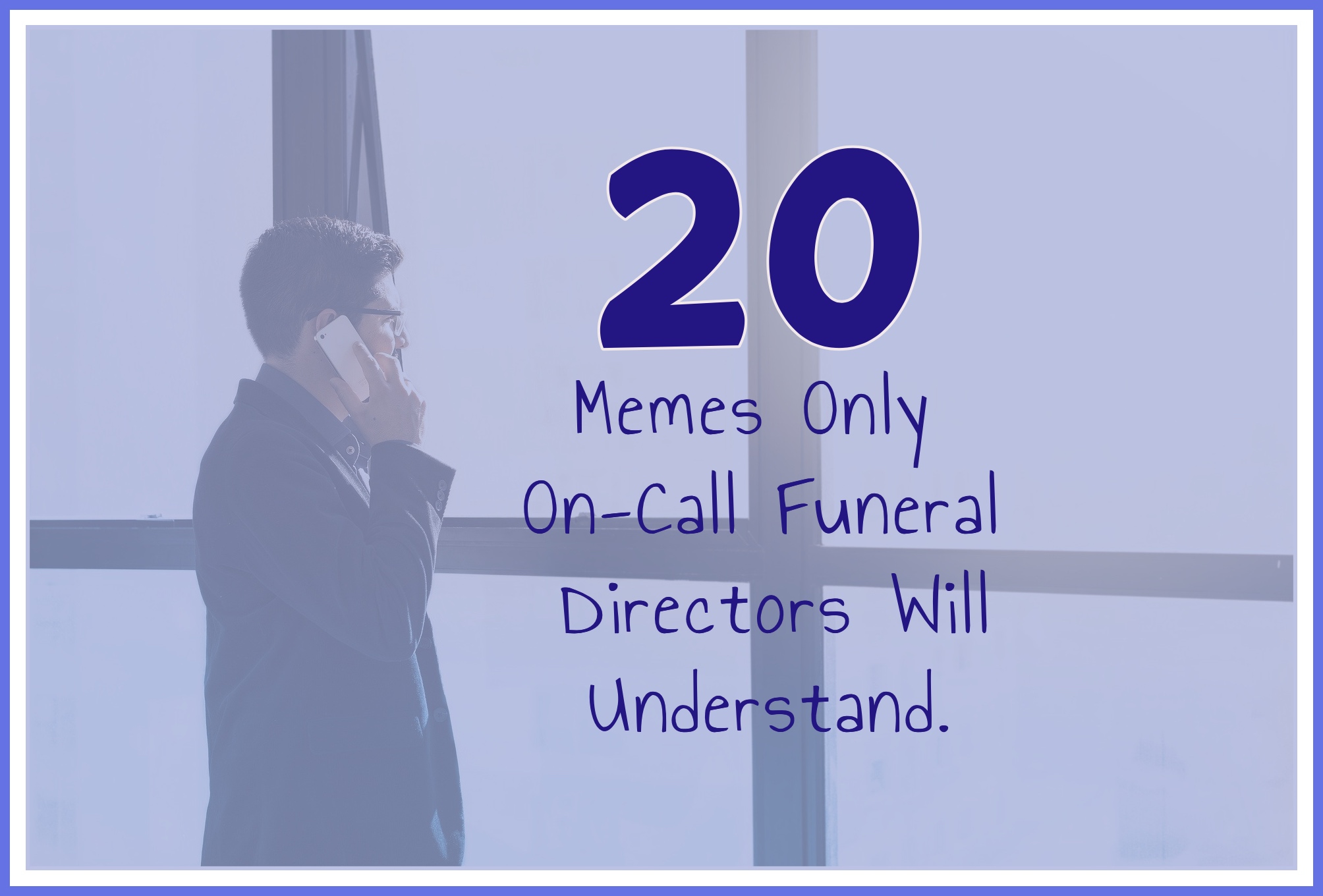 Recently, a comment was posted on ASD’s Facebook page that would have left any other company in the world scratching their head with confusion.

“Ya’ll make me hate the sound of birds chirping,” the comment read.

Immediately, we laughed out loud upon realizing it was written by a funeral director lamenting over being woken up by the sound of an alert in the ASD Mobile app. Chirping birds is one of 30+ alert tones that funeral directors can choose when deciding what sound to hear when ASD needs to alert them of an urgent call or notification of a death. However, we cannot guarantee that funeral directors won’t eventually grow to detest their chosen sound alert. This just one of many unavoidable side effects of working on-call.

While ASD strives to reduce the burdens on-call funeral directors must carry, we understand how much you must shoulder on your own. We hear your tired voice in the middle of the night having to summon both physical and emotional strength before calling back a family in need of your services. There are so many challenges revolved around working on call. Death is unpredictable, and as a result on-call funeral directors arguably have higher variability in their work schedules than any other profession. This, combined with inadequate sleep and extreme FOMO from losing so much time with family and friends, is more than enough to make anyone hate the sound of birds chirping.

We may never be able to solve every on-call challenge you deal with, but what we can do is give you a good laugh once in awhile. We’ve been busy collecting some of the funniest memes and GIFs related to being on-call as a funeral director. Hey, it’s the least we could do considering we’re often the one waking you up in the middle of the night. 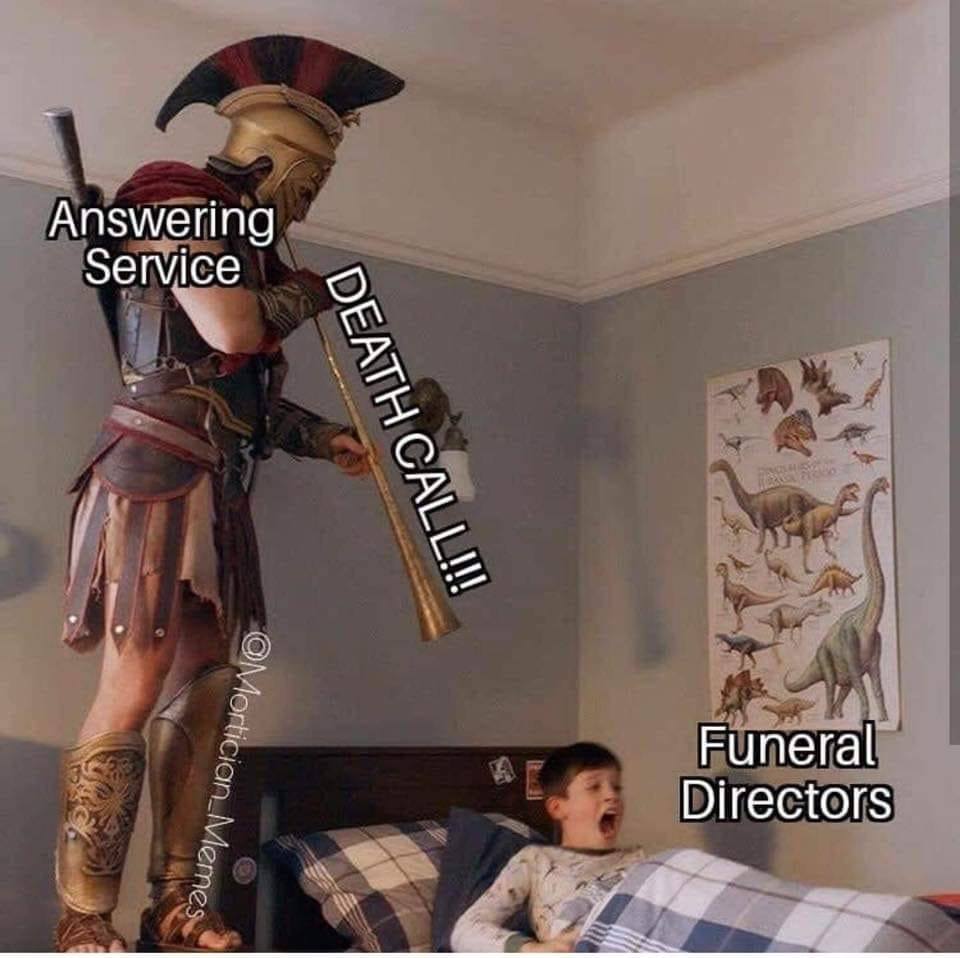 Let’s get this one out of the way first. Now we know why Team ASD did so well in the Spartan race! (Meme credit: Mortician_Memes) 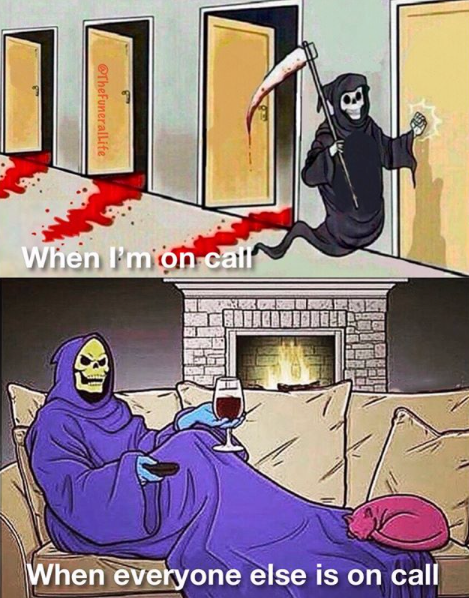 The perfect visual representation of what we meant when we said you have higher variability in your work schedule than other profession. For funeral homes with an alternating on-call schedule, it’s a constant roll of the dice in terms of who will be busy and who might get blessed with a quiet night. (Meme credit: TheFuneralLife) 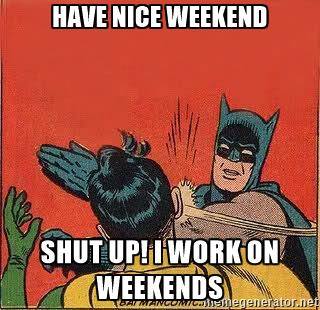 The week does not end when you work in funeral service, you fool!

People often ask funeral directors if they are afraid of ghosts or dead bodies, but this is what REALLY scares them.

For the night is long and full of death calls. (Click here for more Funeral Service Meets Game of Thrones memes). 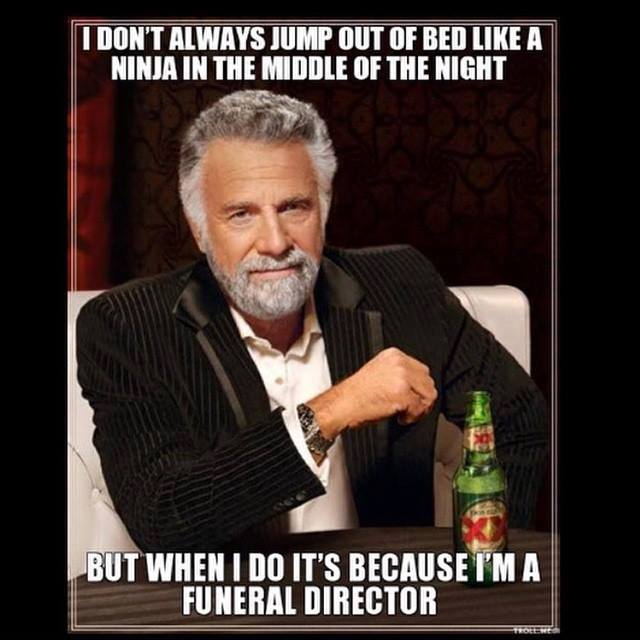 Dedicated to all of your funeral service ninjas! 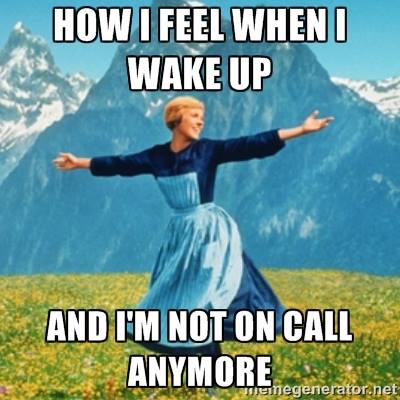 The hills are alive with the sound of the phone…not ringing! 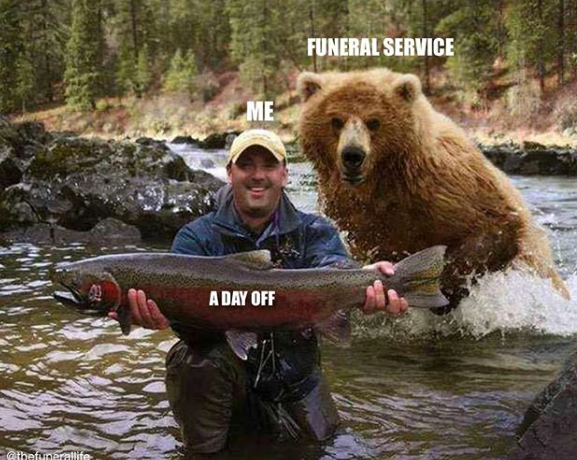 A great meme to represent those weeks when you BEARLY get an hour to yourself. (Meme credit: TheFuneralLife)

While most of the struggles listed on this blog are unavoidable side effects of the funeral profession, this is one problem you can remedy. Rather than giving away your personal cell phone number when you call a family or contact back, you can use ASD’s MobileFH® feature to display the funeral home’s main business line as your outgoing Caller ID (or, if you keep getting funeral-related text messages on your day off, try using our new MobileFH® Texting feature). This ensures families call the funeral home, rather than your cell phone, when they need to reach the office at a later time. 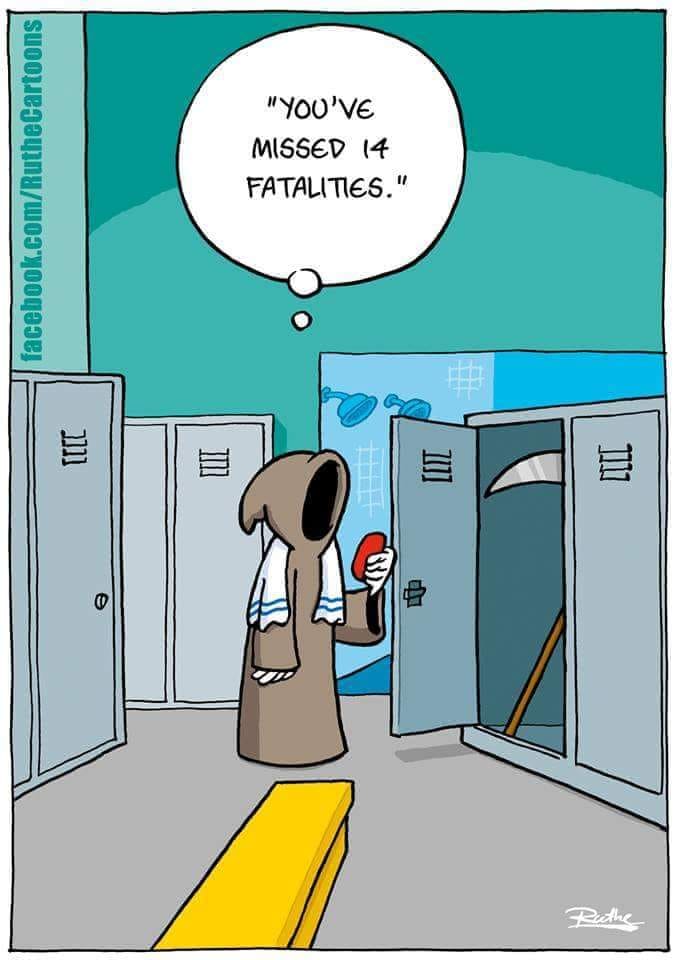 If only death really did take a break every once in a while. 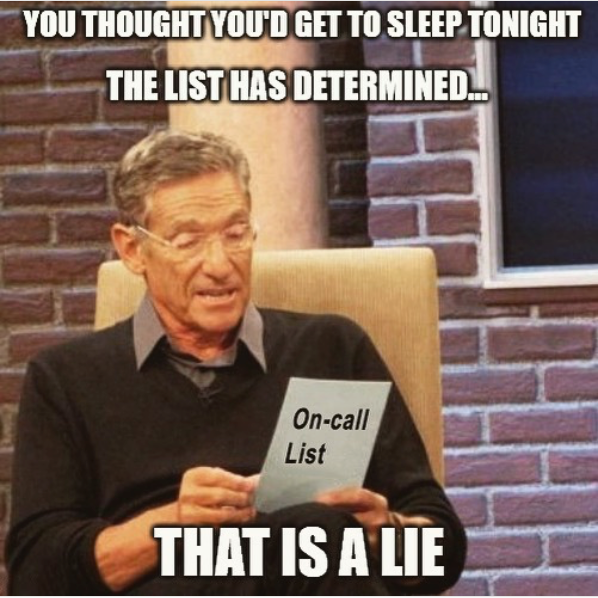 For all those times you wish you had a stage you could run off of while screaming. (Meme credit: Mortician_memes)

Funeral directors are all too familiar with the long night. 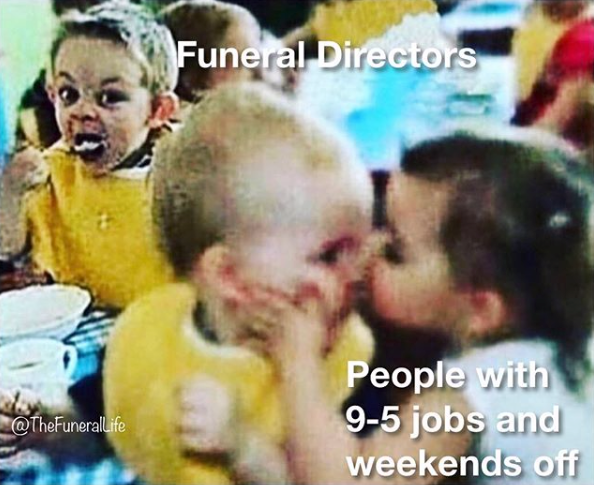 For all those mornings when you feel like you need to superglue your eyes open. 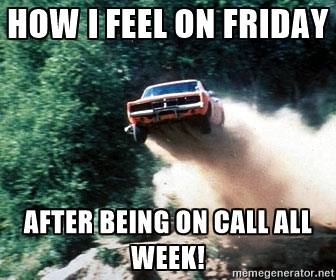 The one upside to being on-call so often: you appreciate your time off so much more! 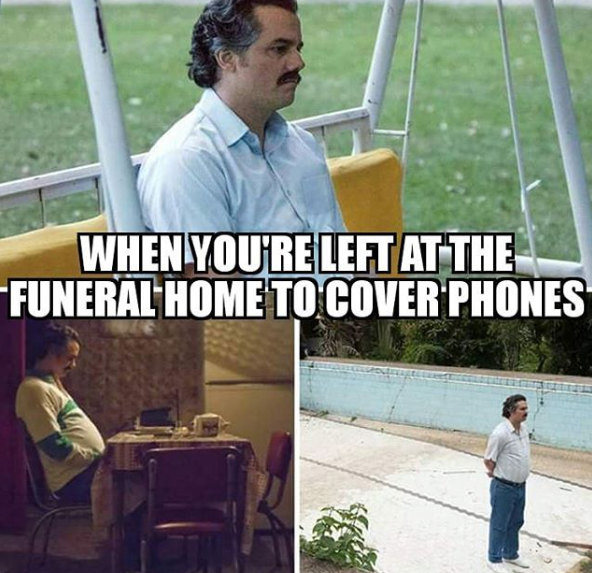 It’s so quiet in here I almost can’t hear my inner monologue saying, “Just forward the phones to ASD.”

When you’re coming up on the finish line but you’re not sure if you’re gonna make it. 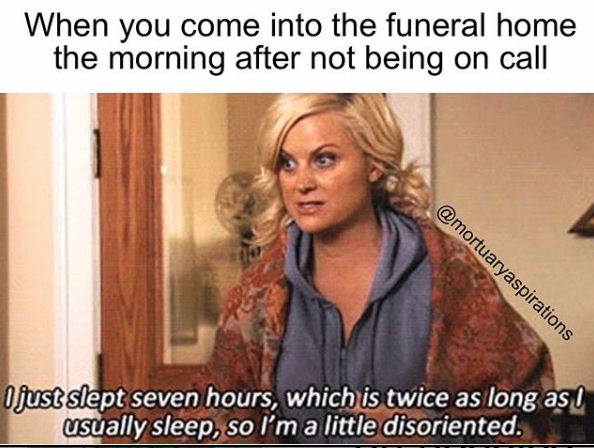 If only you could create your own army of the dead to cover the phones. 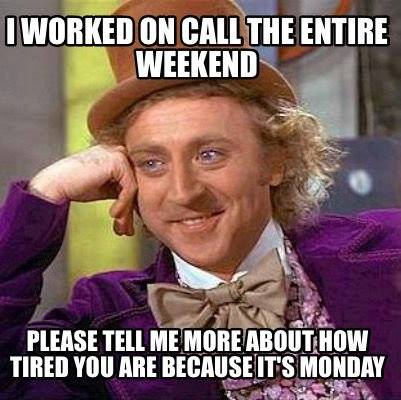 Most funeral directors have grown used to the on-call lifestyle, but when they hear someone who had off all weekend complaining, it can be hard not to respond with this classic Willy Wonka stare.

Want to keep the good times going? Check out our lists of hilarious funeral-related GIFs and memes below.

12 Hilarious GIFS Every Funeral Director Will Appreciate
The Struggle is Real: 11 Hilarious Memes About Funeral Home Problems
8 Memes That Explain Why Funeral Director Hate Death Certificates
9 Funeral-Related Game of Thrones Memes We Created Just For You