The Struggle is Real: 11 Hilarious Memes About Funeral Home Problems 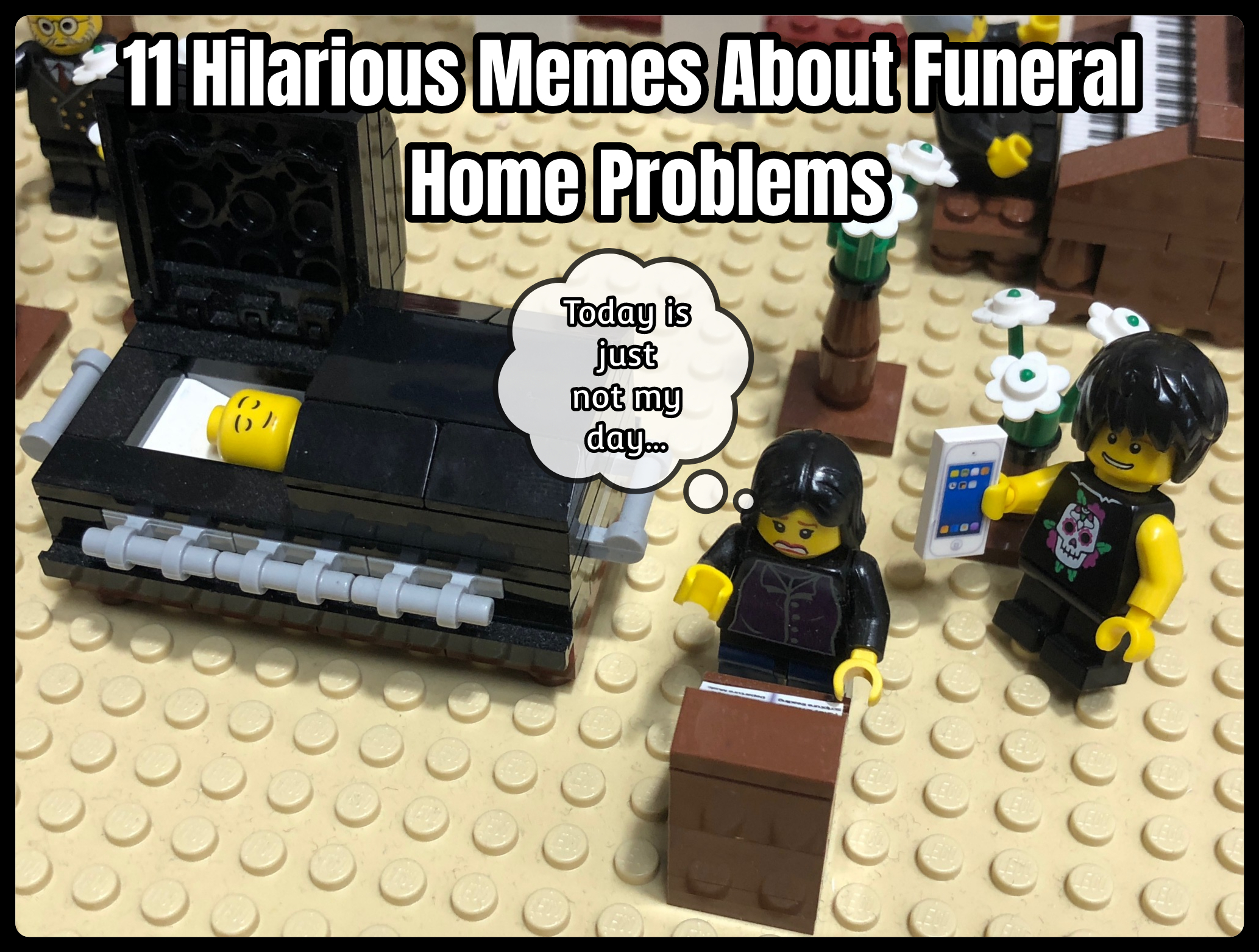 There are a lot of different ideas and philosophies when it comes to funeral service work, but laughter is truly the common ground we all stand upon. Dealing with death on a constant basis is an important reminder life is too short not to stop and appreciate the humor when you can. Working in the funeral business, you know there are many humorous situations and dilemmas that only other funeral professionals could understand.

To illustrate some of these unique challenges, we’ve created a list of 11 memes and GIFs to illustrate the everyday struggles of being a funeral director or embalmer. Hope this gives everyone a good laugh!

It’s been a slow week at the funeral home, but the minute the on-call phone comes into your possession, the darn thing just won’t stop ringing. Funeral directors that work on-call after hours have to adjust to a feast-or-famine workload that can make it difficult to find time to even take a breath. When the calls are coming in non-stop, having a healthy outlet to express frustration is a must. 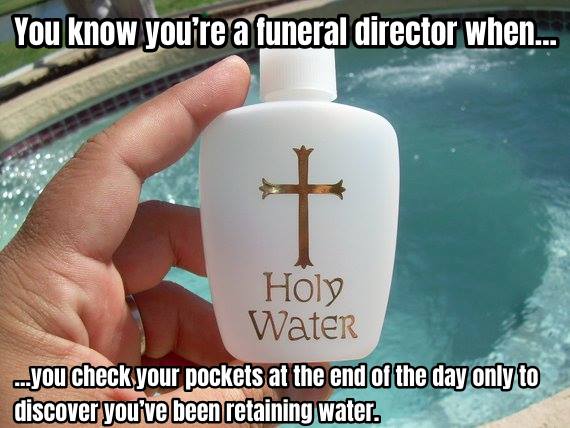 During Catholic burials, funeral directors must often hand the priest a bottle of holy water at the appropriate time to sprinkle over the gravesite. Recently, a funeral director shared with us how he will often forget to leave the bottle in the hearse afterward, resulting in him walking around all day with it in his pocket. In addition to bottles of holy water, a few of our clients shared with us some of the other items they are likely to find on their person at the end of the day, including flower petals, tissues, casket keys, programs, business cards, flower cards, candy, and pins.

When your crystal ball is hazy

Trying to help a family decide how many death certificates they need to order is like the funeral home version of craps. Families almost always need more than they think they will, but it is tricky to predict the right number and directors don’t want to overestimate. As a result, funeral professionals must peer into their crystal ball of past cases to try to win this guessing game.

When 9-to-5 workers start complaining 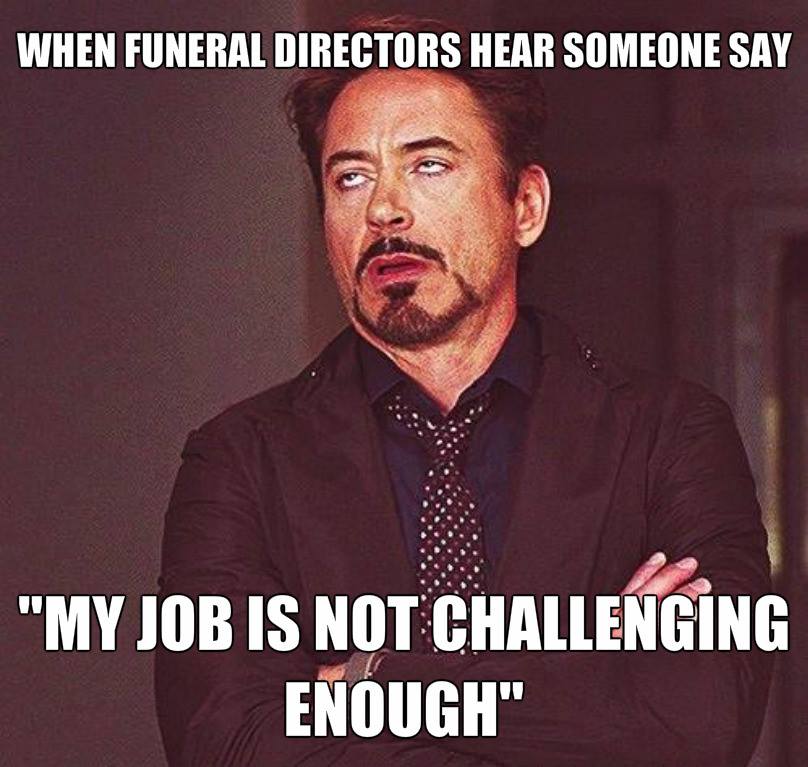 For funeral directors, it is hard to imagine ever being bored by routine when every day presents a new challenge. Often, these challenges can pile up, resulting in a hectic schedule that decreases personal time, creates stress and completely eliminates any memory of a ‘weekend off.’ So, when someone who doesn’t have an on-schedule complains about their job stress, or lack thereof, funeral directors are often hit with an irrepressible need to roll their eyes.

When you really regret giving out your cell phone number

Sharing on-call duties allows funeral home teams to divvy up the workload and take turns handling overnight calls. However, the downside to using your cell phone to conduct business is that it can make it impossible to ever truly disconnect. Families and other contacts will reference your cell phone number from the Caller ID and dial it during times when you are no longer covering the phones.

While most of the struggles listed on this blog are unavoidable side effects of the funeral profession, this is one problem you can remedy. Rather than giving away your personal cell phone number when you call a family or contact back, you can use ASD’s MobileFH™ feature to display the funeral home’s main business line as your outgoing Caller ID. This ensures families call the funeral home, rather than your cell phone, when they need to reach the office at a later time. We’re also in the process of developing a MobileFH™ Texting feature that will allow you to send and receive text messages while having the funeral home number displayed as your sending number. This feature is currently being beta tested and will be available very soon to ASD clients.

When you’re asked about your workout routine 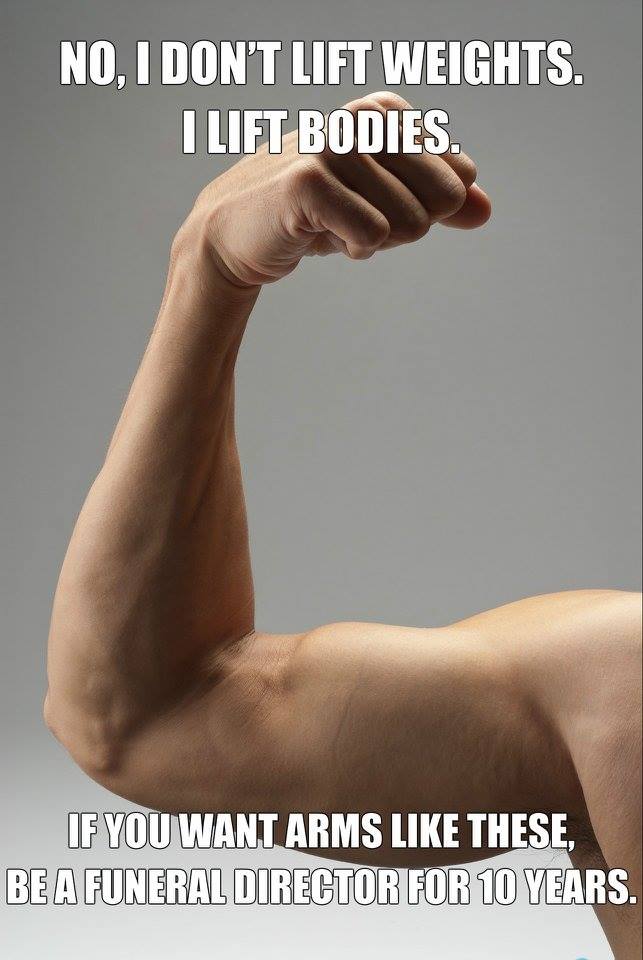 “Suns out, guns out” doesn’t exactly translate when you work in the funeral profession, but that doesn’t mean directors and embalmers aren’t ripped under their tailored suits. While the heavy lifting is tough, funeral directors undoubtedly have the best response to give when asked about their workout regime. Many people don’t quite know how to react when they start a conversation expecting to talk fitness only to learn your biceps were built by transporting bodies.

When work gets in the way of your dating life

We’ve heard from several funeral directors how complicated dating can be for those that work in death care. Between removal calls and embalming deadlines (no pun intended!), the unpredictable schedule can make it very tough to keep plans. When you combine this with the fact that a good percentage of people are just too squeamish when it comes to talking about death, it can create a lot of challenges for single funeral directors. Finding a partner who is adaptable and understanding makes all the difference. (Here are some great funeral home love stories that prove it!)

When death won’t stop following you 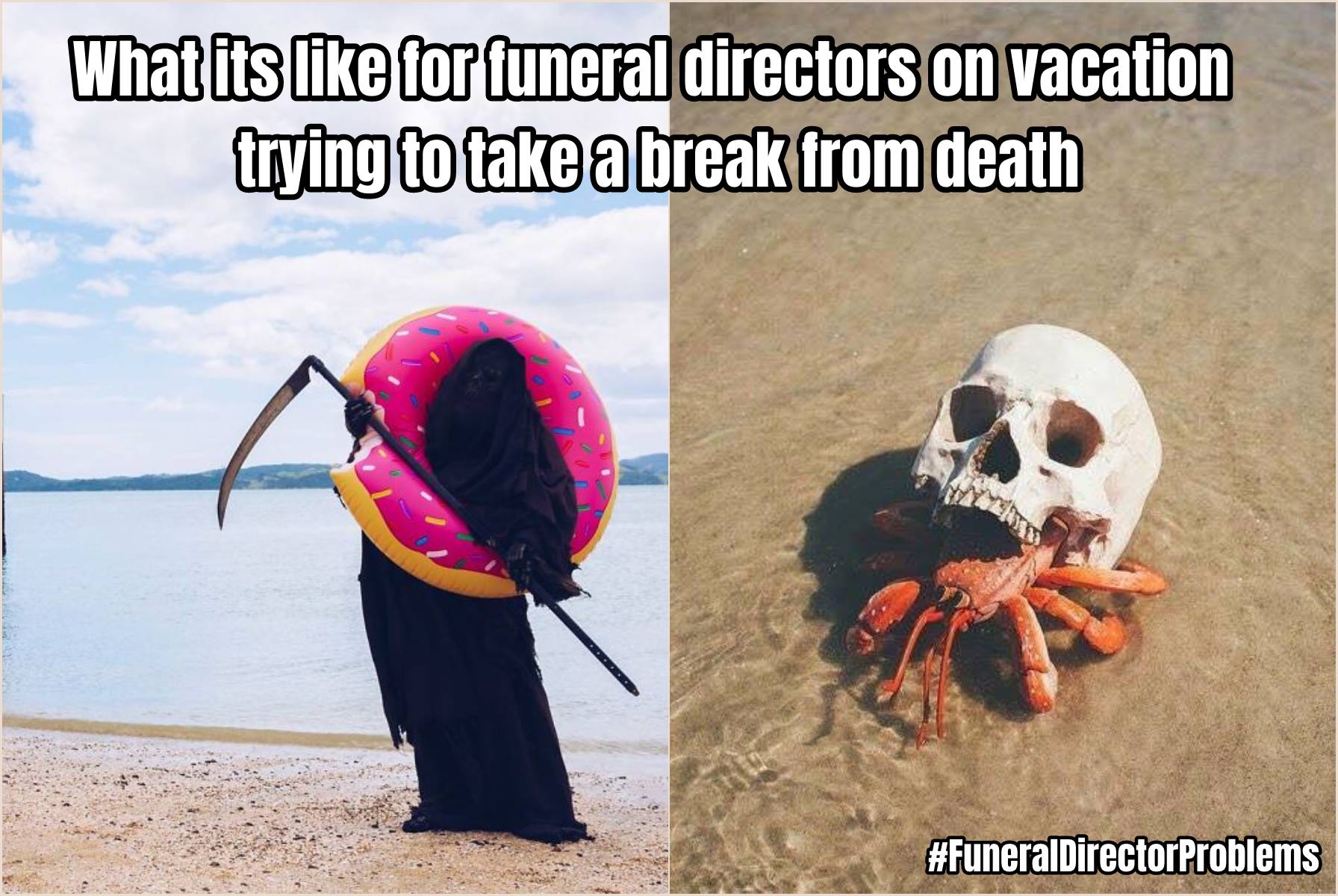 It’s hard to ever disconnect completely as a funeral professional. You spend so much of your time devoted to the 24-hour needs of grieving families, so it’s difficult to entirely cut that cord of communion. This is why the ASD Mobile app has been accessed in 30 different countries. Even if you’re not on-call and have someone covering everything for you at the funeral home, your vocation still follows you on vacation. At least you can laugh about it!

When you forget you’re in a public place

There are some sentences that are only okay if a funeral director is the one saying them. For instance, “my back hurts from carrying that body all by myself” or “I am exhausted from my funeral today and have another tomorrow.” However, if heard out of context, these statements can result in a lot of puzzled reactions from those within earshot. If only there were a funeral director bar where our profession could lament about their day without getting sideways glances from others. In the meantime, trying to avoid accidently freaking out strangers will remain a constant struggle for those that work in the funeral profession.

When someone doesn’t appreciate having the weekend off 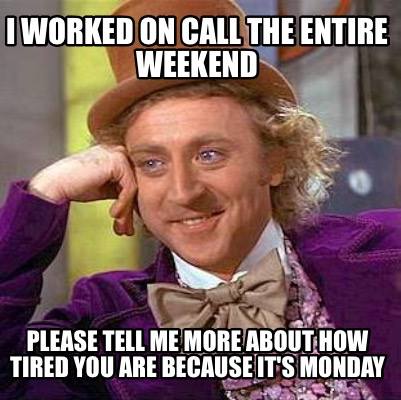 No, you don’t have a case of the Mondays. You have never had a case of the Mondays in your life because you work through the weekend. Most funeral directors have grown used to the on-call lifestyle, but when they hear someone who had off all weekend complaining, it can be hard not to keep a little bit of Gene Wilder from coming out. *slow blink*

When they won’t stop asking questions

What goes on behind closed doors at a funeral home? Since this profession is one of the last remaining work settings that hasn’t been securitized with microscopic precision (mainly due to privacy reasons), there is still a lot of intrigue that follows those who work in death care. While most of the answers can be found with a simple Google search, people are drawn to hearing an insider’s perspective. As a result, funeral professionals are often grilled with question after question when they meet a new group of people.

Plus: 5 Death-Related Memes Guaranteed to Make You Laugh

The memes below have less to do with the actual work of funeral directors and are a bit more on the ridiculous side, but we still thought they would give you a good chuckle. 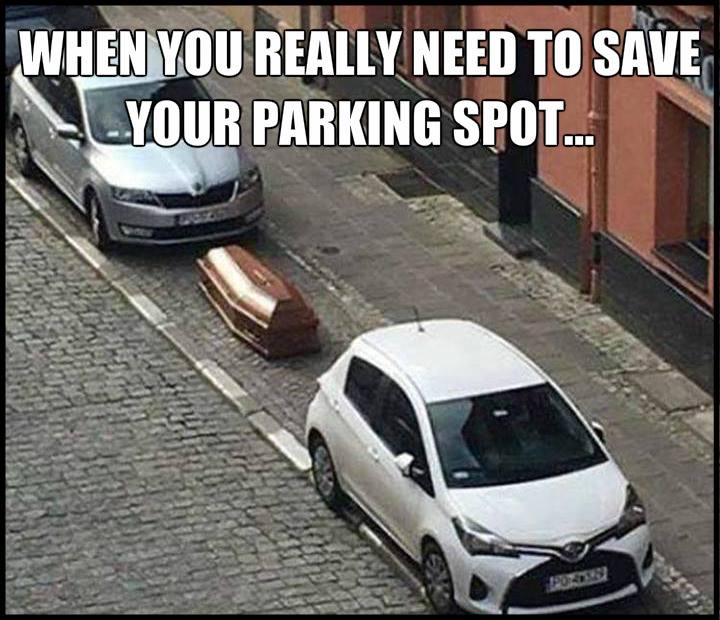 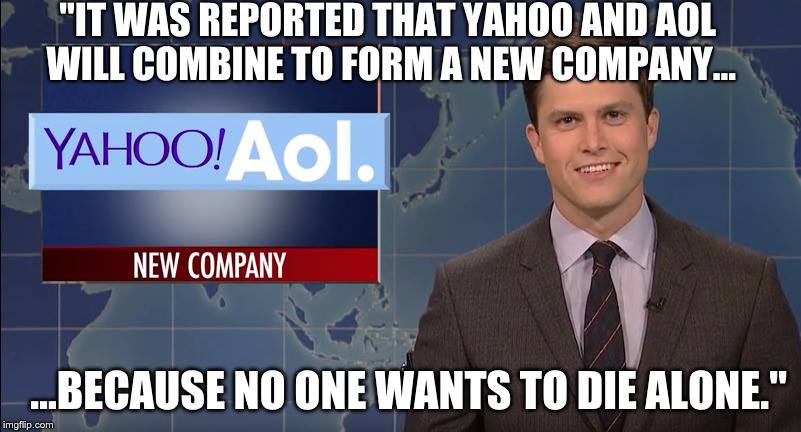 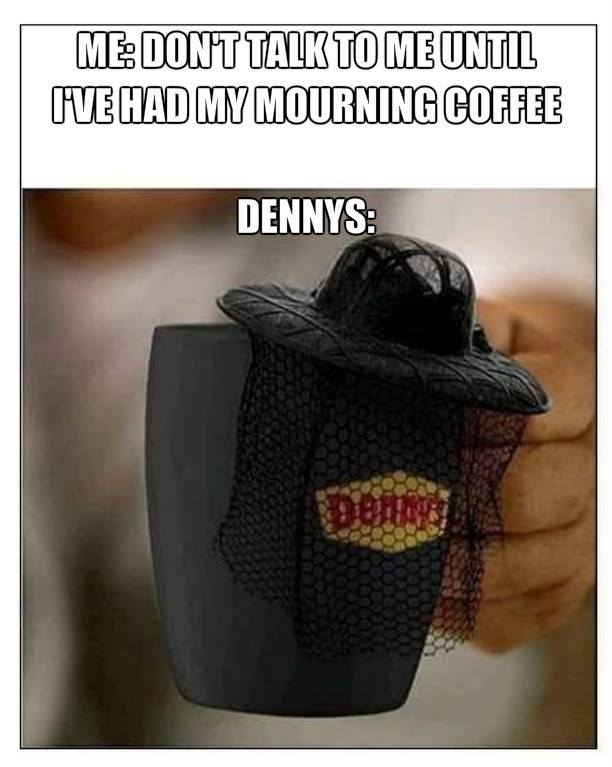 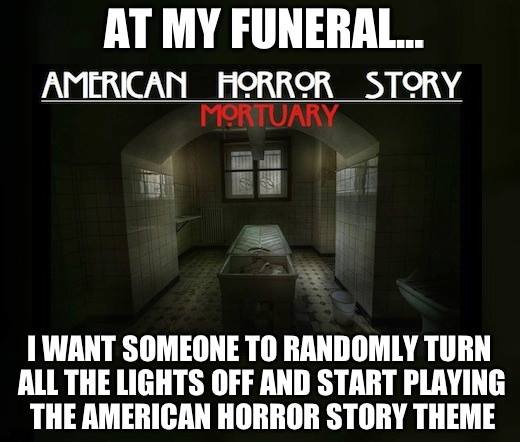 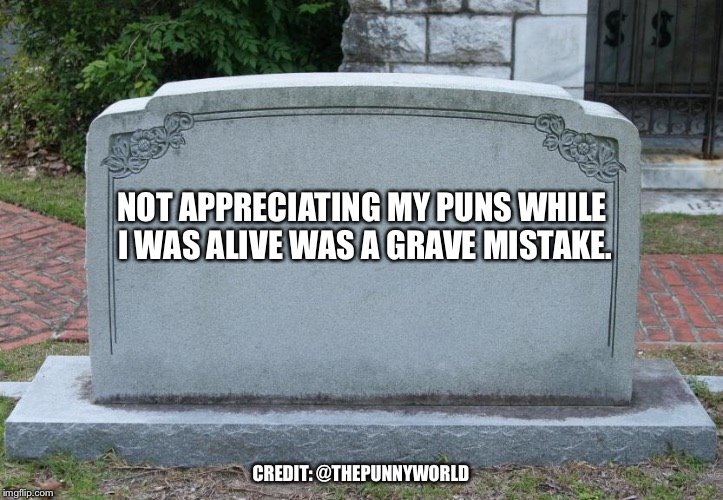 Want to keep the good times going? Check out our other list of 12 Hilarious GIFs Every Funeral Director Will Appreciate or visit our Facebook album of funeral and death related memes, cartoons and e-Cards.