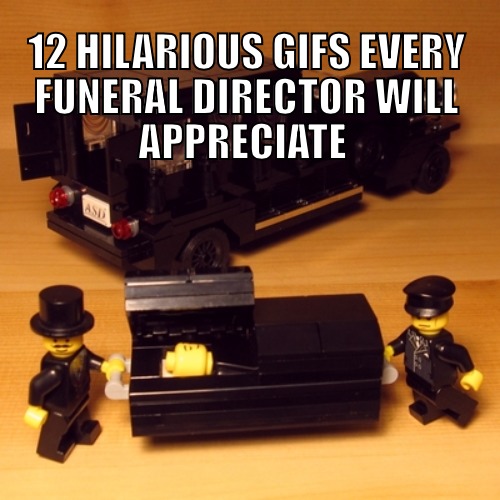 So often, funeral directors must carry themselves in a dignified and solemn demeanor because they never know when they might be approached. However, most people don’t know that secretly, funeral professionals have a great sense of humor. While it may be necessary to maintain complete composure in the public eye, most directors do let loose and have fun when in the right setting. Dealing with death on a constant basis is an important reminder that life is too short not to stop and appreciate the humor when you can.

Working in the funeral business, you know that there are some situations and dilemmas that only another funeral professional could understand. It’s why the #FuneralDirectorProblems hashtag has become a favorite of funeral directors who use Twitter. To illustrate some of the challenges of being a funeral director, we’ve created 12 hilarious GIFs we think every funeral director will appreciate. Be sure to leave a comment and let us know which one made you laugh the most.

No, you don’t have a case of the Mondays. You have never had a case of the Mondays in your life because you work through the weekend. Most funeral directors have grown used to the on-call lifestyle, but when they hear someone who had off all weekend complaining, it can be hard not to fix them with this classic Michael Scott expression.

Okay, so we’re not saying that every doctor puts signing death certificates at the bottom of their priority list, but it sure seems like a lot of them do!

3. If Karma Worked How It Should

Imagine if every time someone broke into a line of cars in a funeral procession, this happened to them.

4. How’d You Get Those Strong Arms?

“Suns out, guns out” doesn’t exactly translate when you work in the funeral profession, but that doesn’t mean directors and embalmers aren’t ripped under their tailored suits. While the heavy lifting is tough, funeral directors undoubtedly have the best response to give when asked about their workout regime.

Normally, you probably wouldn’t mind listening to Father Jim talk for 30 minutes past the end of the service about bible symbolism. But today, you’ve got a burial and luncheon to coordinate before heading back to the funeral home for an arrangement conference. If only you could press the fast forward button once in awhile.

For all those mornings when you feel like you need to superglue your eyes open.

This GIF comes from a real call handled by one of our Call Specialists. It always baffles us just how many people think death certificates can be ordered like take-out food!

This GIF is a throwback to the days before you used ASD when you had to answer every call 24/7. You’d be surprised just how many people call funeral homes late at night about topics like this after spending a little too much time on Ancestry.com.

Bad dreams for funeral directors are on a whole other level.

Whether it’s hot enough to fry an egg on the sidewalk or cold enough to freeze boiling water in mid air, funeral directors must be tough enough to handle it. Extreme temperatures are unavoidable in this profession, but a little humor can help make facing mother nature a bit easier.

Which one of the GIFs on our list is your favorite? Are there any funeral director problems we missed? Leave us a comment and share – we’d love to hear from you!