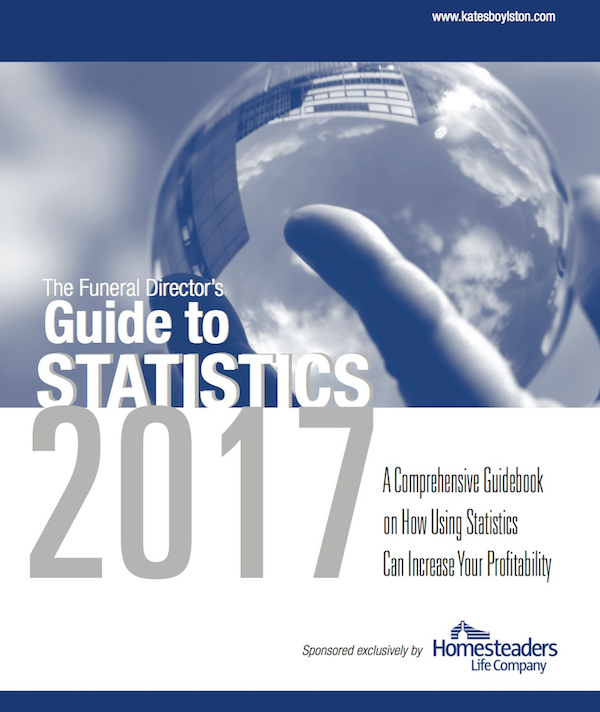 This article was originally published in Kates Boylston Publications Funeral Director's Guide to Statistics (2017 issue) by our Staff Writer, Jessica Farren (Fowler). This latest edition features the most up-to-date statistical information in the industry, and provides you with tools and knowledge to better understand buying trends, what services families want most and more. Click here to learn more or to order your copy of the Funeral Director's Guide to Statistics.

There are two fundamental questions every funeral home’s marketing strategy should address. The first, and most obvious is how do we get the phone to ring? Or, to be more specific, how do we persuade families in our area to contact our funeral home in their time of need? The second question, although equally important, is often overlooked when funeral homes analyze their marketing efforts. How do we ensure that every call, without exception, is answered promptly and handled properly? With so much emphasis placed on attracting interest, funeral professionals must be careful not to forget how communication can impact their funeral home’s reputation and growth.

The survey was conducted by ASD – Answering Service for Directors, the leading funeral home answering service, and was sent by means of a questionnaire using the internet survey tool Survey Monkey. In an effort to construct a thorough analysis of the marketing and communication behaviors of funeral professionals, ASD polled both its current client base as well as funeral professionals who do not use the company’s services.

About 75 percent of funeral professionals surveyed handle more than 100 cases per year. More than a third handle over 300 cases a year. Below is a breakdown of this data. 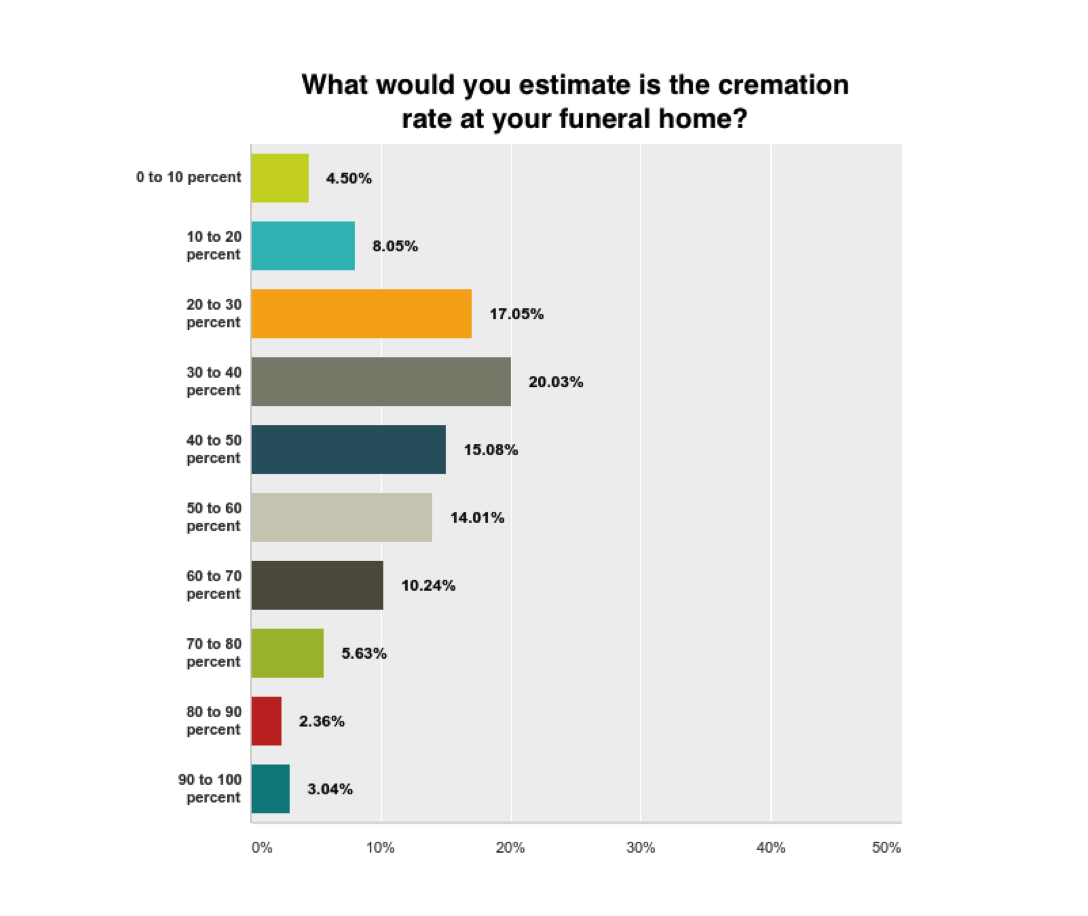 Slightly more than half of the funeral professionals polled (898) have a cremation rate over 40 percent. Below is a full breakdown of this data.

Participants were asked how much attention is given to growing their funeral home’s market share. Nearly half of the respondents (41 percent) answered that a ‘tremendous amount’ or ‘a lot’ of time was given to growing the funeral home business. A nearly equal number (39 percent) of participants selected ‘a reasonable amount’. About 20 percent answered that very little or no time at all is spent growing their funeral home’s market share. These results suggest that while most funeral professionals want to achieve a competitive advantage, a surprisingly high number do not have the time or resources to focus on growth. It is also possible a portion of the funeral professionals interviewed may be less focused on increasing their market share because they feel they have already achieved this objective.

The survey asked funeral professionals to indicate what materials their funeral home uses to market the business and achieve goals. Below is a breakdown of the most commonly utilized marketing materials listed by survey participants.

This data reveals how marketing can often take a backseat to other business matters within a funeral home. While more than half of those surveyed have implemented at least one type of marketing initiative in the past, these statistics suggest a lack of consistency and follow through may hinder results. Less than half of survey respondents utilize a business or marketing plan when implementing different strategies. These statistics indicate that many of the marketing efforts used by funeral homes may be executed without a focus on long-term goals. The old mantra, ‘throw it against the wall and see what sticks’ seems to be governing these decisions, leading many to adopt a trial-and-error based approach. Without such a business or marketing plan in place, funeral directors may begin to see marketing efforts as fruitless because they have not created metrics for tracking results. 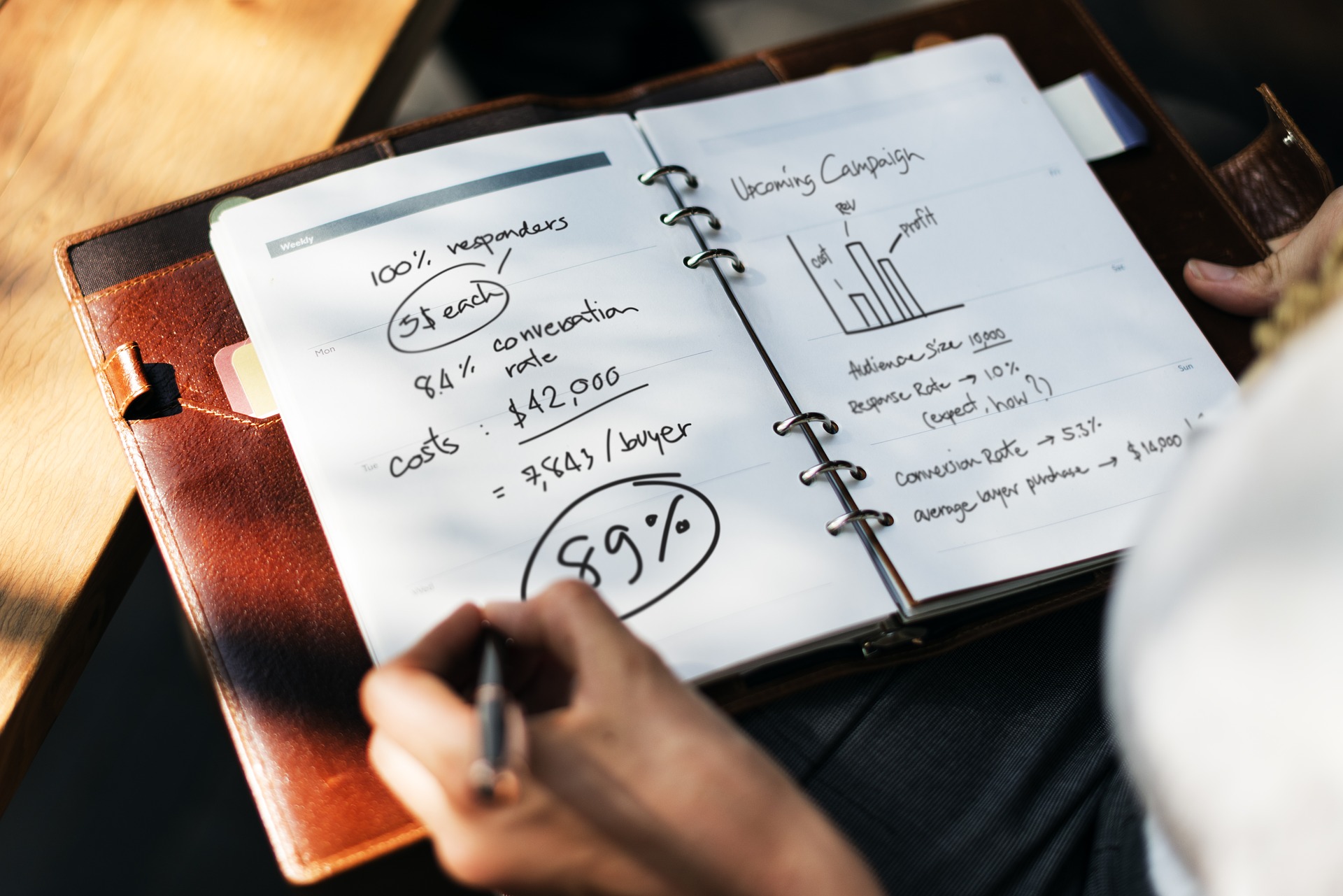 Another example of this lack of focus was revealed by asking funeral professionals how they market to families they have previously served. While more than half (55 percent) send out surveys to families they have served in the past, only 19 percent send newsletters or bulletins. The data reveals a surprisingly high number of outreach opportunities are being missed by funeral homes. Newsletters and bulletins allow funeral homes to expand their aftercare programs and help their community to view them as a resource. While it is certainly helpful to gather feedback from families, it is just as important, if not more so, to maintain these relationships and demonstrate your funeral home’s ongoing support. These two marketing goals should be closely aligned, yet more than 80 percent of funeral professionals surveyed did not make this connection.

ASD also asked survey participants if they currently utilized a marketing company to promote their services. Less than half (48 percent) are currently using a marketing company. This number reveals many of the funeral homes that have created marketing materials and strategies have done so with little to no guidance. 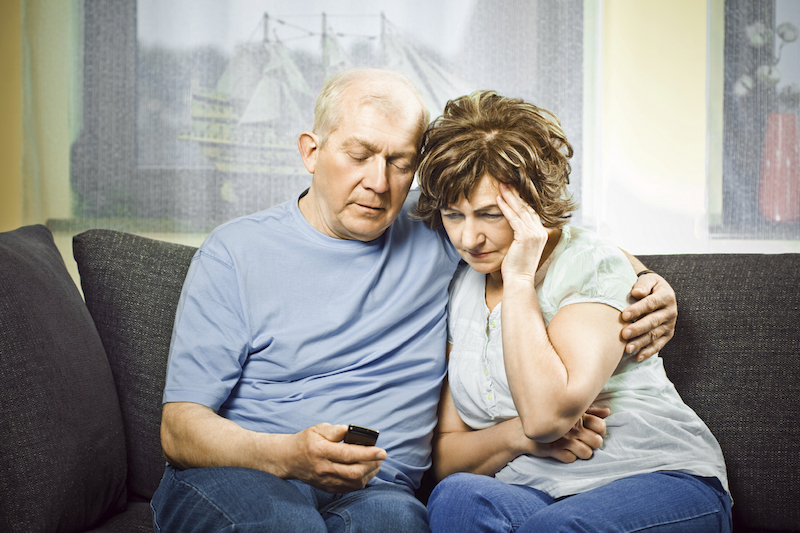 How much time do funeral professionals typically spend answering questions from shoppers? The majority of survey respondents (38 percent) answered that the average duration of these calls is 5 to 10 minutes. Only one quarter of survey respondents spend more than 10 minutes on average when handling shopper calls. Below is a full breakdown of this data.

ASD asked participants what telecommunication problems their funeral home has experienced in the past 12 months. Below is a breakdown of the most common disruption issues that affect funeral professionals:

Cellular service problems were the most common issue reported, which is consistent with national statistics. According to Pew Research, 72 percent of cell phone owners in America have experienced dropped calls occasionally, while 32 percent say they experience this problem on a weekly basis. Mobile reliability statistics vary greatly by region, with consumers in urban areas experiencing the highest number of overall network problems (J.D. Power).

The second most common issue reported was power outages. This is a widespread issue that has increased in recent years, with the U.S. Department of Energy data showing that the number of reported power outages in the country rose steadily between 2000 and 2014, with the annual average of outages doubling every five years. In fact, The United States endures more blackouts than any other developed nation. According to Inside Energy, “An aging infrastructure, combined with a growing population and more frequent extreme weather, are straining the electric grid.”

Participants were asked to identify the key communication challenges facing their business. Below is a breakdown of this data:

Three out of every four people surveyed felt that growing their funeral home was a crucial communication challenge facing their business. Considering the fact that less than half of the survey participants actually own a portion of their funeral home, these numbers demonstrate how increasing demand for services is a major focus for every person working at a funeral home, not just owners.

It is interesting to note that while the majority of the funeral professionals polled recognize business growth as the most important challenge, most funeral homes (52 percent) do not use a marketing company and about 15 percent do not use any marketing materials. This indicates many funeral homes are unwilling or unable to invest in marketing despite recognizing the challenges of attracting new families.

Another interesting finding is the percentage of funeral professionals who identified internal communication as a key challenge faced by their business. More than half (61 percent) were concerned with improving staff skills/knowledge, improving internal processes/procedures or both. While growing the business is priority one, many also find it challenging to keep their staff working cohesively and efficiently. 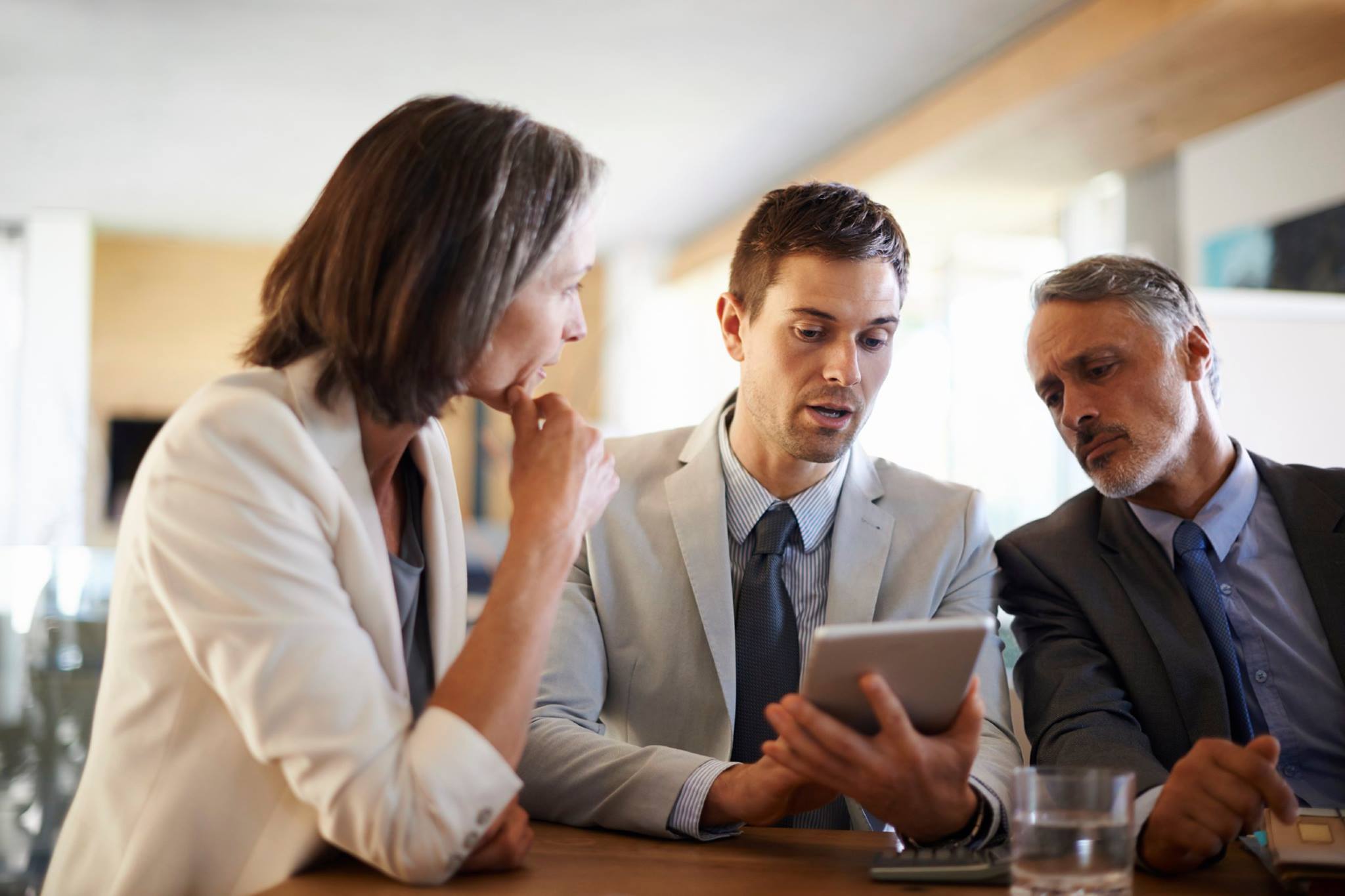 Funeral professionals surveyed were asked how much training their funeral home provides to staff on telephone etiquette. Responses were split almost right down the middle with nearly half of respondents (41 percent) answering that a ‘reasonable amount’ of training was provided to staff. A third answered that a ‘tremendous amount’ or ‘a lot’ of telephone training was offered to their staff, while a nearly equal number (29 percent) answered that ‘very little’ or ‘no training at all’ was provided.

Survey participants were asked about their firm’s documentation process for training materials. About 42 percent have documented operational policies, processes and procedures in their funeral home. Nearly a third (29 percent) have instructional guides and training manuals for their staff.

Of the 1471 survey participants who responded, 91 percent were satisfied with their current cell phone company.

Comments made about mobile apps by survey respondents:

“ASD Mobile. Great to have the call right there and to know there is a first call up to 10 minutes before the "call" is live, plus the ability to go back to track calls as well.”

“Dropbox is excellent. With this app, we can access and send copies of our General Price List, casket selections, and items such as readings for funeral mass, prayer card selections. It makes it so easy to help those who are making arrangements out of state.”

“Vital Ice. We made this app available to our entire community for free download to assist our local first responders.”

Are you surprised by any of the findings of ASD's Communications? Leave us a comment - we'd love to hear your thoughts on our survey results!