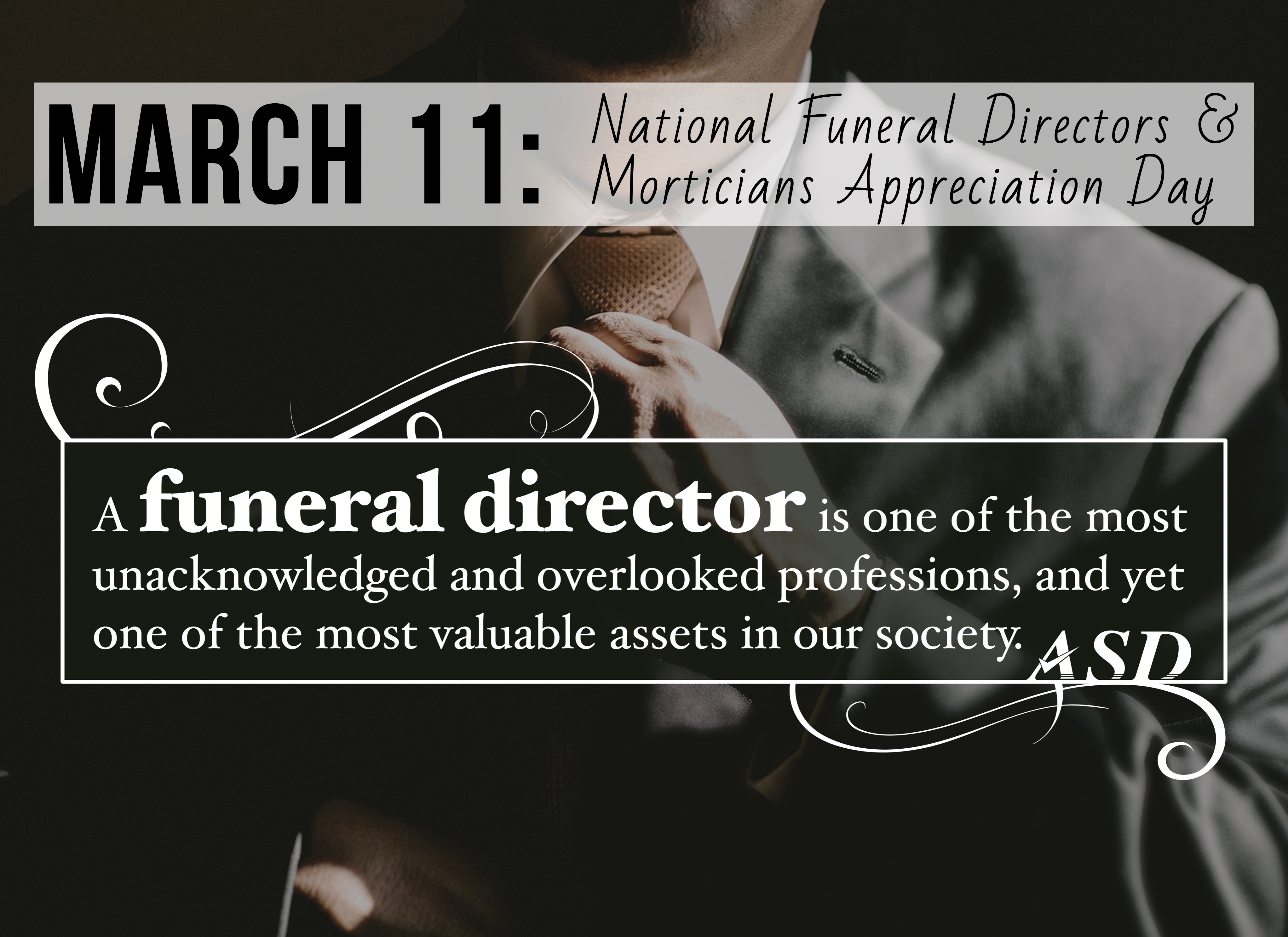 Twelve years ago on this date, the 110thCongress of the United States passed a very important, though somewhat overdue, resolution. The resolution known as H. RES 892 officially designated March 11th as National Funeral Directors and Morticians Recognition Day. The day was established to acknowledge the essential work of funeral service professionals and express support.

"Whereas these special men and women see their chosen profession as a higher calling, a sacred trust, in serving every family regardless of social standing, financial means, or time of day or day of the year, whenever a death occurs; and whereas March 11 would be an appropriate day to designate as National Funeral Director and Mortician Recognition Day to pay tribute to these funeral directors and morticians who, day in and day out, assist our Nation's families in their times of sadness and grief and help families mourn a death and celebrate a life." - H. RES. 892, passed by the 110th Congress of the United States.

This date in history is very significant because it represents the first time our government attached importance to the work of funeral professionals. The fact remains, even with a national day, funeral directors are largely unrecognized by our culture. Many people outside of the profession are unaware of the different characteristics and personality traits one must possess in order to be a funeral director. An even greater number of people are unfamiliar with the many sacrifices funeral directors make on a daily basis in an effort to provide the highest level of support to families in need. The video below is just a snapshot of all the different ways funeral directors extend themselves to others 100%, often donating services, giving back to their communities and stepping up when a major crisis occurs.

Here at ASD, we know that funeral service community is made up of some of the most dedicated and kind-hearted people one could ever meet. We feel honored to serve such an incredible profession. We believe in doing everything we can to raise awareness and to show our appreciation for one of the hardest working groups of people you'll ever meet. In honor of National Funeral Directors and Morticians Recognition Day, we wanted to shine a spotlight on what makes funeral directors special. 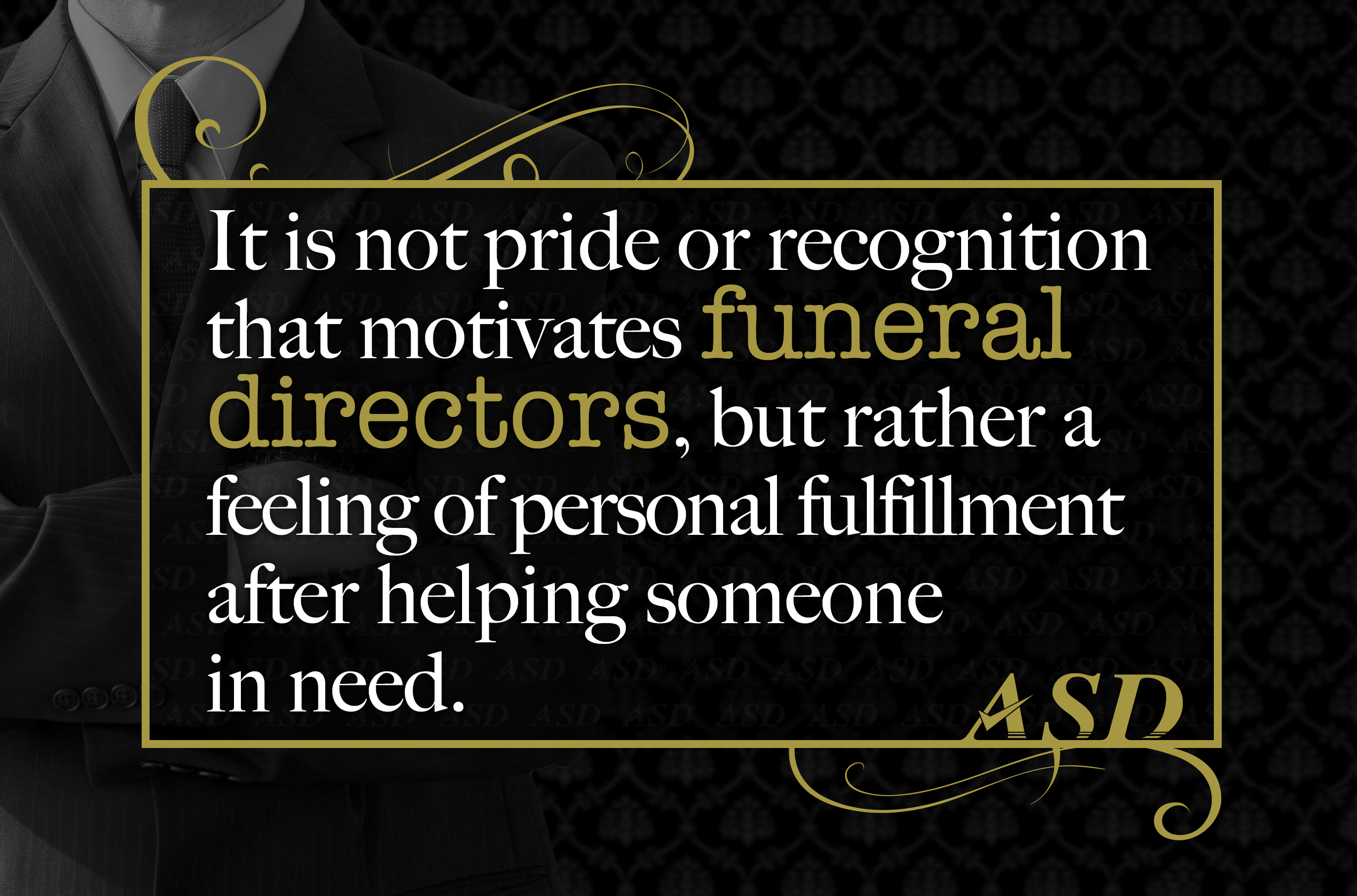 The purpose of becoming a funeral director is not to seek out recognition or awards. Those that become involved in this work are answering a deeper calling – one that motivates them to seek purpose by helping those who are suffering. 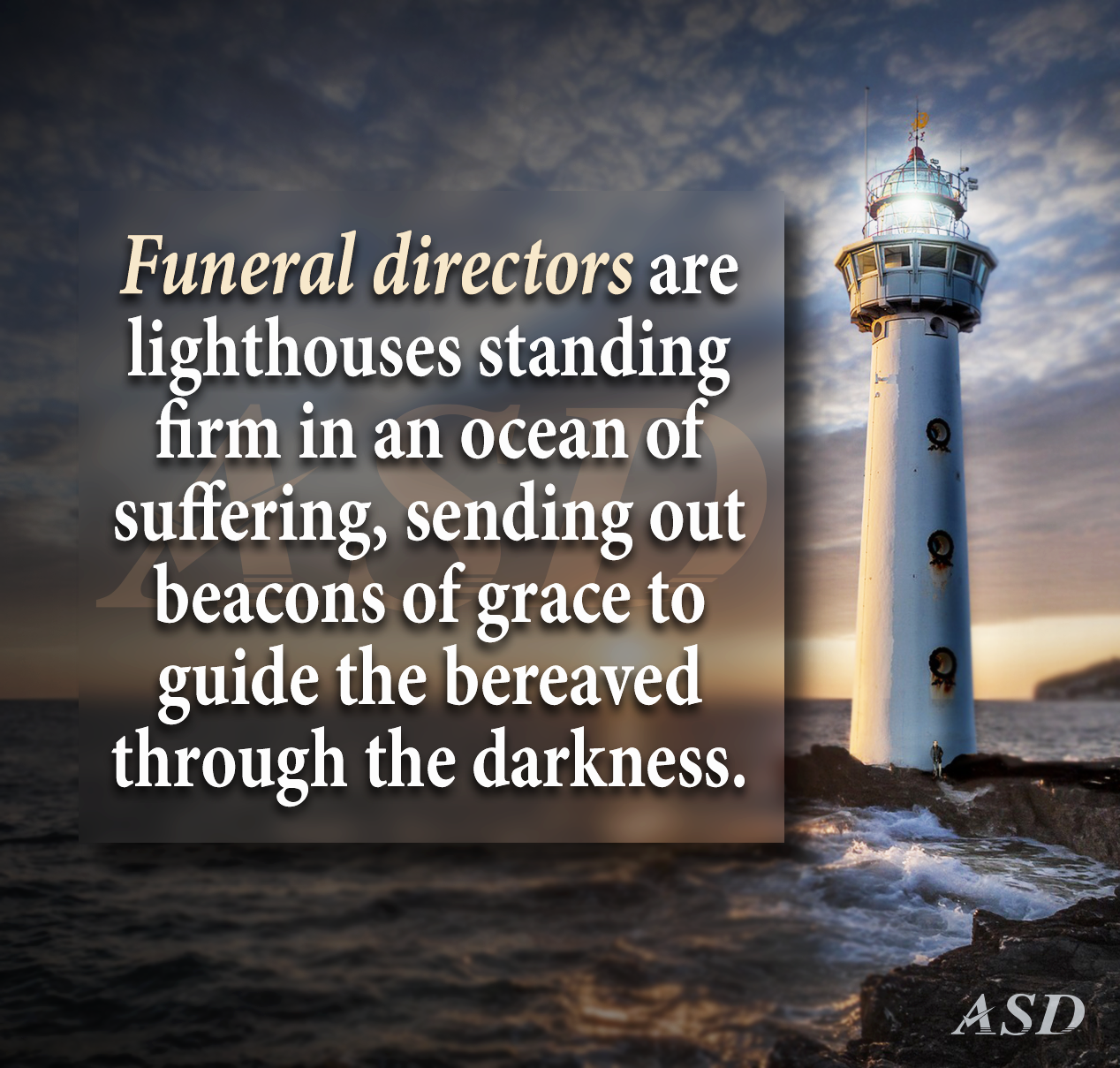 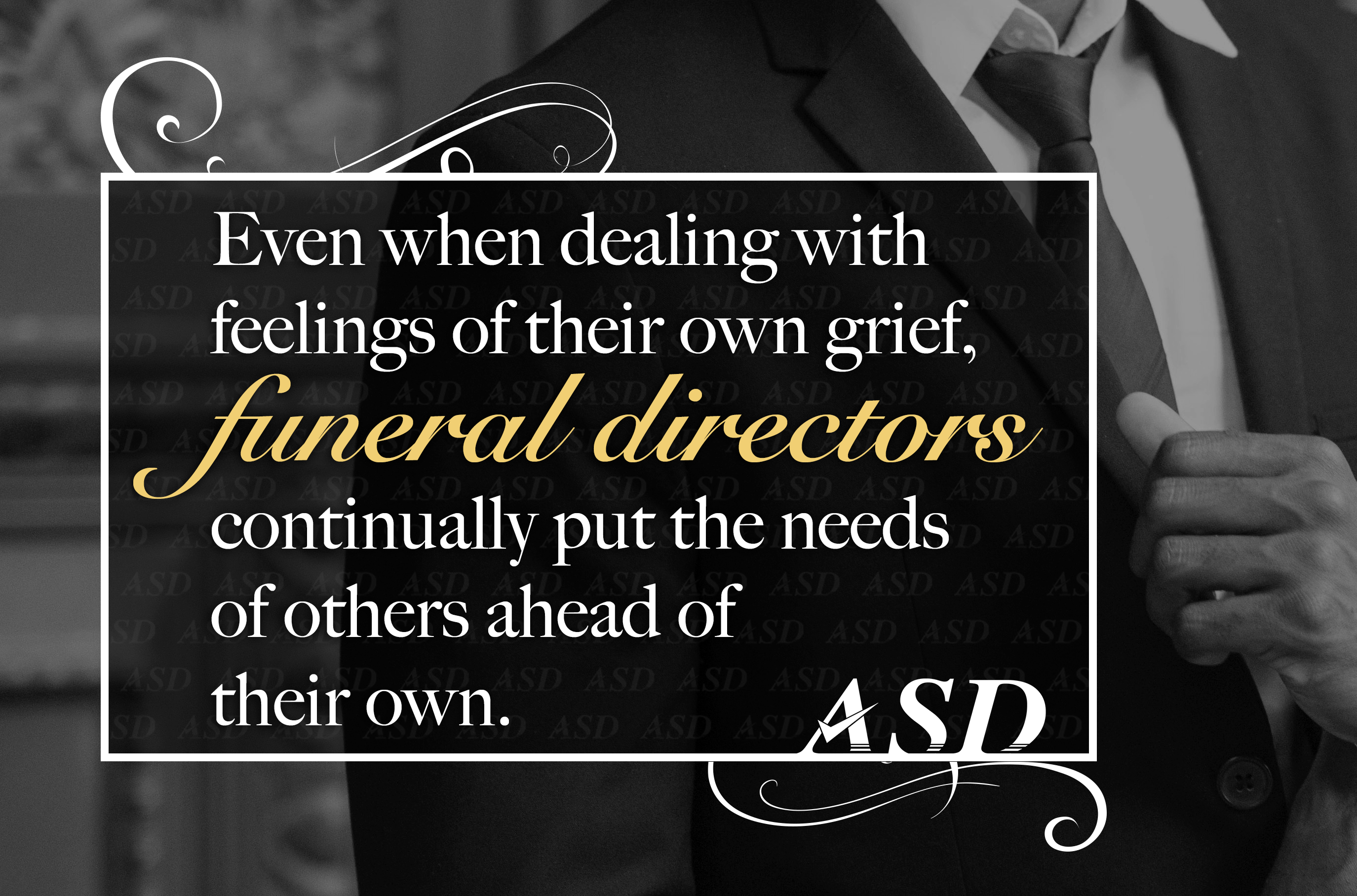 Just about every person who walks on this earth must confront a major tragedy at some point in their lives. Grief triggers are abundant for anyone who has ever lost a loved one, but funeral directors, those painful memories often resurface on a daily basis due to the nature of their work. Rather than being able to let out those feelings of grief, funeral directors must often push aside their own personal tragedies in order to focus on the families they are serving. For those working outside the funeral profession, it is difficult to fathom how much of a personal sacrifice this must require. 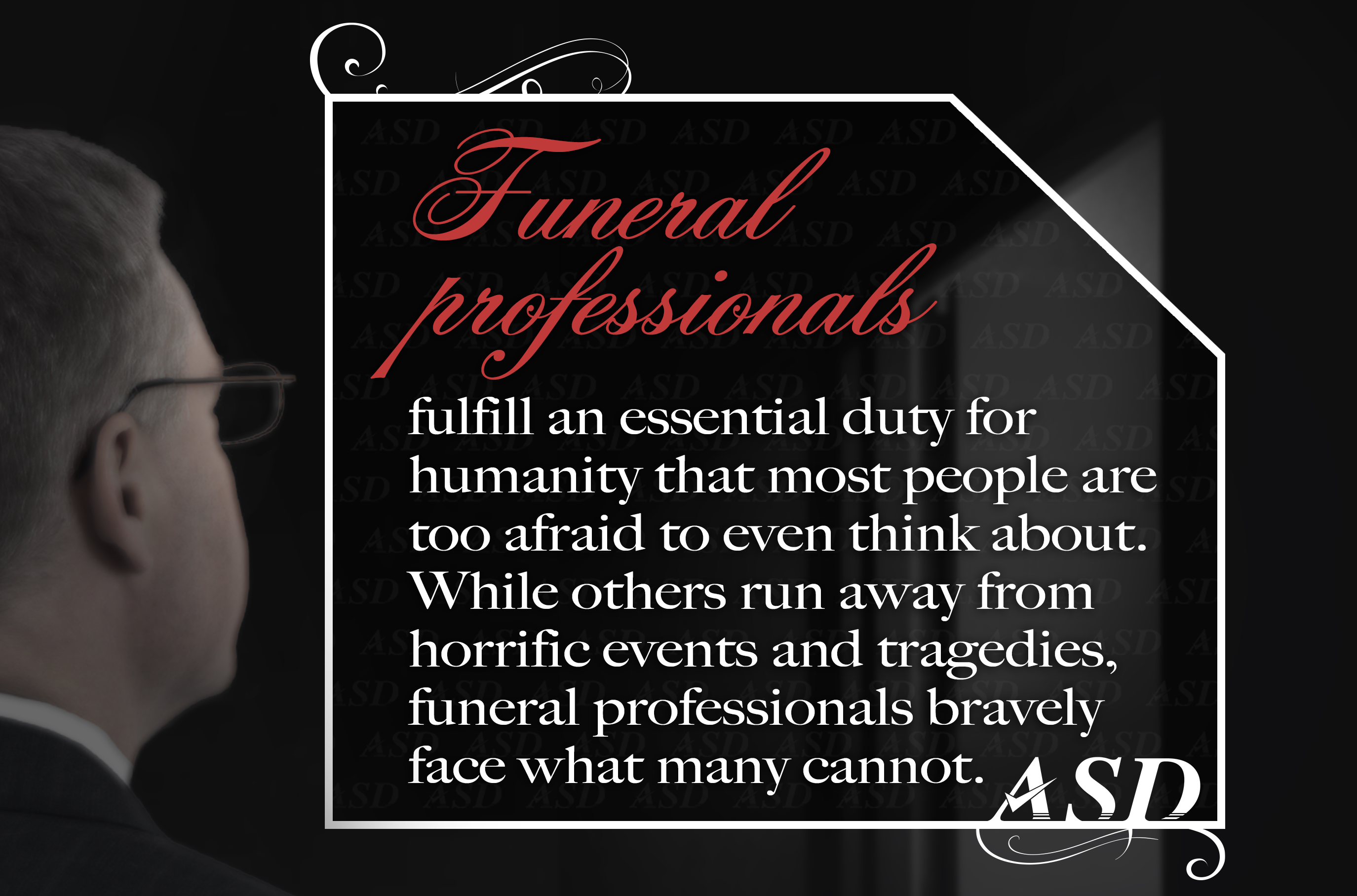 One of the often-overlooked side effects of working in funeral service is Post Traumatic Stress Disorder. Secondary trauma and PTSD represent a serious group of related problems for people who care for, hear about or witness the intense suffering of others. Funeral directors are especially vulnerable to these conditions due to the tragedies they witness so often. 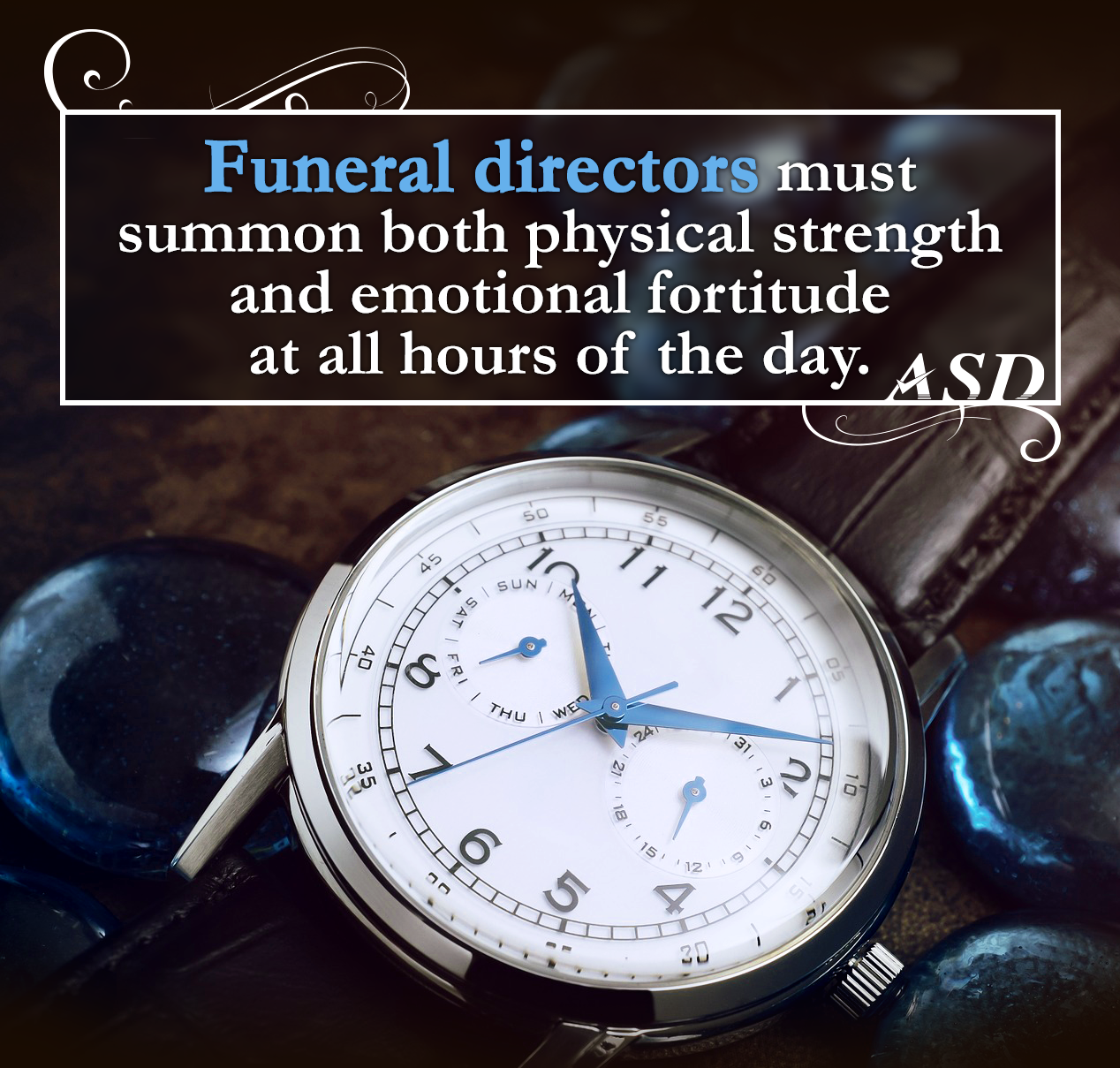 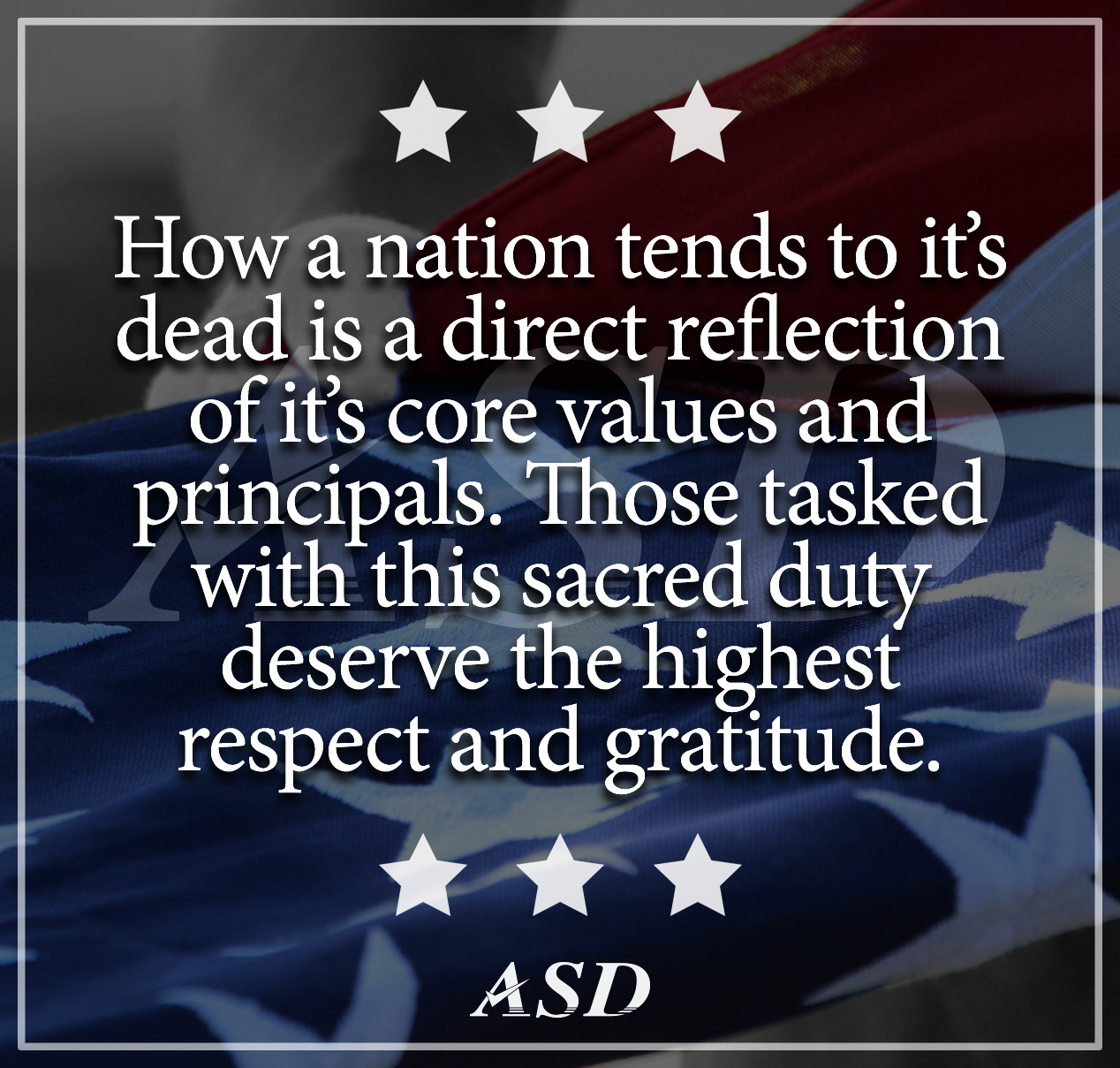 William Gladstone once wrote, “Show me the manner in which a nation cares for its dead and I will measure with mathematical exactness the tender mercies of its people, their respect for the laws of the land, and their loyalty to high ideals.” These words encompass why the work of funeral directors is essential for the morality and righteousness of mankind. 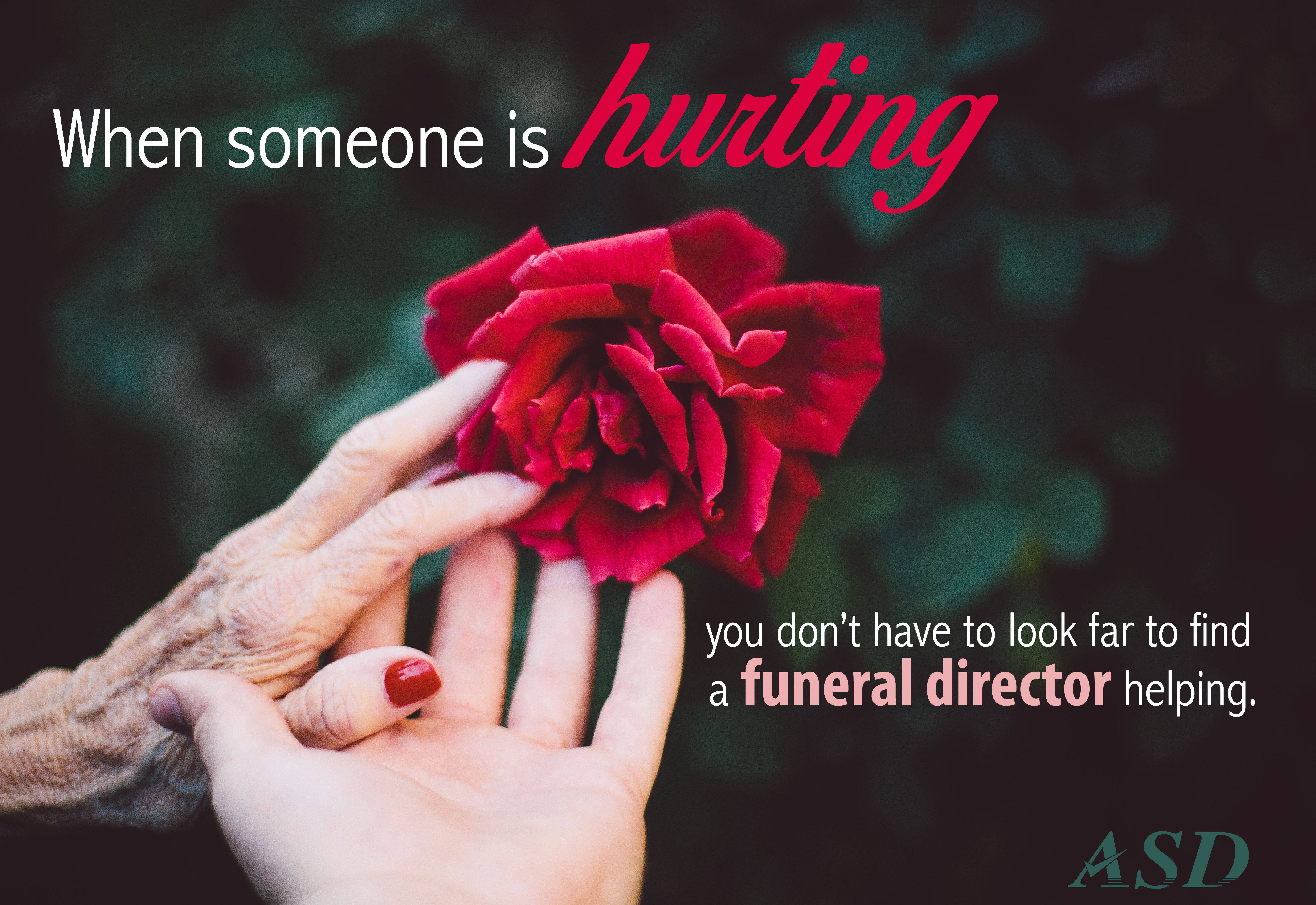 The philanthropic efforts of funeral directors have helped countless people to rebuild their lives after a tragedy. These acts of goodwill rarely get the recognition they deserve, so we at ASD wanted to shine a spotlight on a few of the many selfless funeral professionals out there that have gone above and beyond to help others. From donating services, to honoring veterans to giving back to their community, funeral directors demonstrate how much they care with their actions. 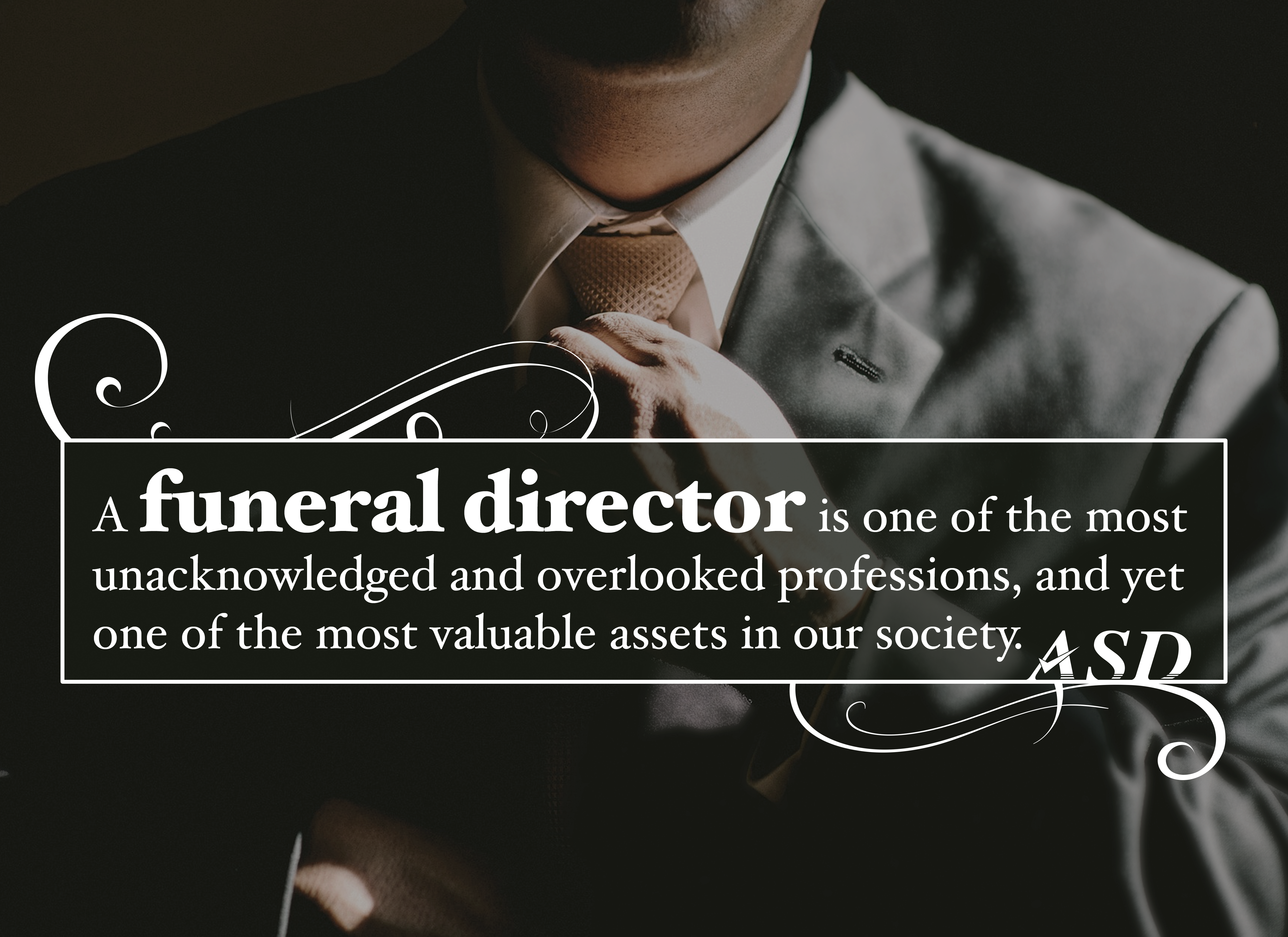 Being continually misunderstood by the public and misrepresented by the media doesn’t stop funeral professional from doing praise-worthy work. Every single day, behind the door of a funeral home, a truly beautiful moment is taking place that demonstrates the power of remembrance. Most of these moments are private, unseen by others outside of the funeral service community and the families they serve. Just because there are no images of funeral directors carrying people from a burning building does not meant that they do not rescue people in turmoil on a daily basis. 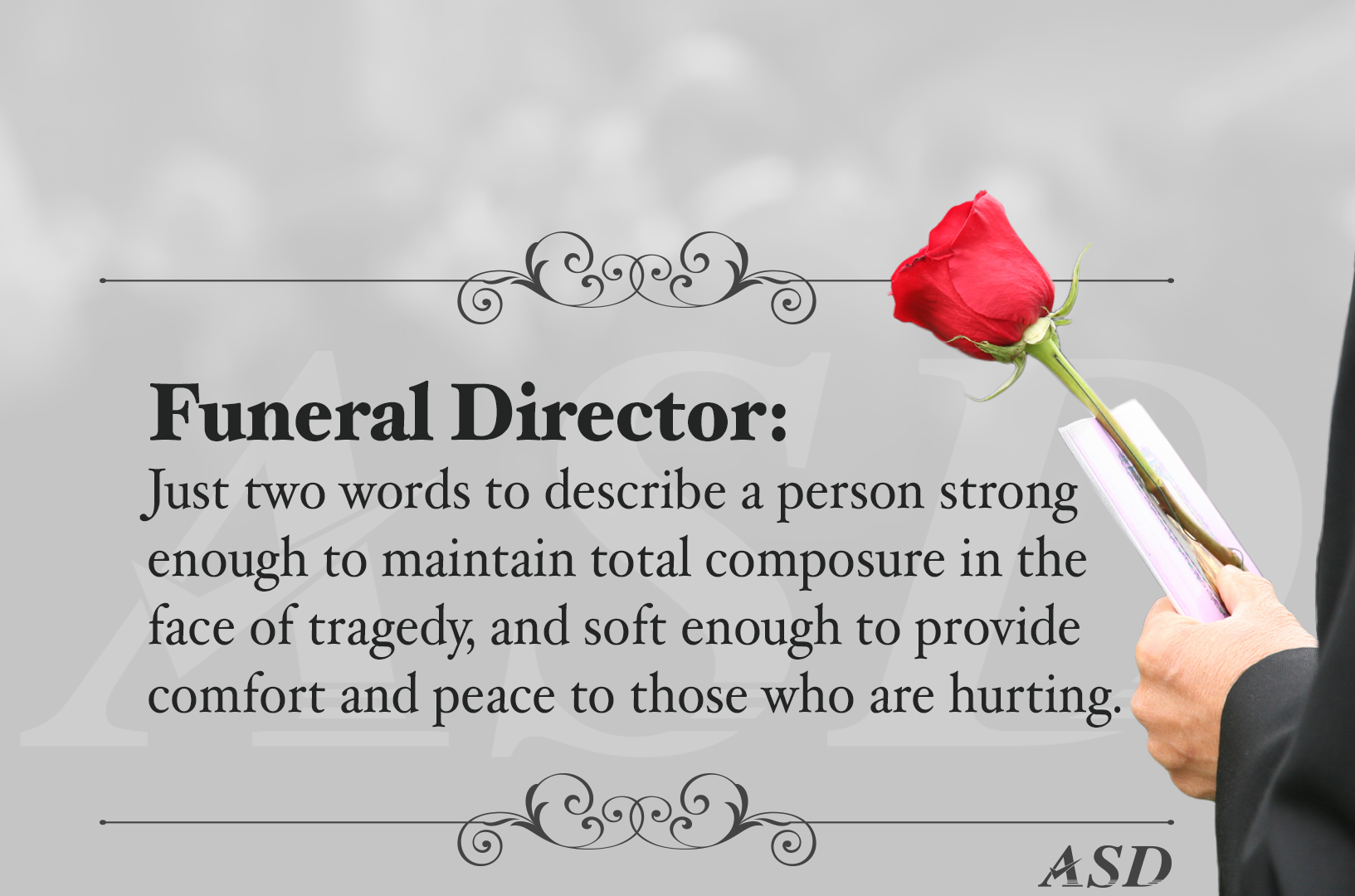 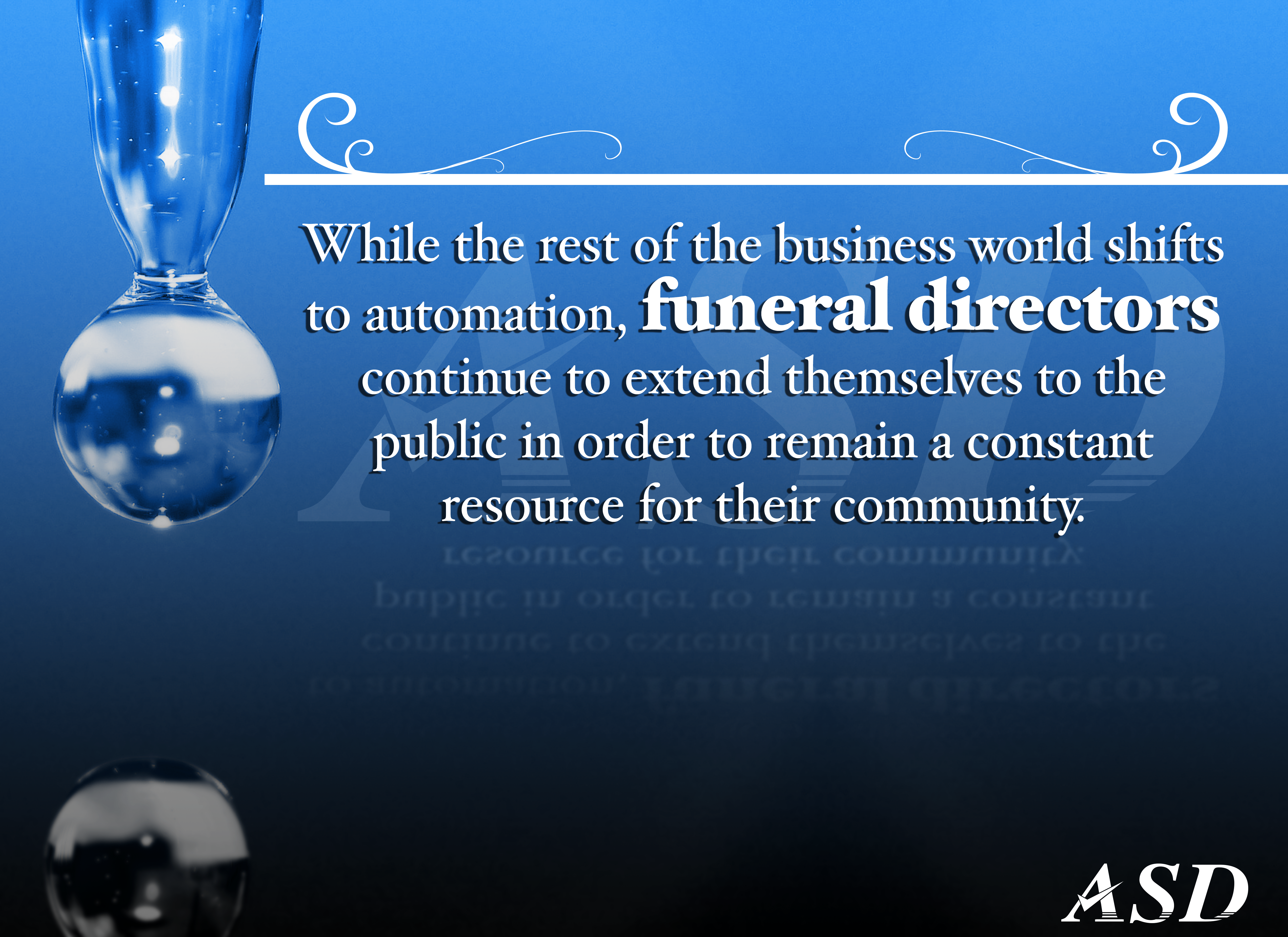 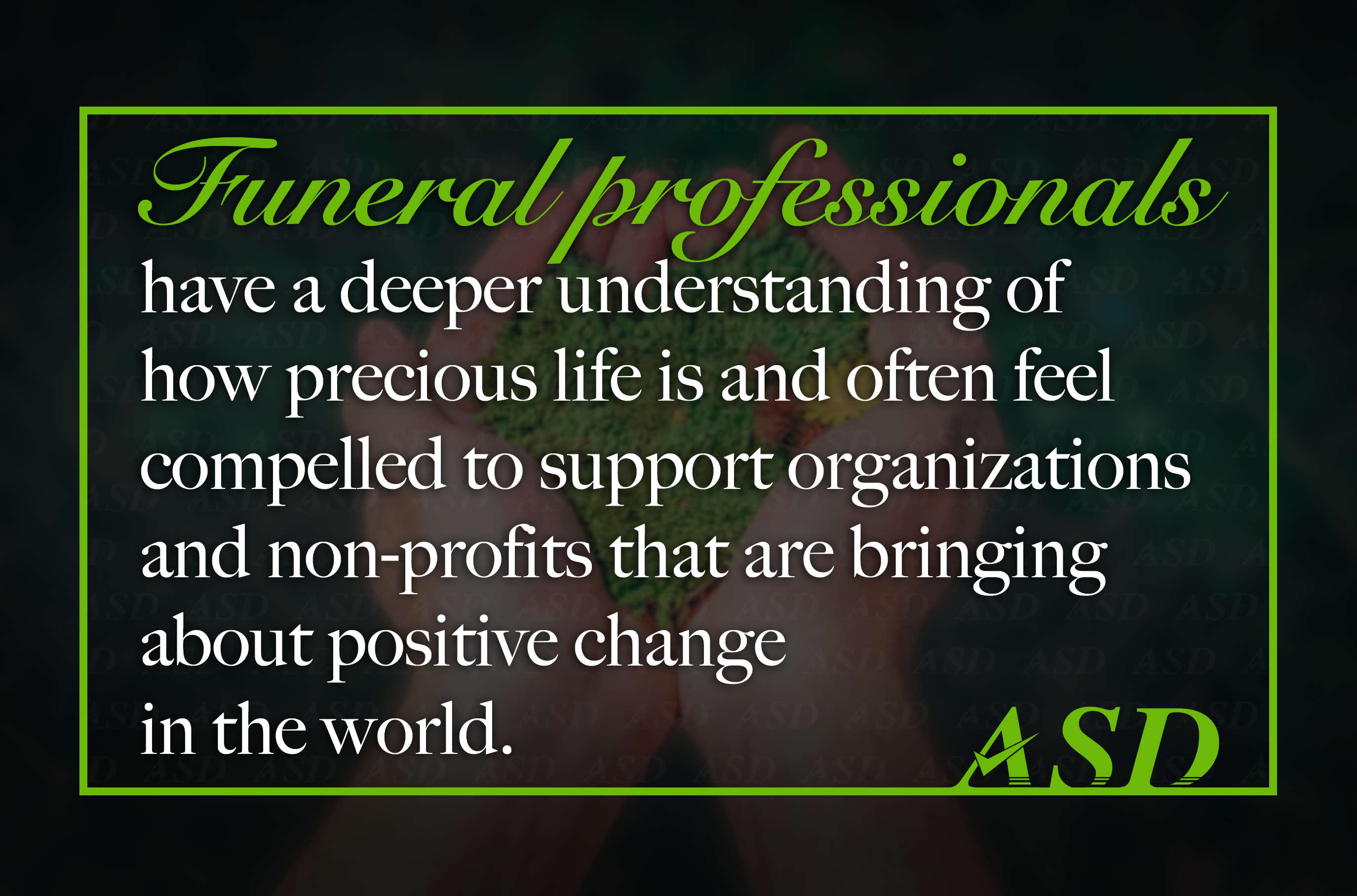 Funeral directors must often bear witness to life’s most tragic stories. They see firsthand what causes great suffering and often feel compelled to make a difference. Funeral directors who have witnessed the impact of substance abuse deaths are often called to help raise awareness about the impact of drug dependence. Funeral homes located in crime-riddled areas have begun holding rallies, parades and other events to try to end the violence in their community. Those that are tasked with handling extremely difficult cases related to suicide or childhood cancer will often devote their support to raising funds and creating awareness. These are just a few examples of the many ways funeral directors become personally invested in important causes as a direct result of their work in death care. 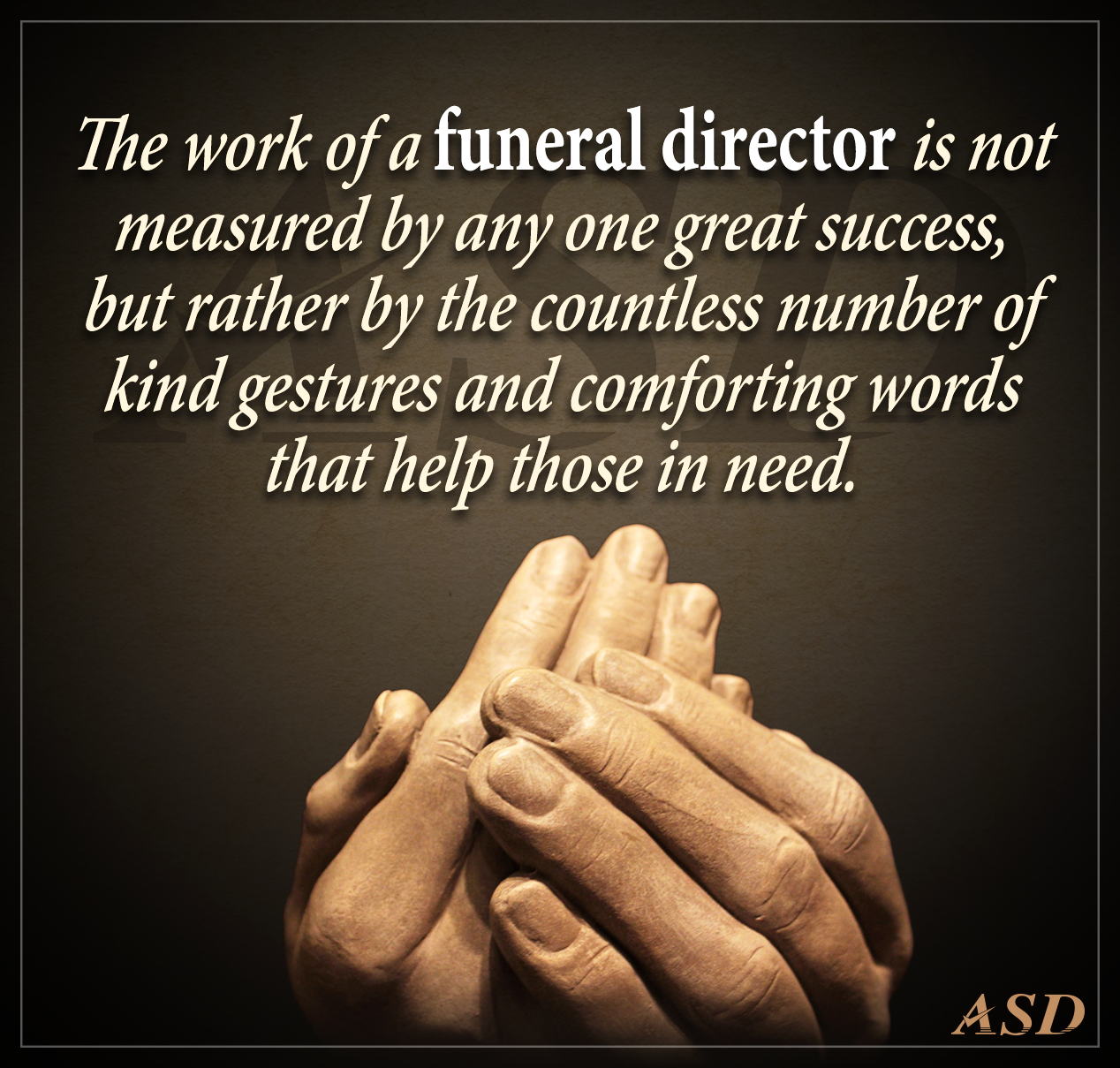 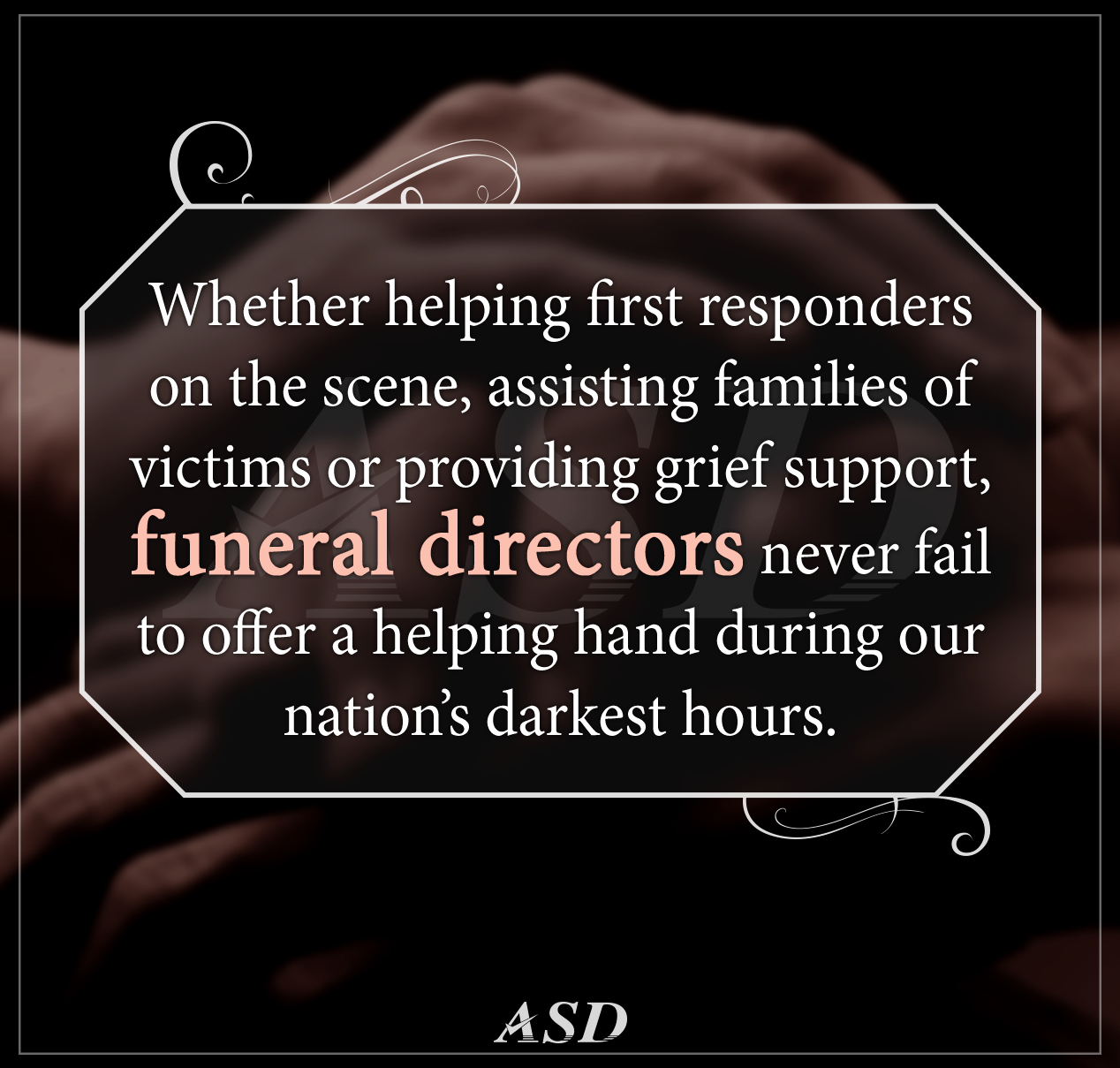 It cannot be overstated how much bravery funeral professionals must possess in order to face some of life's most horrific tragedies. From those tasked with identifying remains at 9/11 to those who volunteered to came to Newtown, CT to assist with burials after the Sandy Hook shooting, these courageous souls are often haunted by what they face but that doesn’t stop them from stepping in to help. 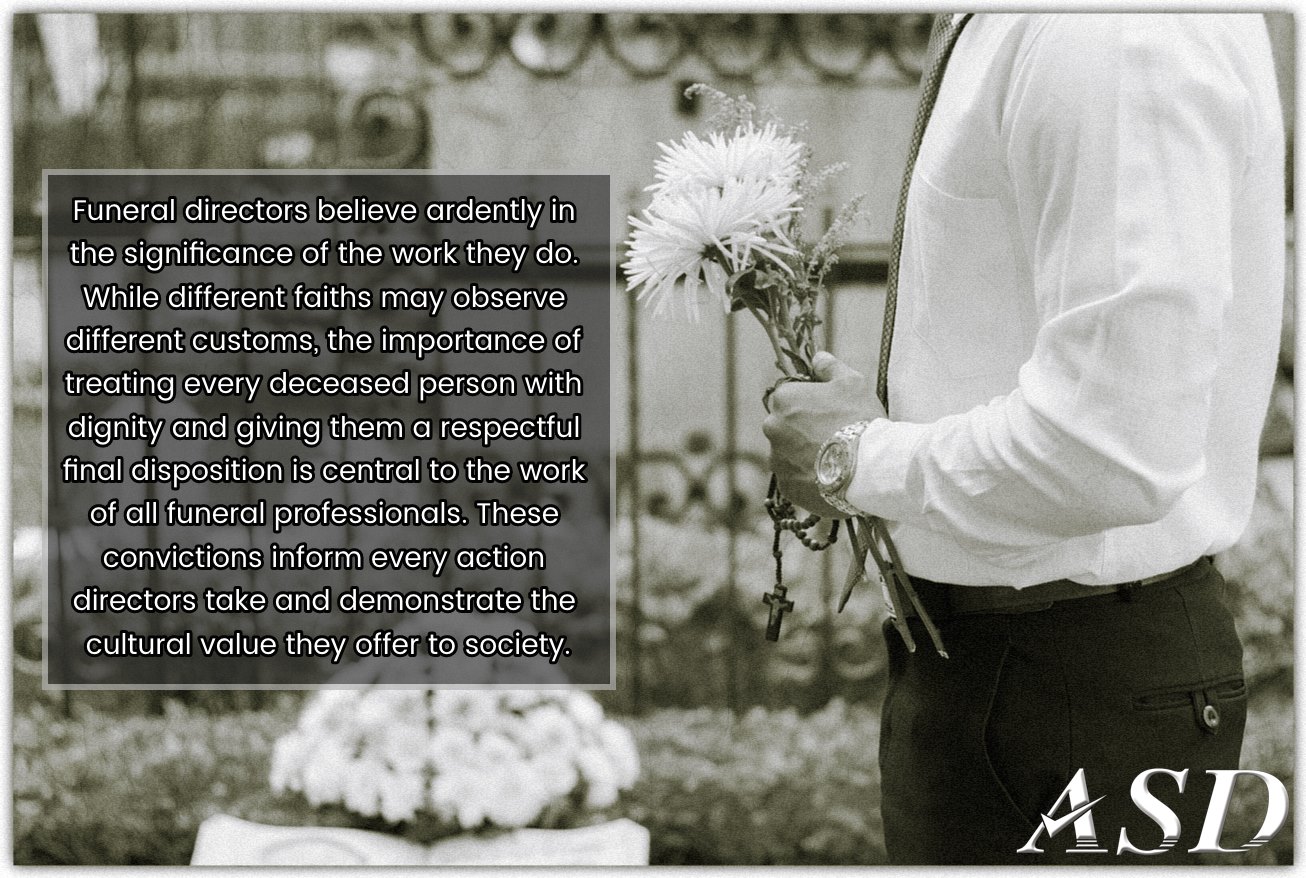 A lot of people have different opinions when it comes to funeral service customs and final disposition options. It is not uncommon funeral directors with vastly different perspectives to debate about these issues because they are so passionate about them. However, when you strip all of that away, the role of the funeral service profession can best be defined with a simple quote by poet and funeral director, Thomas Lynch: "A good funeral gets the dead where they need to go and the living where they need to be." This common goal drives the work of all those who work in the funeral service profession. 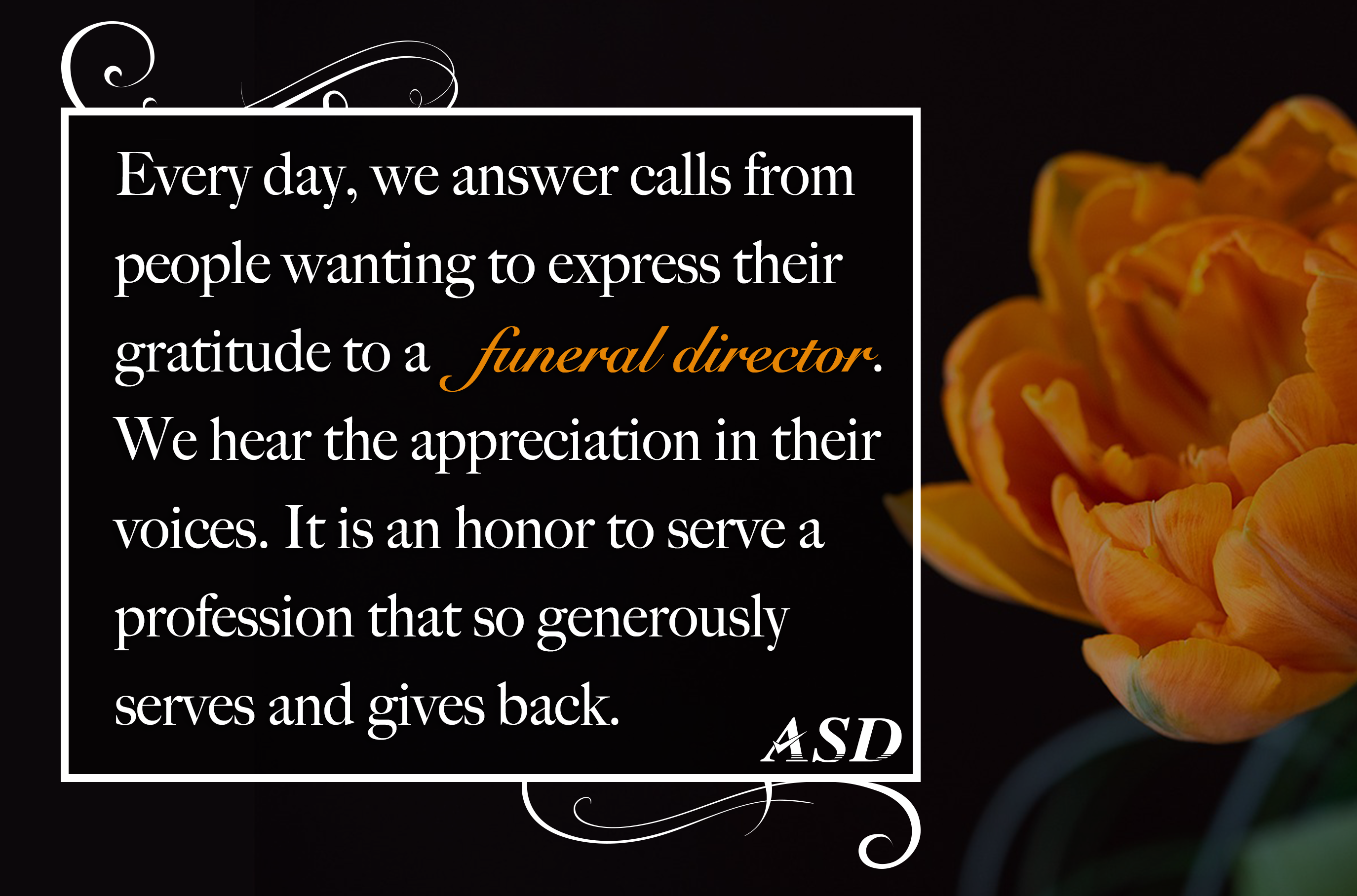 One of the most common calls answered at ASD are from family members that want to express how much they appreciate they way a funeral home director supported them in their time of need. This is a big reason why ASD became funeral exclusive all of those years ago. Funeral directors cared more about their callers and we were moved by their commitment to others. We witnessed firsthand how much funeral directors do for families and how much their efforts help the bereaved. 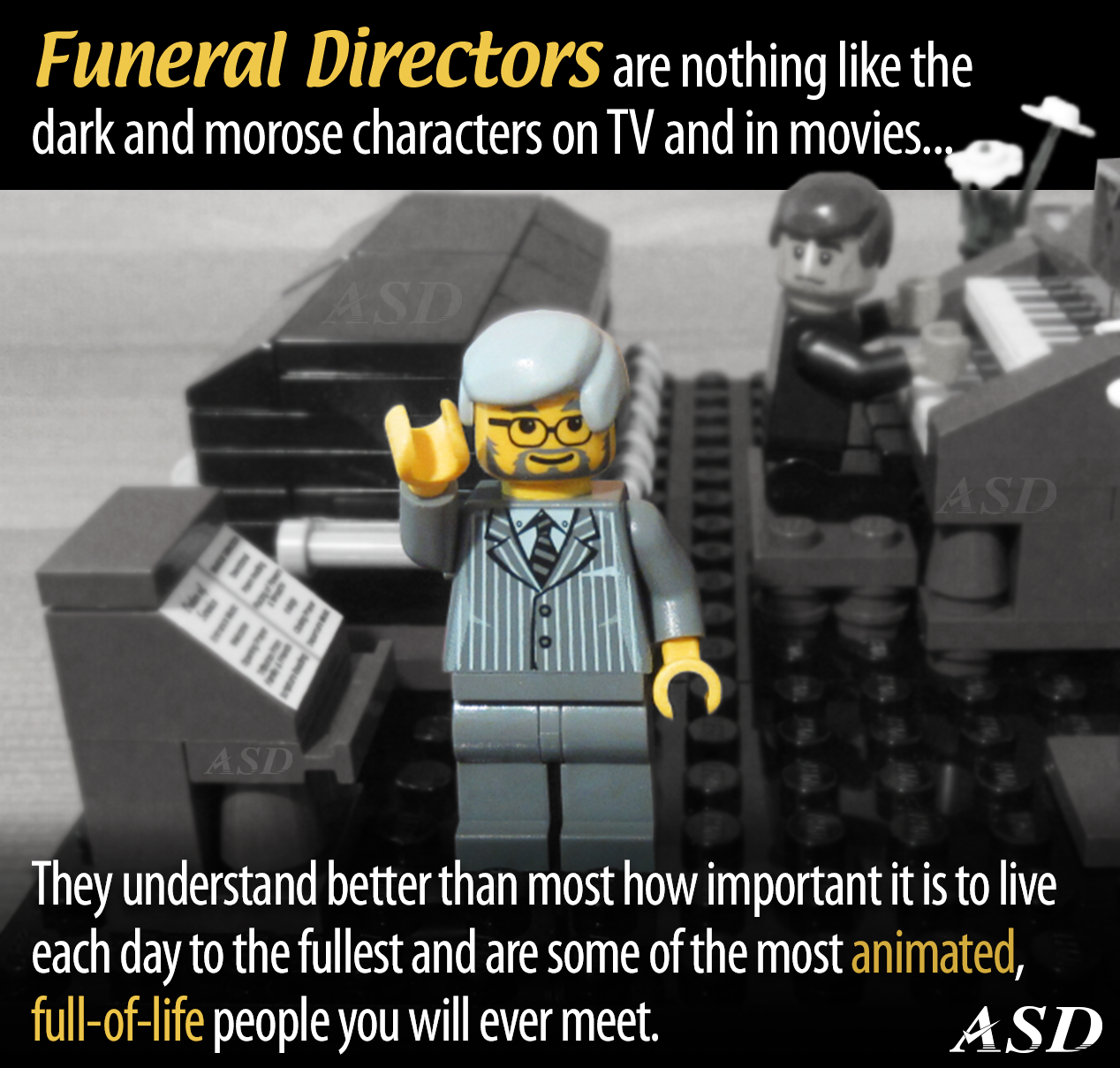 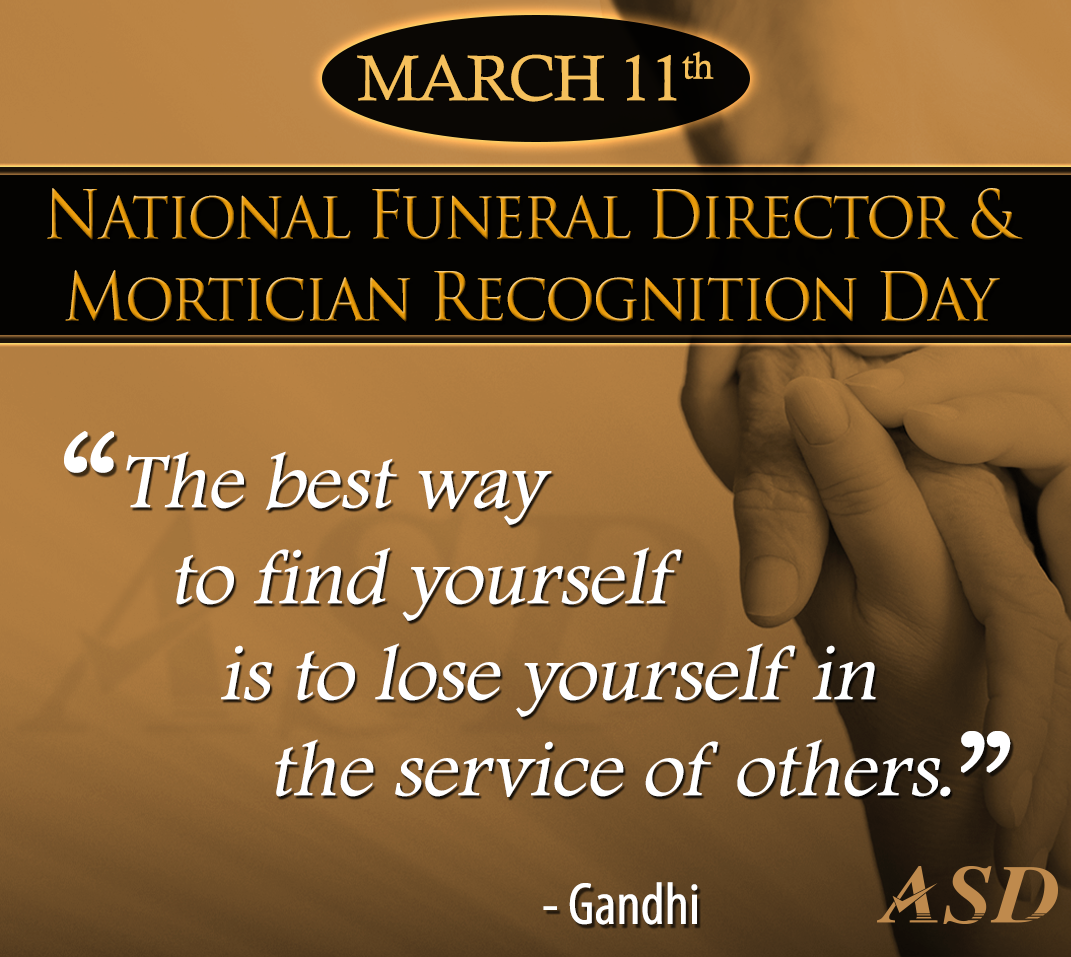