This article was originally published in the The Director Magazine by ASD Staff Writer Jessica Fowler.

A ringing phone at a funeral home cannot be ignored. This one fact has not changed at all over the past 50 years. However, the nature, frequency and value of funeral home phone calls have undergone a major transformation in the past several decades. With the emergence of new technology and a shift in societal expectations, the funeral home telephone has evolved from a simple method of communication into a crucial business tool. Cellular and Internet advancements have essentially created a double-edge sword for funeral professionals, allowing them to communication information through other mediums while also increasing the pressure from the public to remain available 24/7.

Death has never been predictable. However, in the past, funeral directors could expect their telephone conversations to follow a simple trajectory. Twenty years ago, when a family member called a funeral home to report a death, appointments were set up over the phone while arrangements were made and details were finalized in person. Today, that initial phone call is often the only opportunity to create a positive first impression. By understanding and analyzing how funeral home call patterns have shifted, funeral professionals can implement a comprehensive communication strategy to meet the demands of today’s families.

The Impact of Mobile Technology

While the telephone has always been an important business tool for funeral homes, the mobile revolution has had a profound effect on how the public communicates with directors. Smartphone technology allows families to reach funeral homes from anywhere. According to Morgan Stanley, 91% of all U.S. citizens have their mobile device within reach 24/7. This results in a higher call volume for funeral homes and conversations that are less routine. Rather than call from their residence or a medical facility, family members and hospice nurses may report a passing from their car. Casket companies and florists often will not contact the funeral home until they are outside with a delivery.

Mobile technology has not only increased the frequency of calls at funeral homes but also the value of those calls. Families that call with an imminent or immediate need are no longer simply calling to ensure their loved one is taken into the funeral home’s care. They are calling to find out about the funeral home’s chapel, packages and prices before committing. Cellular and Internet technology enable us to do an extensive amount of research and comparison before making a purchase. Consumers can access information about multiple funeral homes online and have more choices than ever. This changing attitude, combined with economic issues, has caused families to become more selective and particular about their chosen funeral home.

With family members often scattered in different areas, it can be difficult for funeral professionals to forge the same lasting relationships with their neighbors they enjoyed in previous decades. According to the Connecting Directors 2012 Funeral Directors Survey, 82.6 percent of respondents have noticed that since becoming a funeral director, consumer attitudes and behaviors have changed. The most common changes listed were cremation, economy/spending less, less loyalty, less religion/tradition and price shopping. The predictable call patterns of the past have eroded largely because the public is more conscious of the different options that exist beyond the funeral home closest to their residence. As a result, that initial conversation is now more critical than ever because the decision has not been made prior to the call.

While the emergence of new technology has certainly created new stress factors for directors, it also has created opportunities. Funeral homes with a strong online presence can reach multiple consumers with a single message. By providing information to the public in a clear, organized format, directors can grow their business while also reducing their call volume. According to a study conducted by BIA/Kelsey, nearly all consumers (97 percent) now use online media when researching products or services in their local area. The public can now locate an obituary online in seconds or use GPS and smartphones to find the funeral home instead of calling for directions. Funeral homes with a detailed website and engaging social media will be able to answer questions and build relationships with families online while eliminating many unnecessary calls.

Creating and maintaining a strong online presence should be a driving force behind any funeral home’s communication strategy. Families will view your firm as more transparent if you provide detailed information on services offered. However, a funeral home website can also have an inverse effect if it is not updated often or contains inaccurate information. For instance, funeral homes that do not list obituaries and florist referrals online can expect to receive more after-hours call. If driving directions on the website are unclear or confusing, it will result in more upset callers contacting the funeral home from their car after they get lost. When designing a website and deciding what content to publish, funeral directors should consider the questions they are asked most often and make every effort to provide clear and detailed answers online.

Directors that are vigilant of their firm’s telephone activity have a major competitive advantage over those who are not. However, many funeral professionals who attempt to answer every call feel burned out or disconnected from their personal lives. With the advent of new technology, the expectation that directors should always be available has escalated to the point where people call after 10 p.m. regarding death certificates. Funeral homes field more calls than ever because there is now a societal need for instant results. The way that we as a culture define what is and is not “urgent” has significantly changed since the introduction of Smartphone technology.

“It's like an arms race…everything is an emergency,” Tanya Schevitz, spokeswoman for Reboot, an organization created to help people minimize their technology use, told NBC News. "We have created an expectation in society that people will respond immediately to everything with no delay.”

The consequences of this trend are multiplied for funeral professionals who handle so many time-sensitive tasks. In addition to the imperative needs of family members, directors must also prioritize their communication with dozens of other businesses including casket companies, florists, cemeteries, donor networks and printing companies, all of which have different schedules that don’t always coincide. The growing focus on immediacy has spread to every industry, making situations that were once commonplace for funeral homes much more imperative. With information at our fingertips 24/7, the expectation of the public has become: I should be able to find my answer immediately. For many funeral directors, this may mean looking up old funeral records in the middle of the night. 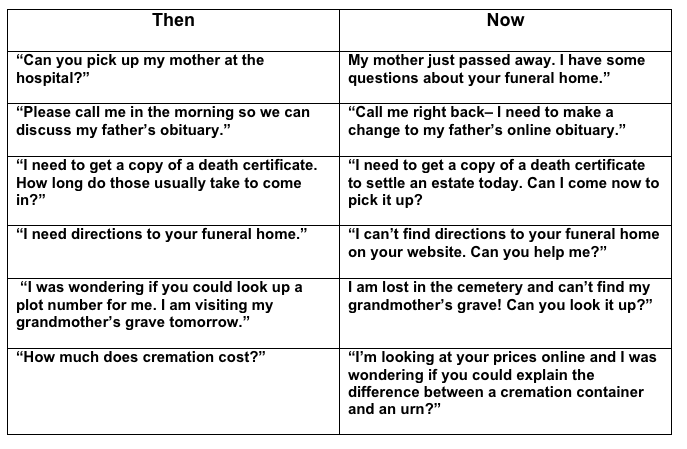 There is no way to create a more negative first impression than to greet families calling a funeral home with a voicemail system, busy signal or perpetually ringing phone. Before call forwarding and call waiting were invented, this was an unavoidable occurrence for all businesses. Today, 80% of people will hang up on a voicemail message (Forbes). To ensure families can always reach a director, funeral professionals must take advantage of the different telephone tools and options that exist to help capture every call. Call forwarding allows funeral homes to divert calls to a secondary phone number, such as a cell or residence phone. However, many directors are not familiar with the different ways this tool can be used.

“Many of the funeral directors we work with first came to us because they couldn’t understand how they were missing so many high-priority calls,” says Kevin Czachor, Vice President and Family Member Owner of ASD – Answering Service for Directors. “In addition to going over ASD’s features and tools, we explain how call forwarding can be used 24/7 to protect calls that aren’t answered in time at the funeral home or calls that come in during a power outage. These are features that almost every funeral home has access to through their local phone company, but they aren’t aware of it.”

In addition to using call forwarding when away from the funeral home, directors can program this feature so it backs up the main funeral home phone line 24/7. This means that if no one can get to the phone in time, or if the lines are down due to a power outage, the call will then forward to a back up number.

Ten years after Alexander Graham Bell made the world’s first phone call, it was an undertaker who brought the telephone to the next stage of evolution. Funeral Director, Almon Strowger, discovered that his competitor’s wife, who worked as a telephone operator, was redirecting his calls and costing him business. Strowger worked to create a solution to this issue, resulting in the first automatic telephone and the second greatest landmark in the history of telecommunications. Even in 1888, Strowger recognized the importance safeguarding his funeral home’s telephone calls.

Today, funeral homes don’t have to reinvent the telephone to capture critical calls, but they must create a communication strategy that meets their personal needs as well as the needs of families. Directors can greatly reduce the risk of a lost call by examining their funeral home’s call patterns, utilizing call forwarding features and using online mediums to communicate information. While it may not be possible to know what a call is concerning from the sound of ringing phone, funeral professionals can take steps in advance to ensure the person on the other line will always receive a prompt and professional answer.