ASD Mobile Turns 5: A Timeline of Our App’s History 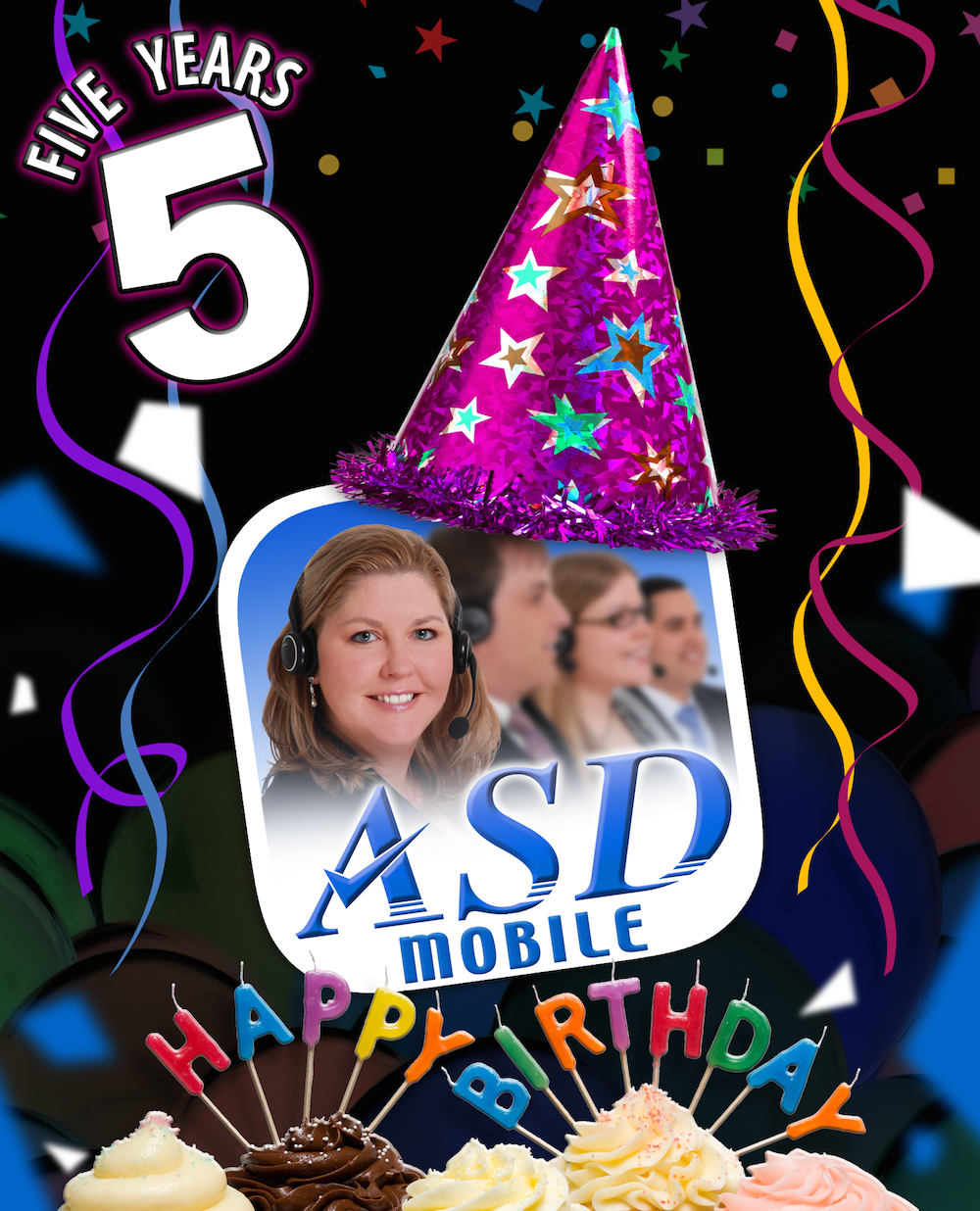 Today marks the 5th anniversary of when ASD released the first version of ASD Mobile to the Apple App Store. It is hard to believe that only five years ago, funeral directors were given the freedom for the first time to take their mobile communications on the go. ASD Mobile provides directors with a constant and reliable link back to the office, allowing funeral professionals to manage their telephone communication and conduct business from anywhere. Since it was first introduced on December 12, 2011, ASD Mobile has been downloaded more than 6,000 times and has received over 100 5-star reviews – far exceeding any other mobile app created for the funeral profession.

Over the past five years, our app has been updated numerous times to provide more features and tools to help improve the lives of funeral professionals. To celebrate ASD Mobile’s birthday, we thought it would be fun to take look back at our app’s history. Here is a timeline for the evolution of ASD Mobile:

A select group of ASD clients volunteer to beta test our company’s new mobile app and provide feedback on their experience. The suggestions received from these directors helped ASD’s Technology Team to create a user-friendly and intuitive interface.

ASD demos an early beta version of ASD Mobile at the 2011 NFDA Convention. 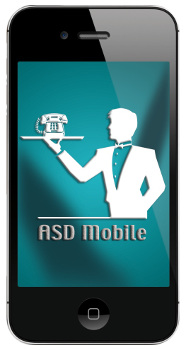 December 12, 2011: The first version of ASD Mobile is introduced.

December 15, 2011: ASD Mobile receives the first of many 5-star reviews on iTunes. 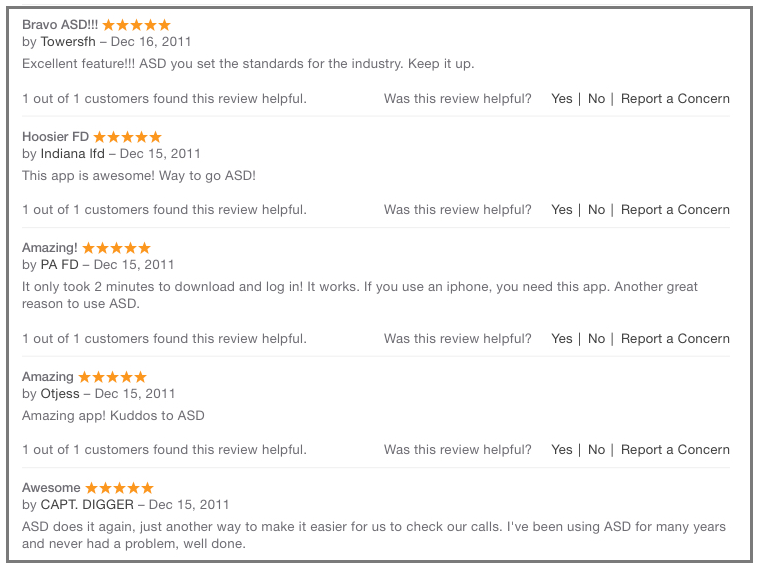 The addition of Push Notifications allowed directors to control how, when and why they are contacted for messages. For the first time, clients could respond to their messages from ASD with just a quick tap on their phone, saving time and eliminating unnecessary phone calls. With ASD Mobile 2, directors could also manage their own individual contacting preferences, set up specific notification schedules and choose from a selection of sound alerts.

In July 2012, ASD received word from the NFDA that a distinguished panel of judges had selected ASD Mobile as one of five finalists for the Innovation Award. An online voting site is set up for funeral professionals to cast their vote for the winner of the award.

Funeral directors who expressed an interest in an Android version of our app were given exclusive access to test out and provide feedback on ASD Mobile for Android. Our technical team discovered that creating an Android app was much more complicated due to the sheer number of different devices that exist on Android platform and problems caused by fragmentation. We relied upon our beta testing group to help us evaluate and troubleshoot the earliest versions of ASD Mobile for Android. Their assistance and patience made it possible for us to create the best version of our app for the Android platform.

ASD was honored and humbled to be named the recipient of the 2012 NFDA Innovation Award. The award represents the pinnacle of achievement for a funeral service vendor. Everyone on the ASD team felt extremely grateful to the NFDA judging panel and to the funeral service community for recognizing the value our mobile app delivers to directors. 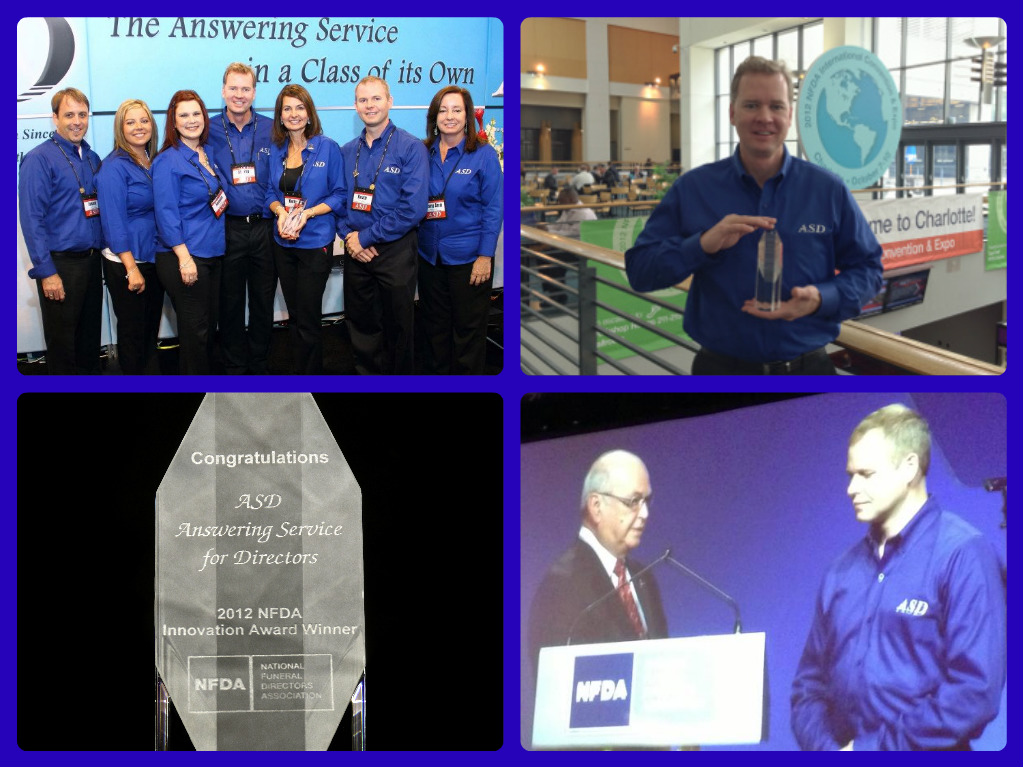 Winning the 2012 NFDA Innovation Award was one of the proudest moments in ASD’s company history.

By the end of October 2012, the ASD Mobile app had been downloaded more than 3,000 times and had received more than 40 five-star reviews. This increase was brought on both by ASD winning the NFDA Innovation Award and the large number of funeral professionals who heavily relied upon our service during Hurricane Sandy.

After gathering feedback from more than 200 beta testers, ASD was able to enhance the app’s performance and ensure it was fully functional on all Android devices. ASD Mobile for Android delivered all of the features iPhone users appreciated about the app, giving Android users one-touch access to hear and read all aspects of their messages, utilize push notification technology, update service information, change on-call details, and provide feedback in seconds.

With the help of our clients, ASD was able to build an Android version of our app in less than a year.

Throughout 2013, ASD’s Technical team was busy at work creating new features and options within both versions of ASD Mobile. After launching the Android app, our tech team wanted to implement many of the great ideas suggested by our app beta testers. Throughout the year, many new solutions were added, including:

To thank all of the directors who helped us to win the 2012 NFDA Innovation Award, ASD held a client cocktail party during the 2013 NFDA Convention in Austin. It was a wonderful evening with our clients and a great way for us to show how much we truly appreciated everyone who voted for us and helped us spread the world about the benefits of our app to the funeral service community. 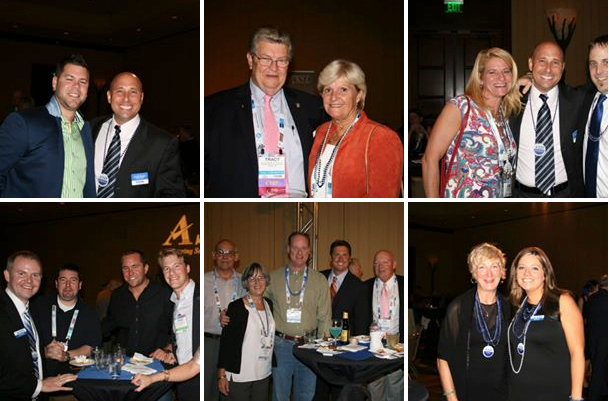 A few of the photos taken during the Innovation Appreciation Celebration. Click here to see the full album.

ASD created our first Video Demo highlighting all of the benefits of using the ASD Mobile app.

With the introduction of the iPhone 6, ASD began beta testing an updated version of ASD Mobile for iPhone to introduce a redesigned look and several new game-changing features.

During the 2014 NFDA Convention in Nashville, ASD Mobile 3 was released to the iTunes store. The updated version introduced a fresh new look and slide out menu that allowed directors to maneuver through the app quickly. The update also introduced many new tools, including a home page summarizing account activity, a new First Call form section, the ability to easily block any number via SolicitorShield™, Web Chat integration and much more. 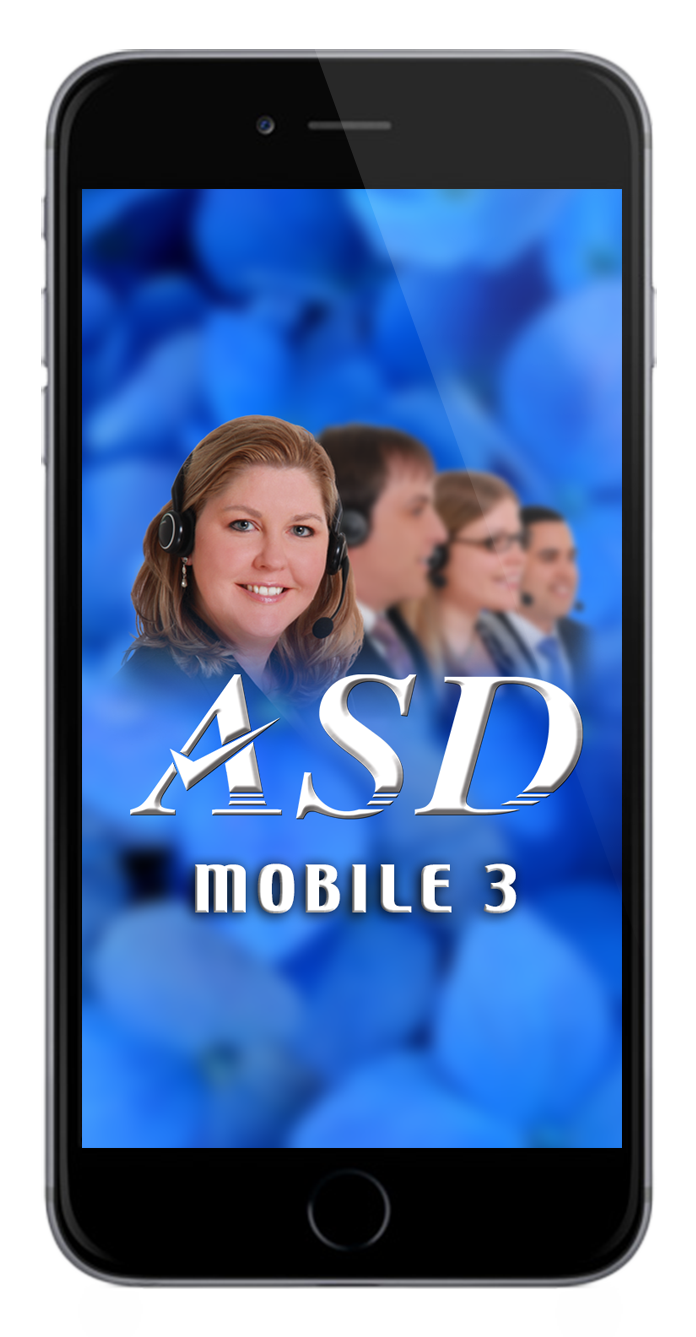 With the release of ASD Mobile 3 came one of ASD’s most advanced and revolutionary features. MobileFH® gives funeral directors the ability to call any number from their cell phone and display the funeral home’s office phone number as their outgoing Caller ID. This ensures that funeral directors can keep their personal cell numbers private, families always have the correct number to call back, and directors do not have to worry about answering business calls when they are off duty. Calls placed using MobileFH® are also recorded, giving funeral home owners a chance to use these call recordings as training tools for their staff. 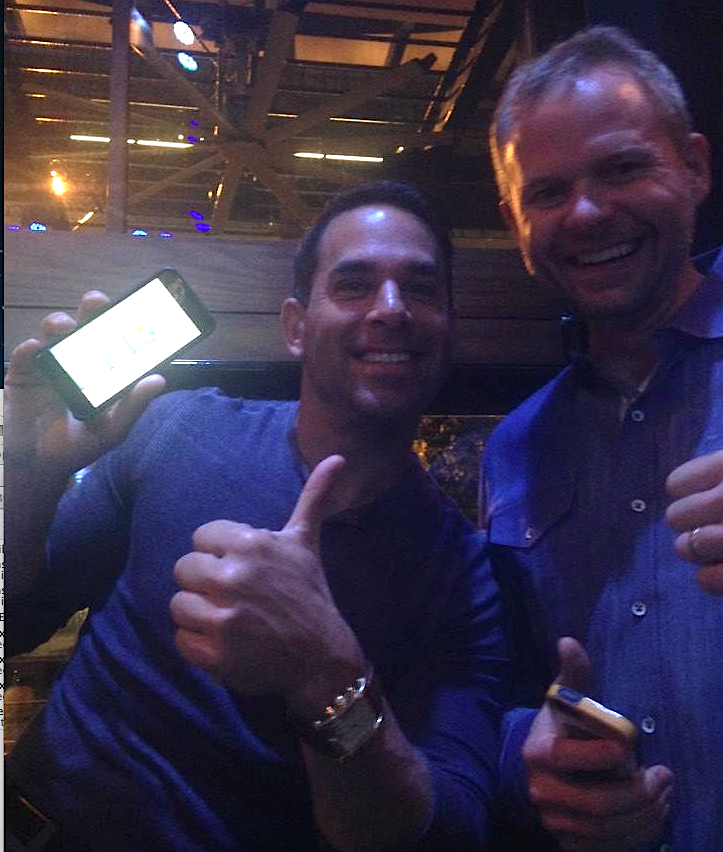 During the 2014 NFDA Convention, Matt Fiorilla of Ballard-Durand Funeral Home became the first ASD client to use MobileFH®.

ASD created an updated ASD Mobile tutorial video to demonstrate all of the new features and options available through the new, enhanced version of the app.

To help funeral directors understand the benefits and convenience of using MobileFH® to keep their cell phone number private, ASD created a tutorial video explaining how this unique solution works.

On Monday, October 19, ASD – Answering Service for Directors was named the winner of the National Funeral Directors Association’s 2015 Innovation Award, making ASD the only company to receive this prestigious award twice. ASD Family-Member Owner, Kevin Czachor, was on stage to accept the award from NFDA Past President, Robert Moore, at the Opening General Session of the NFDA’s International Convention & Expo:

“We are honored and humbled by this recognition from the NFDA and by the many funeral professionals who took the time to vote for our MobileFH® feature,” said ASD Family-Member Owner, Kevin Czachor, after accepting the award. “It truly is an incredible honor and we would like to dedicate it to all of the hardworking funeral directors who spend so much time on-call. Knowing that we have built a solution that makes life easier for our clients is the greatest award we could receive.” 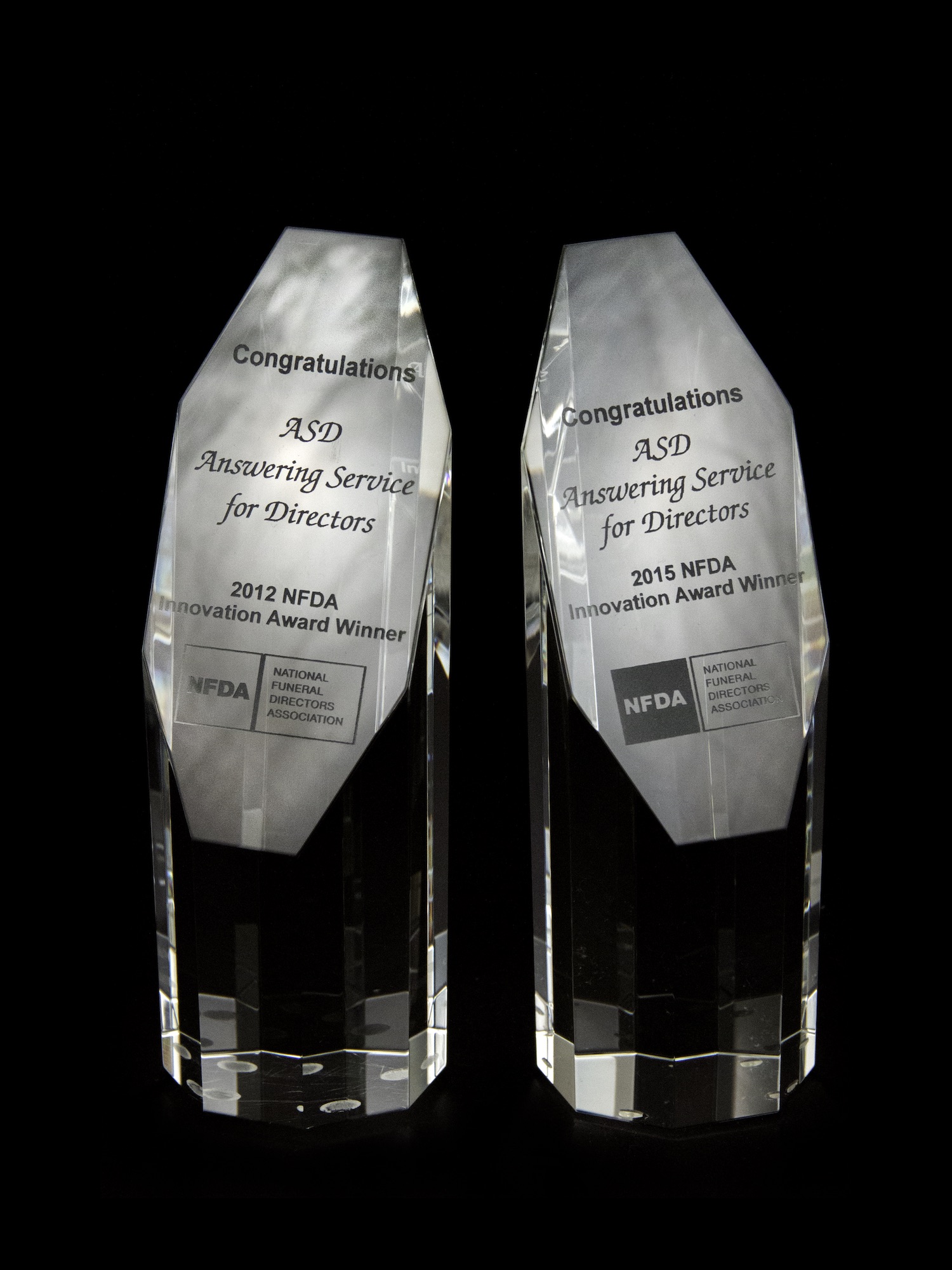 ASD is honored to be the only funeral service company to receive the NFDA Innovation Award twice.

ASD’s Technical Team enhanced the Archive section of ASD Mobile for iPhone to include a search tool to help directors find old messages, call recordings and dispatch logs. Clients can also narrow their search to specific types of calls, such as preneed or price shopper calls, to easily keep track of their most important messages and follow up when necessary. The updated Deep Archive now stores messages for a much greater length of time, allowing directors to access messages up to 5 years old. These new features will also be added to ASD Mobile for Android in the coming months. 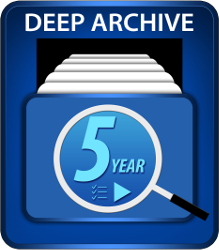 ASD hosted our second Innovation Appreciation Celebration to once again thank our clients for helping us take home the NFDA Innovation Award. With the 2016 NFDA Convention right in our back yard in Philadelphia, we were able to treat our clients to a fun and relaxing night above the city on the 52nd floor of the Pyramid Club. More than 400 funeral directors were treated to unparalleled views of the city at sunset, flavorful cocktails (including our signature “ASD Blue Mortini”) and delicious food. So much of ASD's interaction with directors is over the phone, so events like this are very special to us because they give us a chance to really get to know our clients and their families. 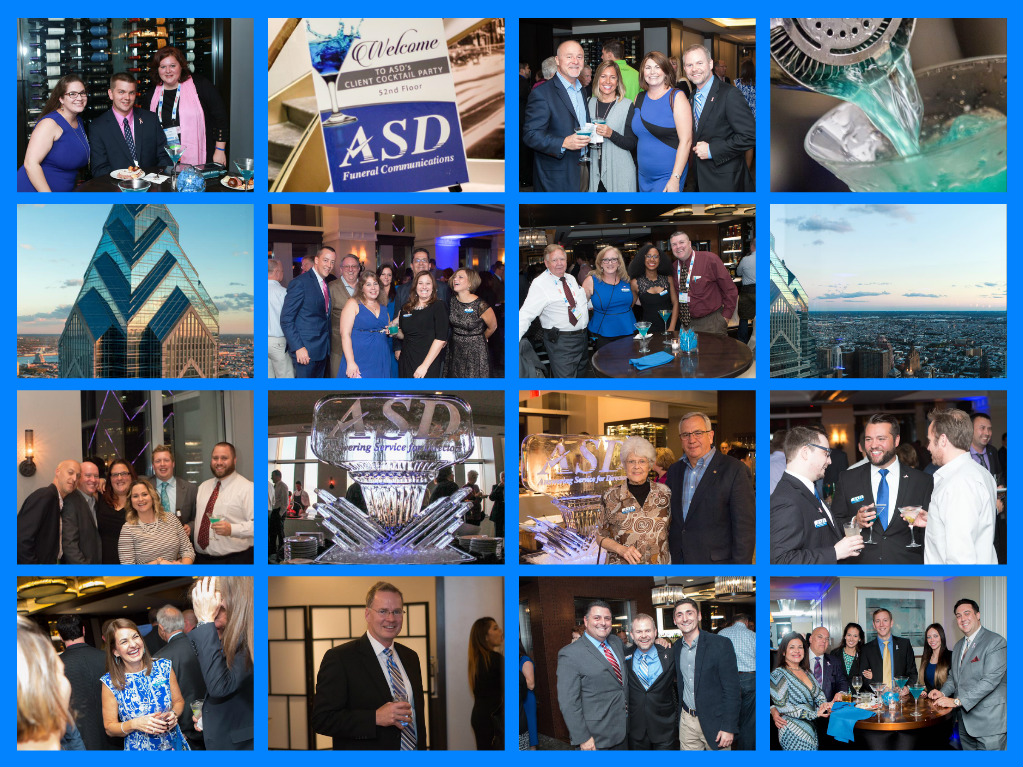 A few of the photos taken during the Innovation Appreciation Celebration. Click here to see the full album.

The next stage in our evolution of the ASD Mobile app is the release of our newly enhanced Android app. Our Technical Team has been busy working on this for several months and will be releasing a beta test version very soon. The new version will incorporate both the design and new features of ASD Mobile 3. Keep an eye out for more announcements on the horizon relating to our Android app.

Here at ASD, we are proud to offer technology to funeral professionals that delivers freedom and convenience to their lives. Be on the lookout for more mobile solutions from ASD in the future as we continue working on ways to enhance your experience using our service.