The survey received more than 660 responses. Participants were asked to provide feedback on their funeral homes’ use of mobile technology and call forwarding. The survey also included questions about monthly expenditures, telephone patterns and interoffice communication. In an effort to construct a thorough analysis of the communication behaviors of funeral professionals, ASD polled both its current client base as well as funeral professionals who do not use the company’s services. 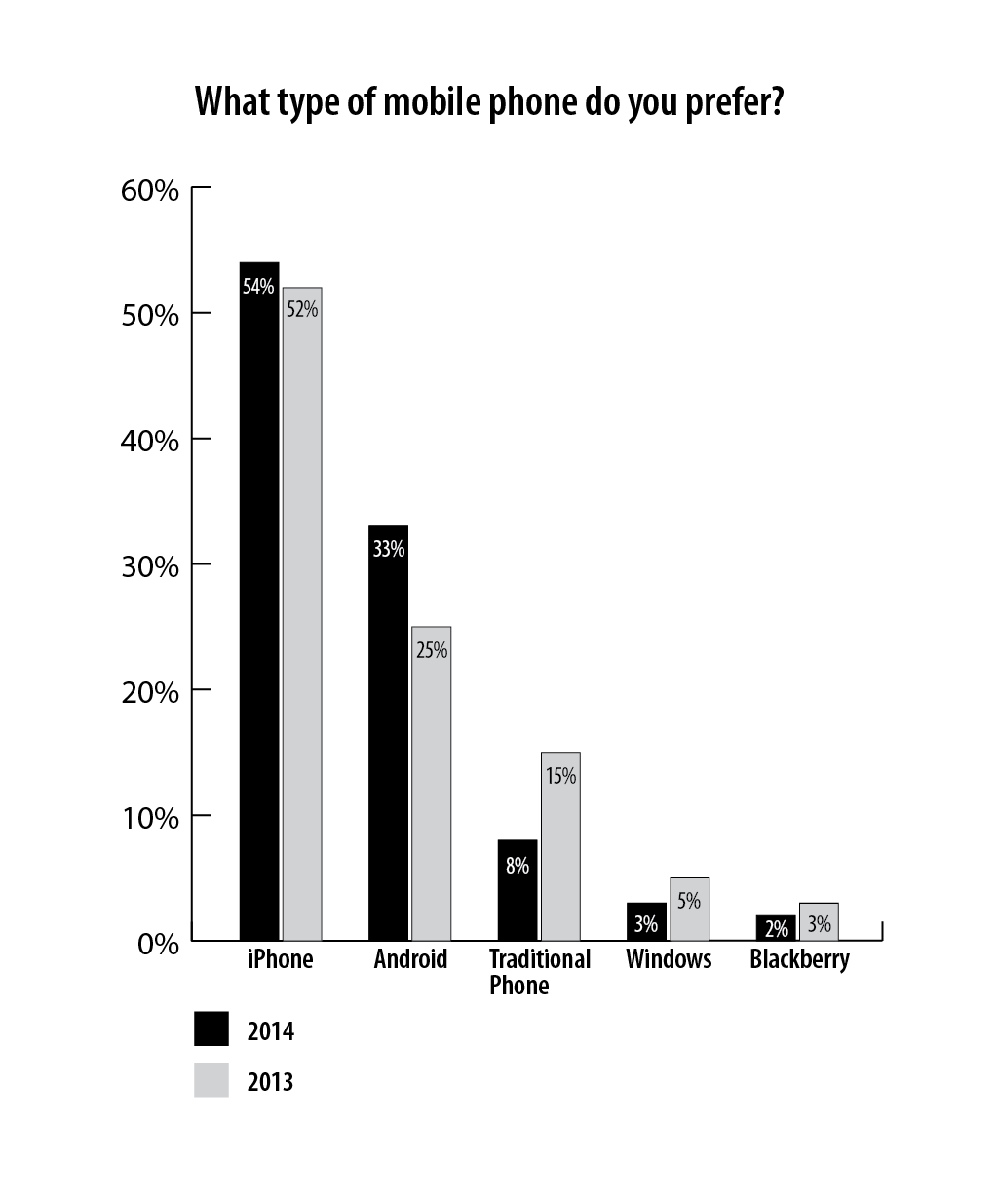 ASD asked funeral professionals which smartphones they prefer and which apps help their firms conduct business.

Slightly more than half (53 percent) of the funeral professionals surveyed are currently using an iPhone. This number is consistent with last year’s results. However, the Android platform saw a healthy increase with 33 percent of respondents using Android phones in 2014 versus only 25 percent in 2013. This is likely a result of funeral professionals switching from traditional, flip or bar style phones to smartphones. Only 8 percent still use traditional phones in 2014 compared to 15 percent in 2013. The number of both Windows and Blackberry users also declined to 3 percent and 2 percent respectively. The mobile nature of funeral service work is driving more funeral professionals toward communication devices with higher functionality.

Slightly more survey participants are using mobile apps to help run their businesses today than one year ago. Of the 660 surveyed, 17 percent are using a variety of smartphone apps to conduct business, up 2 percent since last year. About 59 percent say they use only the ASD Mobile app to manage communications and business matters. Nearly one quarter (24 percent) are not using any app for their business needs.

Even though the vast majority of those surveyed use mobile phones that are compatible with business applications, most chose not to explore these apps. ASD surmises this may be due to reluctance to provide private information and lack of time. Many business apps are synced with other office functions, requiring directors to provide personal data in order to use them. 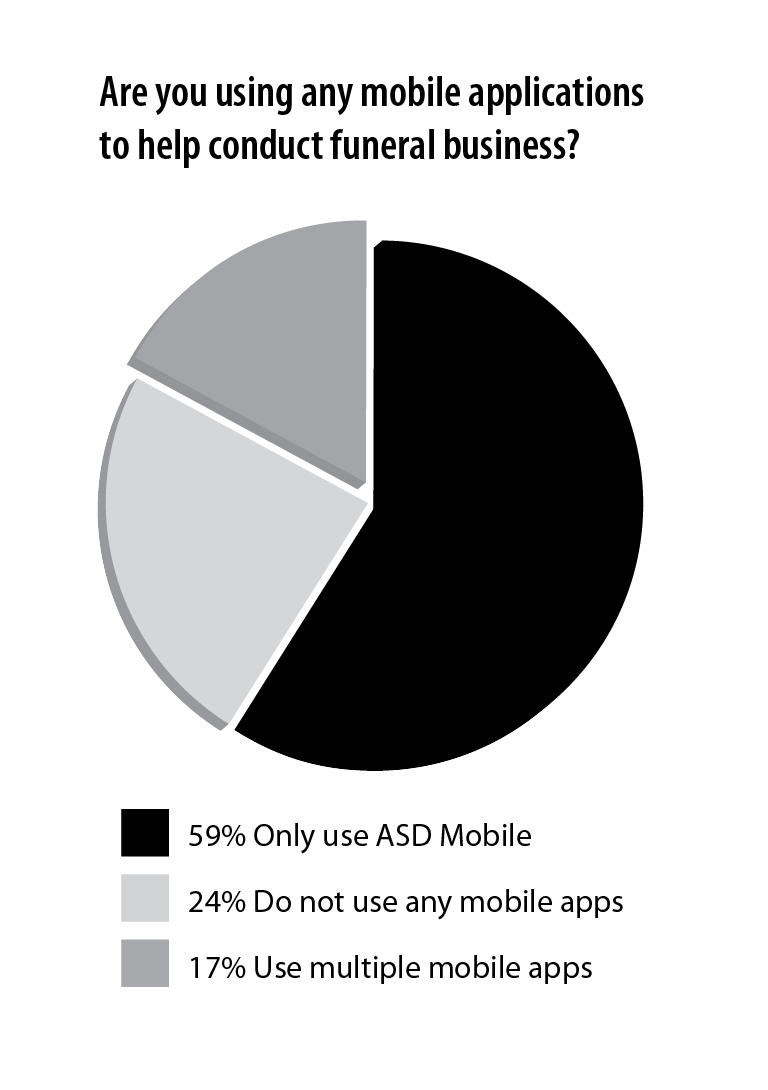 Additionally, while business apps are designed to streamline business tasks, some view them as too time-consuming to set up or learn.

Survey participants who use mobile apps to conduct business were asked which apps (other than ASD Mobile) they find the most helpful. Here are the most popular choices:

Remote Access Apps: For the second year, respondents selected remote access as the type of business app used most often to conduct business. These applications allow users to access their computers remotely from any location with a mobile device. Since directors are frequently in transit, these apps are especially useful. They can be used to update documents, access databases or organize folders while on the go.

Social media apps: Funeral professionals are more focused on their funeral homes’ social media channels now than in 2013. Last year, only one respondent named a social media app as a tool used regularly for business. This year, Facebook, Twitter and LinkedIn were the three most commonly used social apps. These mobile apps allow funeral professionals to conveniently update all of their social sites with little effort. New services that enable users to cross-post content on multiple platforms have further simplified the process.

Banking apps: More funeral professionals have taken their finances on the go in 2014. Banking and finance related apps were the third most popular selection of survey respondents. Banking apps can be used for simple functions such as checking an outstanding balance or transferring funds between accounts. They can also help streamline more complex tasks with mobile check deposit, phone-to-phone payment options and billing alerts.

Surveillance apps: Surveillance apps are mobile phone software apps that sync to the funeral home’s closed-circuit television cameras, Internet protocol cameras and/or alarm systems. Directors use these apps to remotely monitor live video from the funeral home offices and receive real-time alerts of any activity in the building. They can also be used to monitor heating and cooling systems or bypassing alarm zones.

ASD asked funeral professionals how and when their funeral homes use call forwarding.

ASD asked funeral professionals how often they forward to their current answering services. The majority of respondents forward their lines during the evening (34 percent) and at different times throughout the day (26 percent). Slightly less than 17 percent do not use an 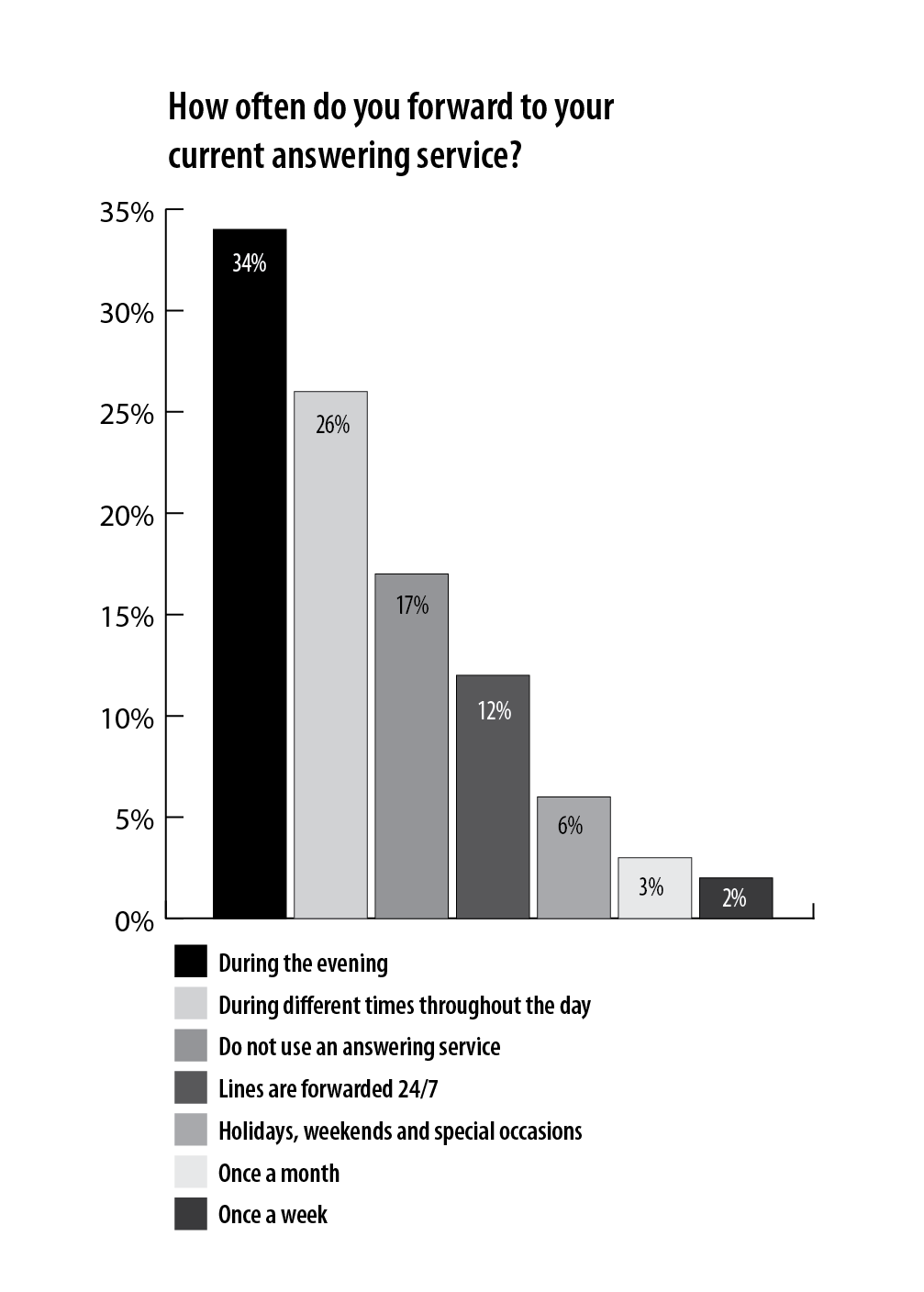 answering service while another 12 percent keep their phone lines forwarded to a service 24/7. Firms that forward to an answering service on a sporadic basis are less common with only 6 percent of respondents diverting calls on holidays, weekends and special occasions. About 3 percent forward once a month and 2 percent forward once a week. These findings are consistent with ASD’s internal statistics that found the busiest spike in calls occurs at 5:00 p.m. on weeknights when most funeral directors are checking out for the evening.

ASD asked funeral professionals if they are using no-answer call forwarding to protect their firms’ calls.

Note: “No-answer call forwarding” is a feature available through the phone company that forwards phone lines automatically if they are not answered in the office by a predetermined number of rings.

The majority (53 percent) of funeral professionals surveyed currently use No-Answer Call Forwarding, a 3 percent increase since last year, while 34 percent opt not to use this tool. About 10 percent were unaware this option existed. Only 3 percent answered that this feature was not available in their area, a percentage ASD predicts will decline over the next four years. The vast majority of phone companies do offer this, but there remain a few remote regions of the country where this option is unavailable. Eventually, technology will catch up and no-answer call forwarding will be accessible to funeral homes nationwide.

It is surprising to find such a large percentage of funeral professionals paying so much for their landlines, considering the fact that most phone companies offer solutions and bundles specifically for small businesses. It’s possible some survey participants may have factored in their Internet costs when answering this question. Additionally, some areas have experienced sharp rate increases due to telephone companies raising prices. In California, for instance, landline costs have skyrocketed due to deregulation of the state’s telephone market. Funeral homes affected by these inflated costs can seek alternatives for their landline phones such as a VOIP system.

Monthly cellular costs for the funeral professionals surveyed ranged from less than $50 to more than $250. The survey found that 17 percent of respondents pay less than $50. More than half (52 percent) answered that their monthly cellular bills cost between $50 and $100 each month. About 18 percent pay between $100 and $150, 7 percent pay between $150 and $200 and slightly less than 6 percent pay more than $250. The data indicate that funeral home cellular costs are consistent with the national average. According to J.D. Power & Associations, the average individual cell phone bill is $71 per month. Despite the fact that funeral professionals must often conduct business on mobile devices, cell phone companies offer low-rate, unlimited plans that meet the needs and budgets of funeral professionals.

Monthly costs for the funeral homes’ fax machines ranged from less than $20 to more than $60. Most firms (49 percent) pay less than $20 for their fax machine operating costs including phone line and toner costs. About 14 percent pay $30 each month, 11 percent pay $50 and 6 percent pay $60. A surprising 15 percent pay more than $60 each month. This percentage is likely higher because a funeral home with high-volume faxing may need a fax-only phone line, effectively doubling costs. Slightly less than 5 percent of those surveyed do not use fax machines at all and most likely send faxes via computer, email or mobile app. 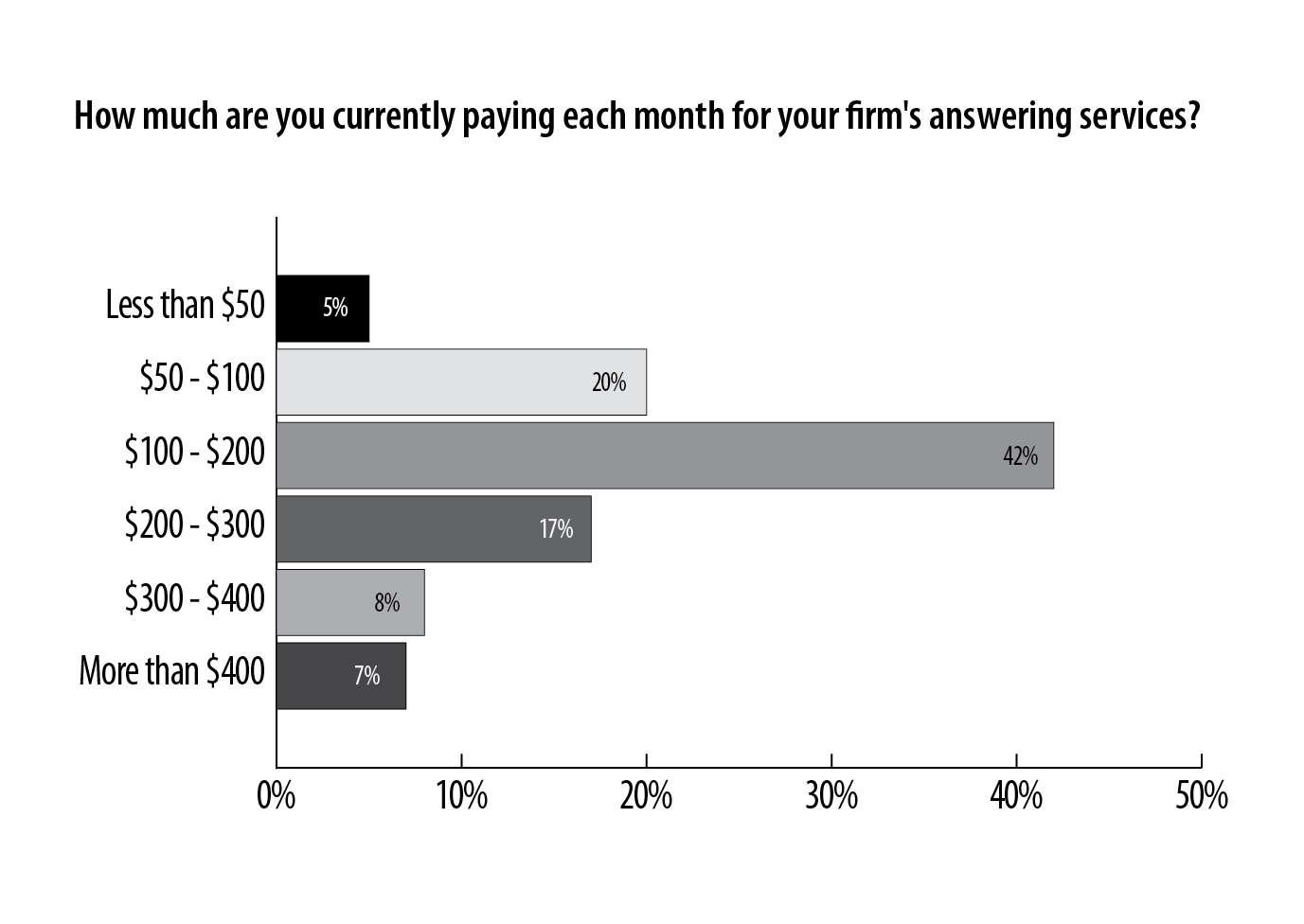 Monthly costs for the funeral homes’ website ranged from less than $50 to more than $150. The survey found that 21 percent of respondents pay less than $50. The highest percentage of funeral homes (33 percent) pay between $50 and $100 for their firm’s websites. Slightly less than 13 percent pay between $100 and $150 and only 11 percent pay more than $150. About 19 percent answered that they have a free website while 3 percent answered that they do not have a website at all. These figures are a reflection of the competitive pricing offered from funeral home website providers. Funeral homes can now create an attractive and well-designed site for little or no cost by offering funeral merchandise online.

ASD asked funeral directors to list the top five reasons most people call their funeral homes other than to report a death.

ASD asked funeral directors how much time they spend in their offices when not conducting a service.

ASD asked funeral professionals if they used funeral management software and if so, when they last updated.

The survey found that 73 percent of respondents use funeral management software for their businesses. Of those, approximately one-third have updated their software very recently, 14 percent updated last year, 12 percent updated within the past 2 years and 16 percent answered that it had been a long time since they updated their software. While respondents were mostly split on how often they upgrade to the latest software, the large majority of firms prefer using management systems rather than manually storing and organizing their firms’ death records.

ASD asked funeral professionals what percentage of their phone calls were from price shoppers.

Are you surprised by any of the findings of ASD's Communications? Leave us a comment - we'd love to hear your opinions about our survey results!