If you haven’t had a chance to listen to our FuneralProChat podcast with Kevin Moran on Hurricane Sandy and Charity in the Funeral home, a portion of the interview was recently published in American Funeral Director. As a funeral director located in Staten Island, NY, Kevin Moran was on the front lines after Hurricane Sandy struck. The John Vincent Scalia Home for Funerals was instrumental in aiding those affected, providing burials at no cost for those killed by the tragedy and offering housing and food to victims and volunteers for months. Read below to learn about Kevin's experience and how this terrible event brought funeral directors, vendors and other funeral professionals together in an effort to help those less fortunate.

Funeral Pro Chat is a new podcast series where funeral professionals discuss funeral trends, news and customs. The goal of Funeral Pro Chat is to inform and enlighten funeral professionals on a range of subjects that interest them. American Funeral Director will periodically provide edited excerpts from the podcasts to spur the discussion on topical issues affecting the industry.

Funeral service, it's not a job, it's a calling.

Nancy Burban and Jessica Fowler, Public Relations Specialist and Staff Writer for ASD, chat with Kevin Moran about philanthropy in the funeral home and the role of a funeral home after a natural disaster.

Nancy Burban: Jessica Fowler and I are chatting with Funeral Director and Educator, Kevin G. Moran, to discuss charity and giving back to the community. The theme is charity begins at home; the funeral home. I can't think of a funeral home that has a stronger feeling of philanthropy than The John Vincent Scalia Home for Funerals on Staten Island, in New York City. Kevin, you've worked at American Academy McAllister Institute for over 15 years as an Educastor and you're an instrumental part of the funeral home, but tell us just a little bit about yourself so our listeners can get a feel about who you are.

Kevin Moran: Sure, first of all thank you for having me. I started in the funeral business working as a door attendant when I was in college and I was very enthralled by it all. I finished college, earned a degree in business and started my career in funeral service. Shortly after, I met my wife at McAllister. I worked in Queens for several years and commuted back and forth from Staten Island. Then, my father-in-law asked me to come on board since I was already working for him part time. That was in 1988 and I’ve been there since. It’s a family-run funeral home with my wife, brother-in-law, father-in-law and now my daughter and my son-in-law. We get along very well and we separate business from work. It’s been a very rewarding career and I'm very happy that I chose the path to funeral service.

Nancy: Since the theme is charity begins at home; the funeral home, I'd like to touch on Hurricane Sandy which affected you personally. The anniversary is coming up pretty soon, and I know ASD was very instrumental in giving donations during this terrible tragedy. Jessica Fowler really spearheaded this whole movement, so I'm going to let her speak to you about some of the issues and challenges that you faced during this trying time.

Jessica: Hi, Kevin and welcome. Can you tell me a little bit about how your funeral home prepared for Hurricane Sandy in advance?

Kevin: We really didn't prepare in advance because our funeral home is located in the middle of the island away from the water. The way we prepared for the hurricane was to get two portable generators that we could run for lights in the funeral home and the machines in the embalming room. We knew we would probably lose power but we had no idea how bad the hurricane was going to be. The only precautions that we took was regarding my father-in-law’s restaurant and catering home which is on the water. We piled sand bags up along the delivery doorway hoping to prevent the surge of water from going into the catering hall. Ironically the catering hall did not have a single drop of water in it. We lost electricity for four days but a quarter mile east and a quarter mile west of the catering hall everything was destroyed. We were extremely fortunate in that respect. Personally we prepared with batteries and food and my family moved out of Breezy Point and stayed with me because it was safer at my house than it was where they were living. No one anticipated the terrible end result of the hurricane. 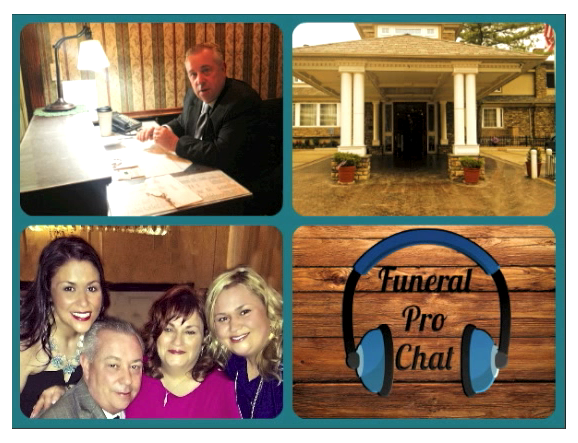 Jessica: You were very lucky. What were the first twenty four hours like after the storm hit your area?

Kevin: It was horrible. I live 1/2 mile from the water & my house only lost electricity. But, if you drove down the block from my house, there were boats on the streets. There was a fishing pier that was completely gone and neighborhoods were just destroyed. Houses were falling away, debris everywhere, trees down. You couldn't walk. The water was so high that the devastation was unbelievable. There were many who died and 120 people who lost their houses due to a fire. It was all so surreal. You realize that when you came home and you still had a house and you still had your family and your possessions just how fortunate you really were.

Jessica: So, without power for all that time, how were you able to communicate to the public to let them know that they could come to you for help?

Kevin: We wrote to the newspaper. We contacted a number of the organizations on Staten Island who had internet access. We also belong to the International Order of the Golden Rule and we sent out an email to all of the members that we were collecting donations for people and it just sky rocketed. My cousin who is a disc jockey in upstate New York called me and put me on the air. He wanted to know how bad things were down here and what they could do. A few days later, they rented a caravan of trucks, filled with food and clothing and they drove them down to Staten Island. They distributed the 6 trucks of donated goods and helped those most in need. We have a 4 car garage here at the funeral home and the 2nd day of us getting out the word that we were a drop off center, the 4 car garage was full and my father-in-law bought a circus tent that we erected in the parking lot of the funeral home. We not only filled the entire tent but we also went out and bought 4 cargo containers for the rest of the donations. We delivered on a daily basis throughout the winter months.

Jessica: So are there still many people who are still in need?

Jessica: I'm sure that the people that came to your funeral home appreciated the help that you were able to offer them and your reaching out to O.G.R is definitely something that a lot of funeral homes could take note from.

Kevin: There were so many funeral professionals that helped. There's a funeral director in New Jersey named Tim Ryan, who has several funeral homes on the coast. Tim lost one of his funeral homes, yet Tim was on the phone often to help us here. We personally donated about 6 funerals for hurricane victims. We didn’t ask for payment because these are your neighbors and your friends who’ve lost not only their homes but they’ve lost loved ones. One of the funerals we did was for a brother and sister who had nobody. The two of them died together in the hurricane and were buried together. We help people by doing funerals and we just didn't feel it was the right thing to do if you were to charge people considering all the devastation. That’s what I teach my students and we practice this philosophy here in the funeral home. Put yourself on the other side of the fence and treat people the way that you would be expected to be treated in return and that's how we run our business here and how we live our lives.

Jessica: What are some of the lessons that you learn from the whole experience?

Kevin: In times of trouble, the human spirit rises above all else. People helped each other and were there for each other. There were no lines of race, creed, color, where you lived, how much you made, it didn't make any difference. The goodness of mankind shined through just by how people were willing to help. We gave lunch every day for 3 weeks at the restaurant for people who were displaced, volunteering or working. Someone from Texas heard this and that we were serving everyone food on Thanksgiving. He and his family drove up from Texas with truckloads of homemade pies and he dropped off 500 pies from his family’s bakery. His family spent their Thanksgiving holiday serving food for three days. There are no words to describe the goodness that there was in people. Everybody helped everybody else.

Jessica: Hurricane Sandy brought out the good in a lot of people. Our own employees really stepped up and brought in boxes and boxes of donations, along with other funeral vendors.

Kevin: We got so much stuff from, from you (ASD) and your accounts and it just became a networking thing. We got boxes coming from everywhere. I'm talking huge boxes and stuff that these funeral homes collected on their own from their neighbors. The generosity and the outpouring was heartwarming. It reiterates the goodness of people especially the goodness of people in this profession. And that's what it’s all about. We do it because we need to put our head on the pillow at night with a clear conscience.

Nancy: Speaking of charitable works, you and your father-in-law John Scalia recently buried ten babies that had been left in the morgue in Staten Island.

Kevin: They were unclaimed babies and and the public administrator has a simple philosophy that no one is buried in potter’s field .We have a wonderful relationship with the Catholic Cemetery that has a section called the Guardian Angel just for infants and we were able to have all 10 children buried in graves with their names on a headstone. We always bury any baby for free. When my father-in-law was in mortuary school his brother and his wife lost a child and the funeral director at the time did not charge them for the baby. My father-in-law was so impressed by this man's generosity and goodwill that he swore he would never charge someone for the death of their baby. Since 1971 he has never charged a family for an infant death.

Nancy: You can find me on Facebook or www.FuneralProChat.com

Click here to listen to the full Podcast and hear the interview in it's entirety.

Funeral Pro Chat is a production of Burban Turner Media