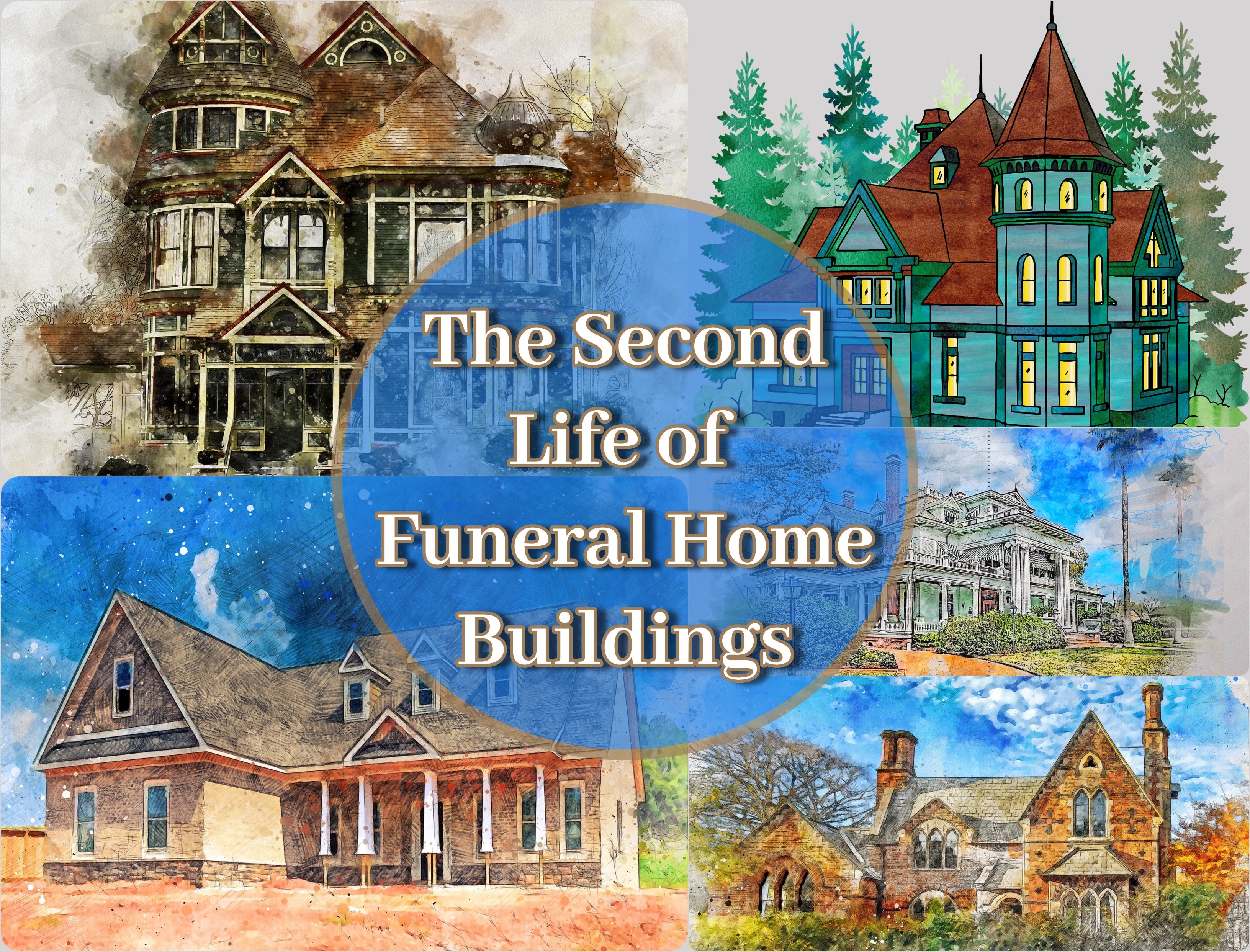 No one looks forward to attending a funeral service. It’s not an experience one typically relishes. However, for those with an appreciation for history and architecture, walking through the doors of a mortuary can offer one the feeling of being transported backwards in time. With so many funeral homes in America established during the turn of the century, these historic buildings are often adorned with many gothic revival style elements from the Victorian era. They display rare architecture features and details that preserve our connection to the past.

As funeral professionals look to expand into more modern facilities and developers look to maximize space in populated areas, more of these historic gems are lost every year. It’s always a sad thing to see an old mortuary building being demolished. It’s not like there are very many people today building mansions with stacked bay windows, tiffany glass doors, high pitched gabled roofs and dumbwaiters. Every one that is torn down can never be replaced. 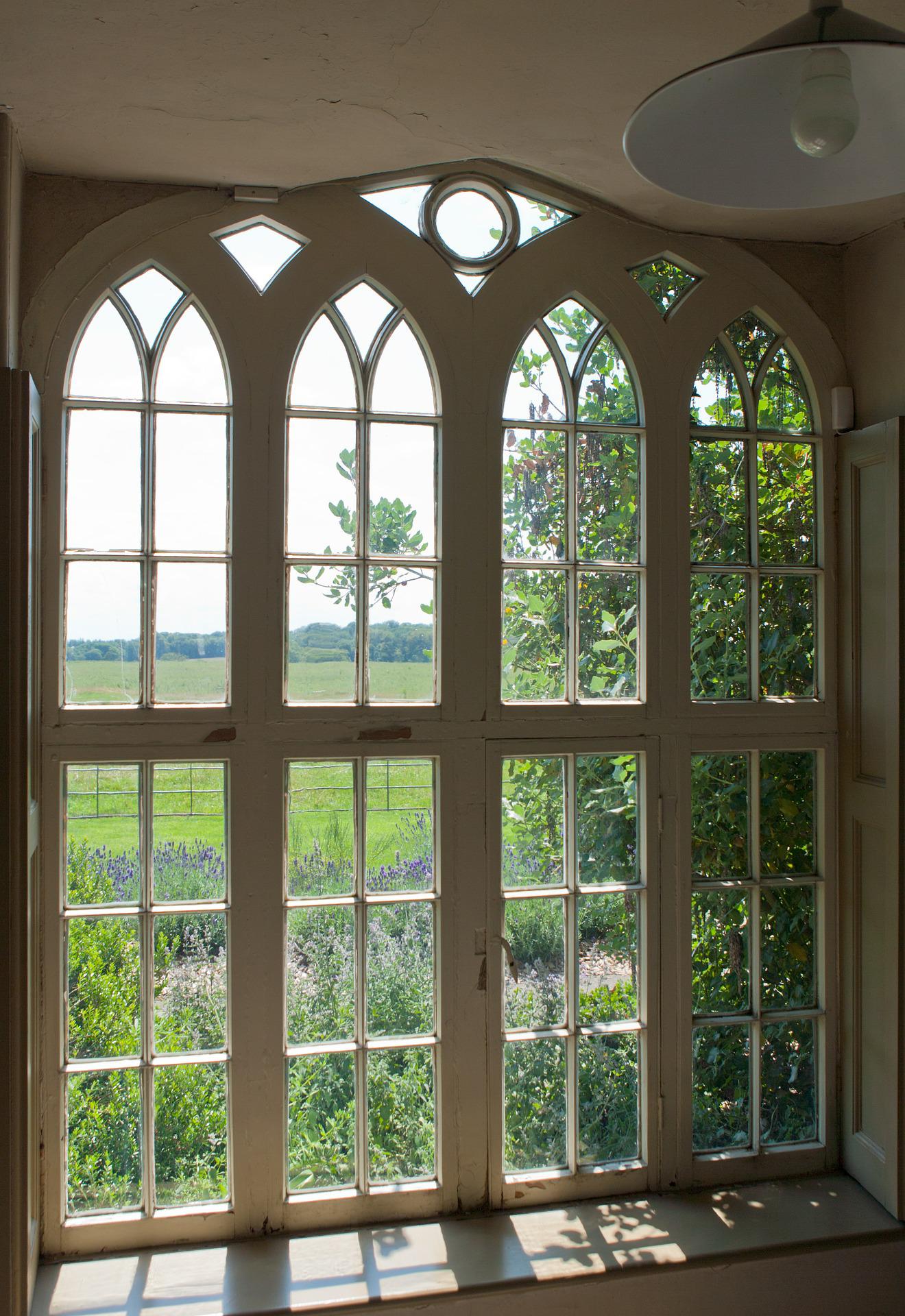 Fortunately, while some mortuaries do meet the cannon ball, many others are sold to someone who decides to preserve their history while giving the building a completely new purpose. From hipster coffee shops to paranormal-themed B&Bs, these former funeral homes survived by being reborn into something new. By recognizing what makes these buildings unique and blending it with modern touches, today’s architects have helped preserve the history of mortuaries.

Here Are 9 Epic Ways Funeral Homes Have Been Repurposed

You may be surprised to learn there are quite a few restaurants in America that are housed in former mortuaries. When setting out to create this list, we knew about one or two of these famed dining spots, but we were floored to discover you can actually find them all over the country. We even stumbled upon a list dedicated entirely to “spooky mortuary-turned-restaurants” which didn’t even include our favorite one (see below).

It definitely makes sense why this seems to be the most common way a funeral home is repurposed. There are a lot of the people who appreciate a unique atmosphere while enjoying a meal. In addition to impressing guests with striking architectural elements, owners can also embrace the macabre and build their restaurant theme around their former occupants. Who wouldn’t want their business to be included on one of those tourist trap ghost tours every city offers?

While we stumbled upon quite a few mortuary-turned-restaurants, our favorite two have to be the Five Fisherman Restaurant in Nova Scotia and the Linger Eatuary in Denver, CO, as both of are located in funeral homes with storied histories.

Located in Halifax on the island of Nova Scotia, the Five Fisherman Restaurant is the former site of Snow & Company Undertaker. During its time as a mortuary, it served as the morgue for bodies recovered from the Titanic as well as those killed in the Halifax Explosion in 1917. 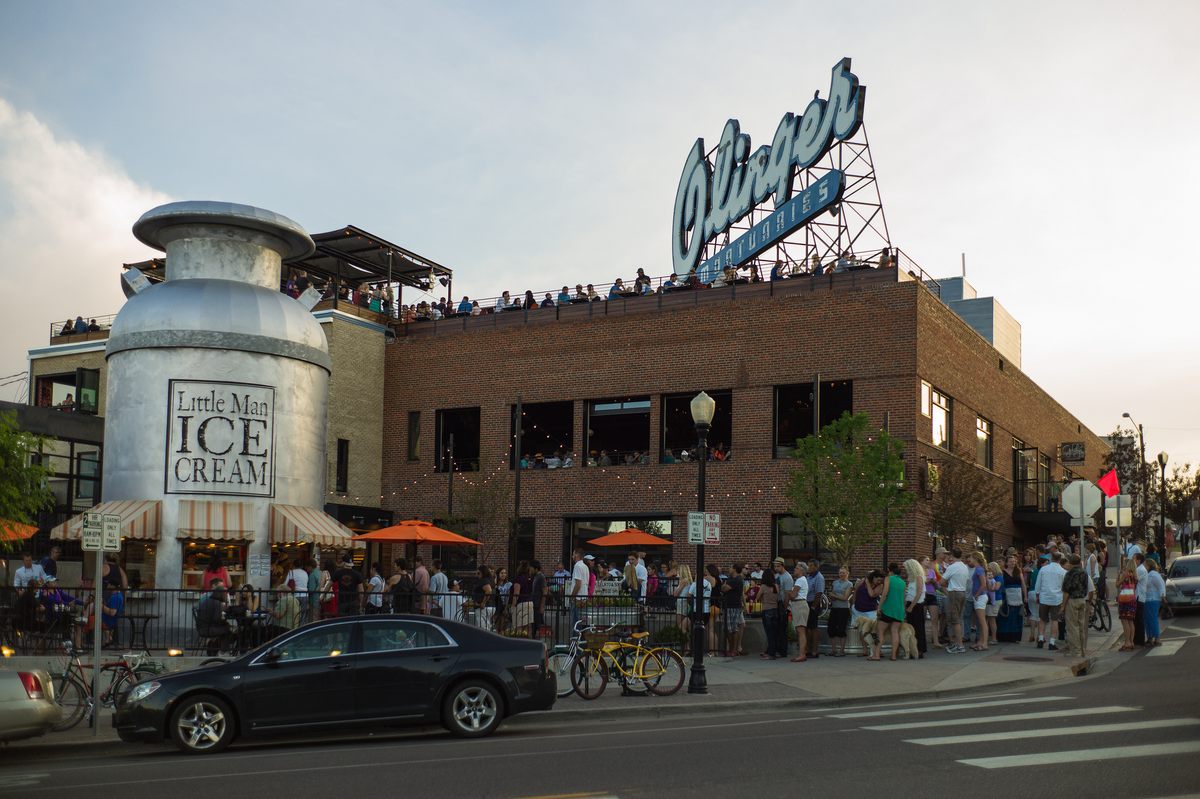 Located in the former Olinger Mortuary, the funeral home that famously stored Buffalo Bill’s remains while Wyoming and Colorado disputed which state would provide his final resting place, Linger Eatuary fully embraces its famed past. From keeping the old building sign up to serving cocktails in formaldehyde bottles, this popular restaurant is overflowing with funeral-themed accents.

While watching a recent episode of "The World’s Most Amazing Vacation Rentals" on Netflix, we were fascinated to learn about a growing “paranormal tourism” trend taking hold across America. From bona fide ghost hunters equipped with high tech sensors to average folks looking for a good scare, there are a whole host of people out there wanting to stay in a place reportedly visited by the dead. Mortuaries, both by virtue of their purpose and their gothic architecture, often provide the ideal location for establishing a haunted B&B. Like restaurants, there are much more of these across the country than you might have ever suspected. In addition to offering rooms for rent, many also hold murder mystery dinner events for guests.

Located in the former Hrabak Funeral Home in the isolated town of Chelsea, IA, the Periwinkle Place Manor features videos on their website supposedly captured during previous “ghost hunts.” The funeral home, established in 1892, was the first mortuary built in the state of Iowa. 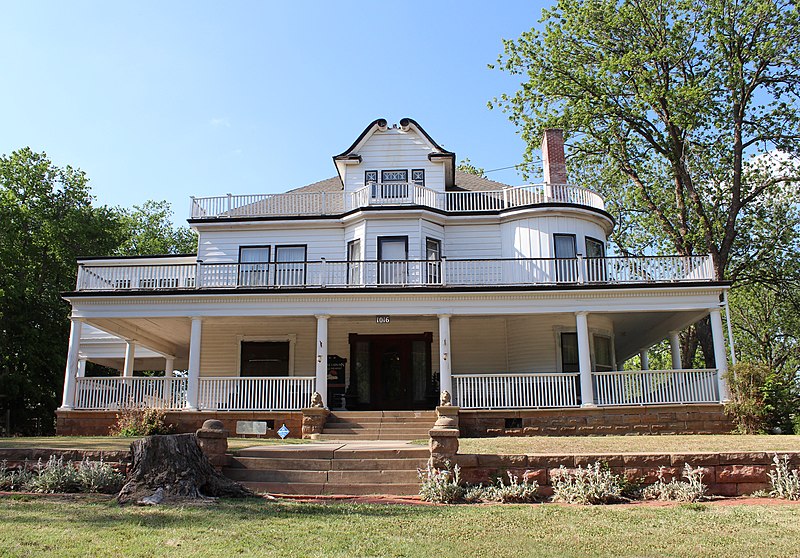 Spooky lore abounds at the Stone Lion Inn in Guthrie, OK. The majestic Victorian mansion has a rich history dating back to 1907. Over the years, the building has served as both a family home and mortuary, with many reported sightings of paranormal activity taking place under its roof.

When looking for a property to convert into their future dream home, some couples set out to find a historic building they can renovate. Since there isn't exactly an excess of Victorian-style mansions on the market at any given time, it’s not surprising some end up at the doorstep of an old mortuary. The idea of living and raising a family in such a building might seem extreme to those outside of the profession, but funeral home families have been residing within their buildings for generations. So, this is only really a factor for those who watched A Haunting in Connecticut maybe one too many times. For those brave enough to take on such a project, transforming a mortuary into a family home is one way to guarantee you will undoubtedly stand out from the other houses on the block.

For those in a competitive housing marketing, renovating an old funeral home building can also save would-be home buyers a lot of money and headaches. This Minnesota couple was able to purchase a former funeral home for only $60,000 which they now plan to remodel.

On this blog, we have written often in the past about the impact of the overdose epidemic on grieving families and on the funeral service profession. This is why we were so moved when we stumbled upon a story about a York, PA funeral home that was repurposed to function as a recovery center to help those struggling with addiction, homelessness or mental health. Just for Today Recovery and Veterans Support Services is located in a stately brick mansion that was erected in 1912 and formerly housed two different funeral homes in the past. We love the idea of a place that once served to help the bereaved now being used to help those in crisis rebuild their lives. 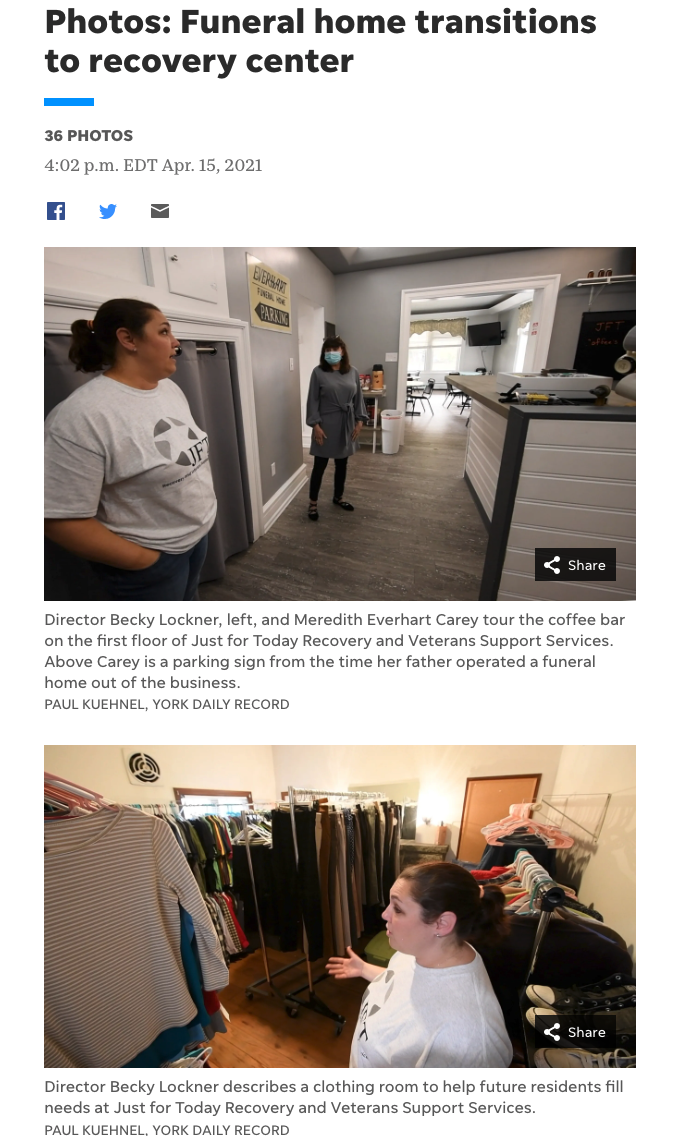 People visit museums to understand and celebrate our past. What could be a better location for a museum than a building with a history all on its own? There are quite a few of these dedicated to funeral history, including the Turnbull Heritage Museum in Biggsville, IL, which is located in the former Turnbull Funeral Home. The museum displays funeral relics dating back to the 1880s. People’s Mortuary Museum in Marietta, OH offers a similar funeral history museum experience, displaying items such as antique hearses and vintage embalming equipment.

Beyond funeral history, old mortuary buildings have also become museums for artwork and community history. There is the Douglas Mansion in Cedar Rapids, IA, which once housed The Turner and Linge Mortuary and is now owned by a historical society that embraces the building’s impressive history. Then there is the Rapoza Center for Arts in Adams, MA which is located in the former McBride Funeral Home.

Finally, if you ever find yourself in Buffalo, NY, you can visit the Iron Island Museum, which houses community history artifacts but is more known for its ghost lore. The building was erected in 1883 and was first used as a church before serving as a funeral home from 1956-2000. Today, it is used by the Iron Island Preservation Society of Lovejoy to display antique items like vintage bicycles and military memorabilia. In recent years, it is visited more often by ghost hunters than history buffs, placing it on many "paranormal tourism" lists.

You may remember a few years back when a funeral home made headlines by opening up a Starbucks within their building to serve families. While this certainly got a lot of attention, it was actually not the first time coffee has been brewed and sold in a mortuary. That honor goes to Under Grounds Coffee & Roastery in Buffalo, NY, which opened in 2017 inside the former Peter K. Leslie Funeral Home. The aptly named cafe pays homage to its previous occupants in multiple ways, such as preserving the original guestbook stand and including a “cremation station” to hold coffee creamer. From our research, Under Grounds appears to be the only coffee shop built in a repurposed funeral home building. We hope they serve Death Wish Coffee!

"I've been to plenty of wakes here and a bunch of my friends have, but we often get people that come in and show you this is where grandpa was laid out and that's part of the reason we decided to pay homage to what was here before us,” shared owner Sarah Heidingergrew in an article.

In 2020, the entertainment company, PerplExodus Escapes, made headlines when they announced they planned to convert a nearly 100-year-old former mortuary into a new escape room attraction. Located in Johnson City, TN, the building was originally built in 1927 and was previously the location for Gray Funeral Home. Today, it serves as a fun entertainment attraction featuring escape rooms and a murder mystery dinner theater. In the video above posted before the official opening, you’ll see PerplExodus employees discuss how they planned to remodel the building. 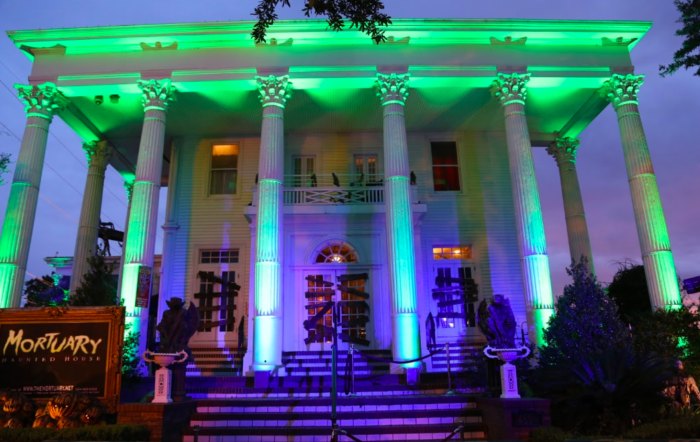 The Mortuary Haunted House in New Orleans is a 150-year-old, 3-story mansion that served as a mortuary for roughly 80 years and has been the site of numerous paranormal sightings. Billed as “a haunted house in a REAL haunted house”, it has been operating as a popular Halloween attraction in New Orleans since 2007.

Like restaurants, you don’t have to look too far to find a bar that is in a building that used to house a mortuary. There’s Fat Matt’s Vortex in Kansas City, KS, which still has a crematory located in the basement. Over on the west coast, you can find the Pine Box in Seattle, which was once the home of E.R. Butterworth & Sons Family Funeral Business and still features interior relics from the mortuary like the original chapel pews. Rounding out our list is the Abbey on Butler Street in Pittsburgh, PA, which offers a coffeehouse, pub and bistro all under one roof. The impressive historic building was once a church meeting hall, a stonemasonry, a brass foundry, and a funeral home at different times throughout its history.

9. A Psychic Academy (yes, you read that right)

Perhaps the most interesting, although not entirely unexpected, usage of a former funeral home is as a site for mediums to commune with dead spirits. After sitting vacant for over 10 years, the Rhodes House in Dunkirk, NY was purchased in 2021 by Rev. Ivy Rivera who now uses the site to hold classes and seminars for fellow psychics. Built in the late 1800s, the Victorian-style building was formerly the site of Gardner-Colletti Funeral Home. Today, it is the new home of the Ivy League Psychic Academy where Rivera keeps busy renovating the property and “raising up the next generation of lightworkers.” Rivera, who also uses the property for her active psychic reading business and to offer “supernatural tours” to the public, explained in an article that the spirits directed her to purchase the Rhodes House. 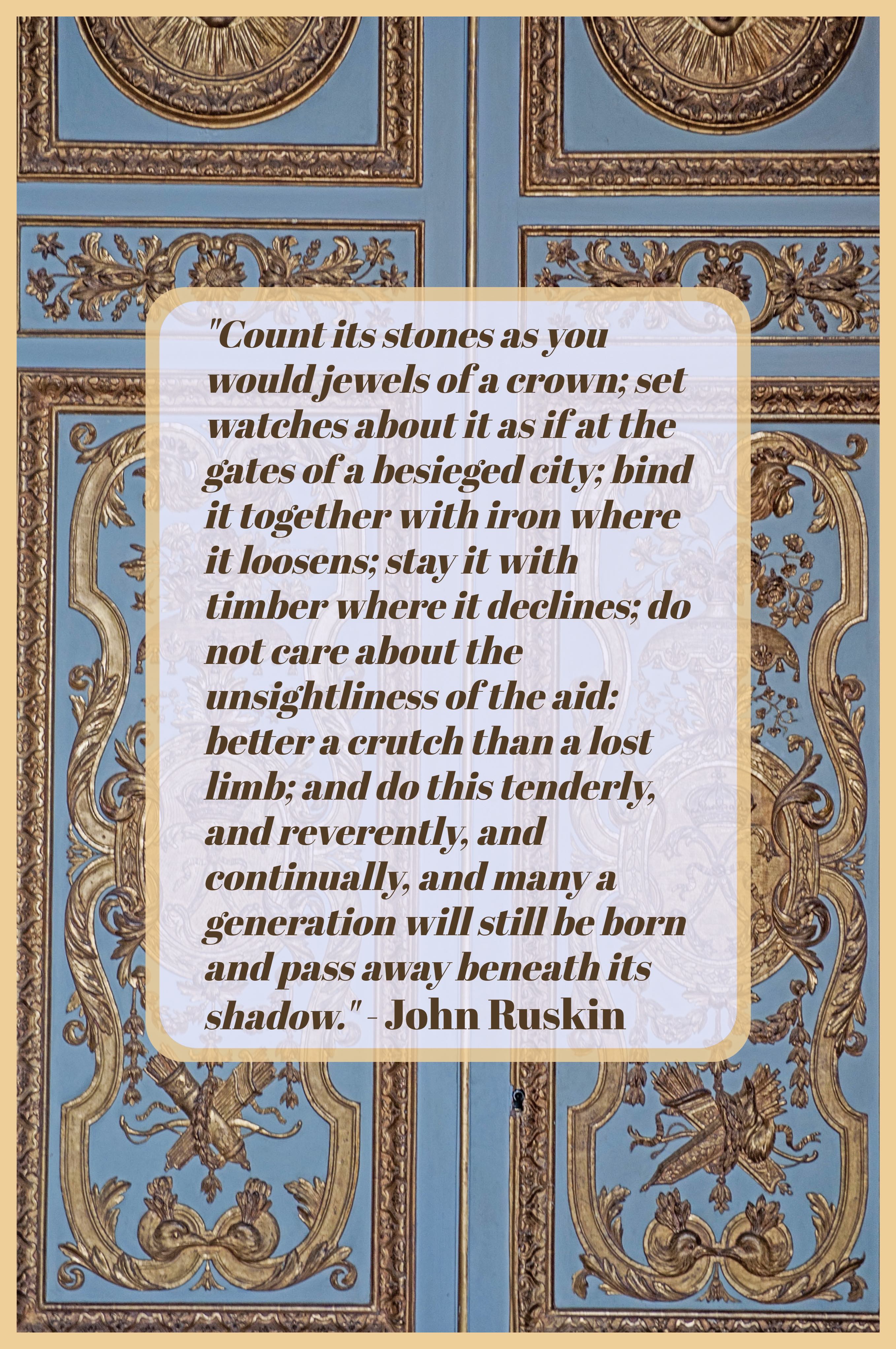 What do you think is the most unique or interesting way a funeral home building has been repurposed? Which building on our list surprised you the most? Please share in the comments below.

8 Ways Cemeteries Can Enliven Their Communities

7 Funeral Professionals with a Passion for the Performing Arts

6 Things You Didn't Know Were Invented by Funeral Directors