7 Out of the Ordinary Gifts Left On Famous Gravesites 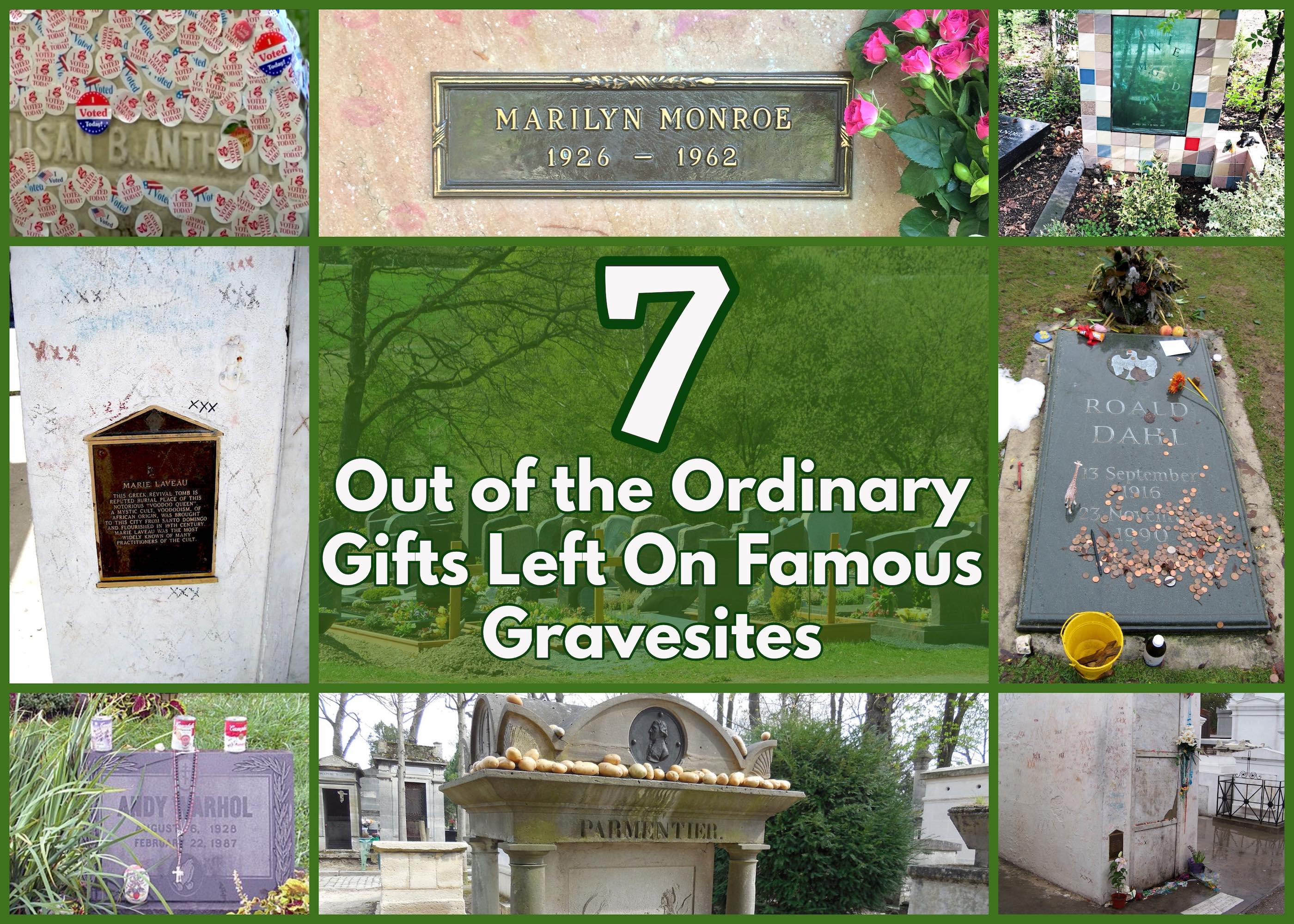 “The cemetery is an open space among the ruins, covered in winter with violets and daisies. It might make one in love with death, to think that one should be buried in so sweet a place.”

In the early 1800s, poet Percy Bysshe Shelley wrote these words upon reflecting on the life and death of John Keats. It is a moving passage that reminds us how the experience of spending time within a cemetery can provide deep moments of reflection for visitors. Gravesites are not just physical spaces but symbolic places of connection. Many are driven to visit the final resting places of people they may not have known in life but wish to honor and remember in death. 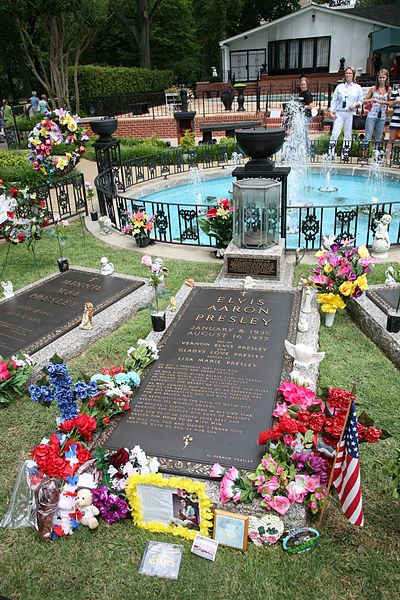 For centuries, people have flocked to burial sites of religious icons and leaders. During the 19th century, folks often picnicked in cemeteries and spent their spare time making gravestone rubbings of the carvings they found the most striking. While scores of books have been published for decades containing the locations of famous gravesites, in recent years this process has been simplified with helpful online databases. Today, a growing number of people will plan their vacations around cemetery visits. Take for example - the funeral director who travelled to all 38 Presidents' gravesites or the scores of people who travel to LA solely to visit Hollywood’s celebrity-filled cemeteries.

It is interesting to consider how one’s popularity or notoriety in life can impact one’s final resting place. This is sometimes reflected even in the items that are left behind at the grave. While it is certainly common to find flowers, letters, flags or coins on the graves of famous individuals, there are some that attract a different type of remembrance. From the lipstick kisses on Marilyn Monroe’s tomb to the “I Voted” stickers placed on Susan B. Anthony’s grave every Election Day, these final resting places have become famous for the gifts and tokens left behind. 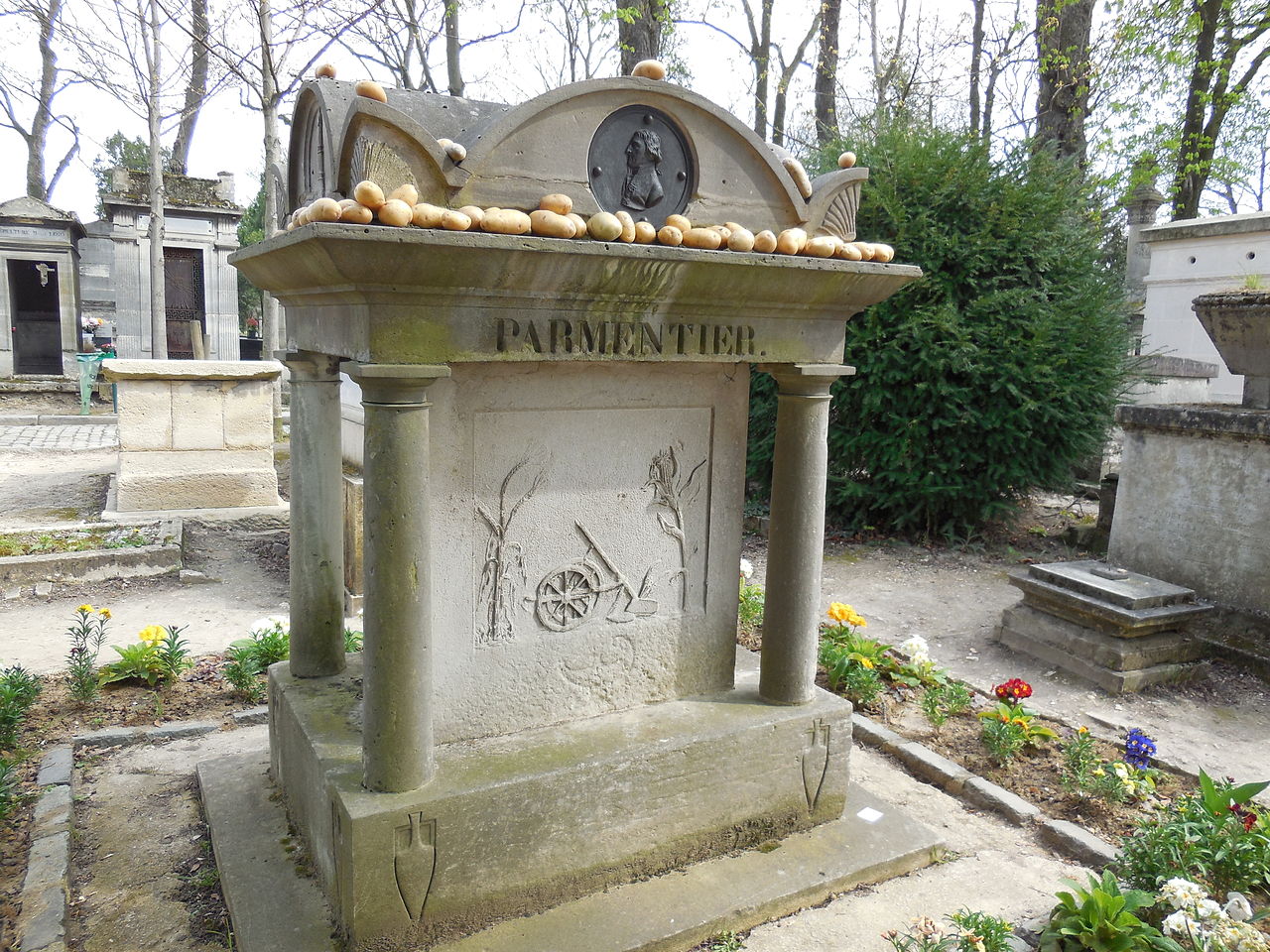 Do you remember that scene in The Martian where Matt Damon’s character realizes he can survive on the red planet by growing potatoes? While that story may have been fictional, it brings to mind a story about another man who discovered that tubers could be a literal lifesaver. French scientist, Antonie-Augustin Parmentier lived in France during a time when potatoes were considered unfit for human consumption. After becoming a prisoner of war in Prussia during the 7 Years War and forced on a constant diet of potatoes, Parmentier discovered through firsthand evidence that they were not harmful to humans and could in fact help keep the people of France fed during times of famine.

Thanks to Parmentier's efforts, the potato not only kept the poor fed but also became a staple of the French diet. In Paris’s famed Pere-Lachaise Cemetery, among the rows of gravestones for celebrated icons you’ll find a gravesite bordered by potatoes plants. There is often at least one potato if not many sitting on top of the headstone as well. While Permentier had many great accomplishments throughout his life, his work championing the potato became his greatest legacy and is reflected by the fact that people still bring them to his grave more than two hundred years after his death.

2. ‘I Voted!’ Stickers on Susan B. Anthony’s Grave

It's known as a Rochester Election Day ritual.

Every Election Day, women travel to Rochester, NY to visit the grave of famous American suffragette, Susan B. Anthony. They come to leave behind their ‘I voted’ stickers on her gravesite. Anthony fought for women to have the right to vote so this poignant display every year serves to honor her life’s work. Many will line up at Rochester’s Mount Hope Cemetery in the early morning and wait in line for hours just to have the honor, prompting the cemetery to extend hours during the election season to allow more visitors. The ritual has become so beloved and widespread that the cemetery decided they needed to create a sleeve for the grave in 2020 to protect the fragile marble from being damaged by the adhesive on the stickers. We commend them for encouraging this awesome tradition while taking steps to ensure Anthony’s headstone remains preserved. 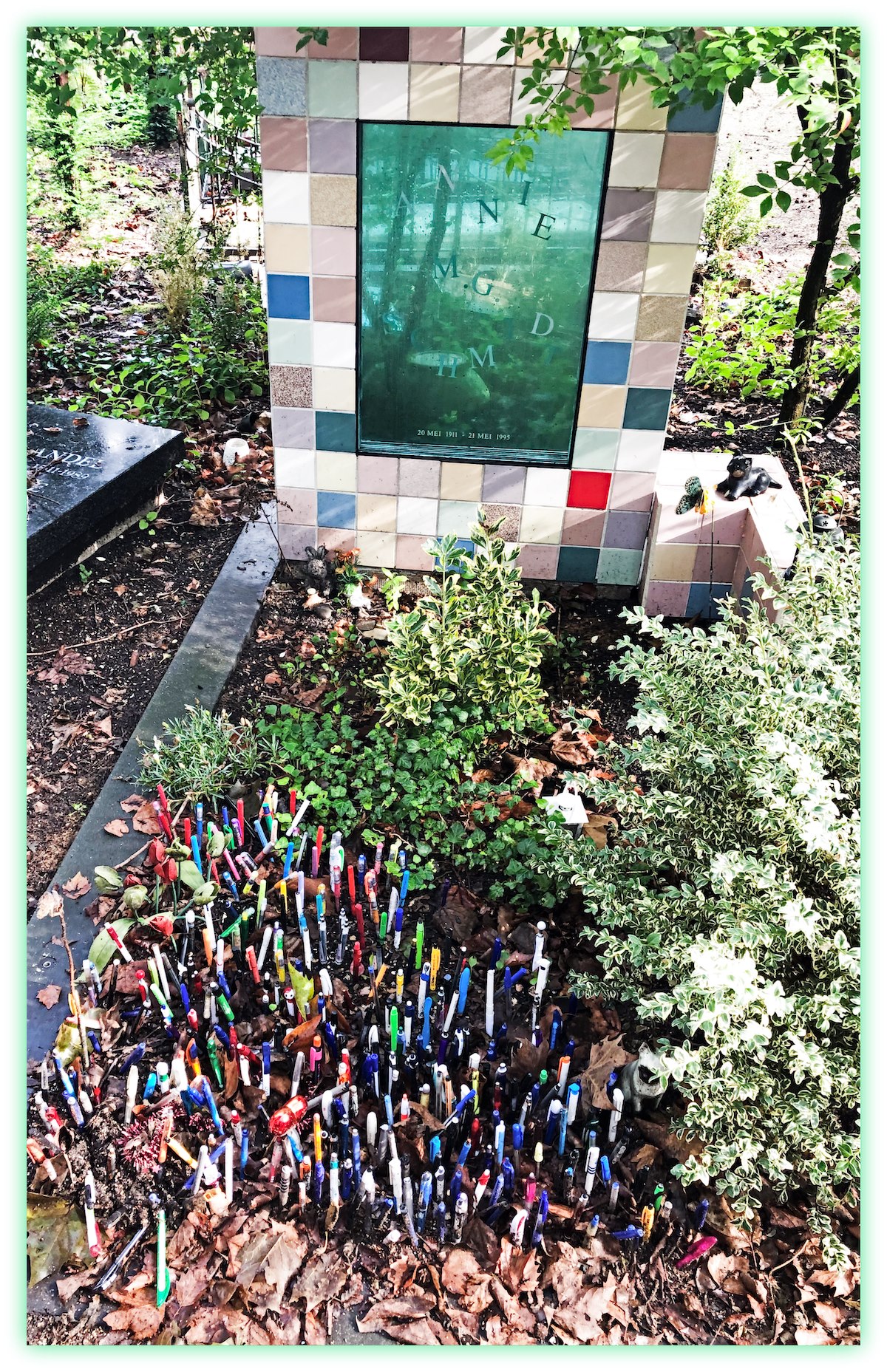 When ASD Family-Member Owner, Marty Czachor Jr., traveled to the Netherlands in 2019 he made it a point to visit the picturesque Zorgvlied Cemetery which is well known for its collection of creatively decorated graves. Among the striking monuments there, he discovered the grave of beloved children’s author, Annie M.G. Schmid. Known as “the mother of Dutch theatrical song,”Annie penned beloved children's literature and is considered to be one of the greatest Dutch writers of all time. To pay tribute to her life, cemetery visitors will often leave behind pens and pencils at her gravesite. As you can see from this photo Marty captured, the tradition is still going strong today more than 20 years after her death. 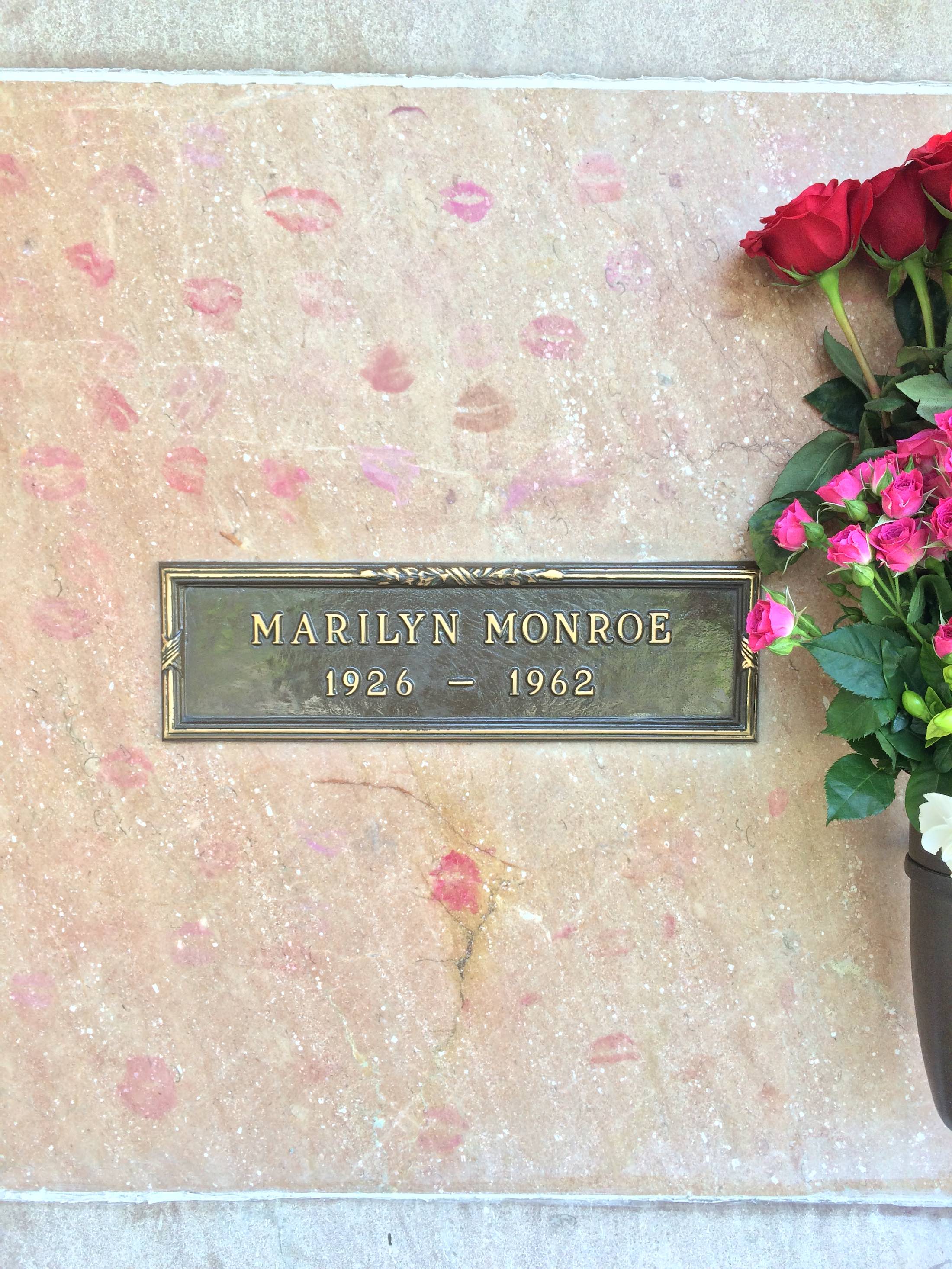 Among the rows of crypts located at Westwood Village Memorial Park, there is one that stands out from all the rest due to the pink hue of its marble. One might assume from a distance that Marilyn Monroe’s tomb is pink by intention, but when you move closer you can see that the pink shade is not a different type of marble but rather the effect of red lipstick marks being left on monument over the years. The tomb is often covered with multiple lipstick marks left by her adoring fans.

Just as she commanded attention in life, Monroe’s tomb continues to attract interest to this day. It is pretty incredible to think about how that many years of lipstick residue could result in marble stone actually changing color. Of course, you would be forgiven if, in 2022, the idea of all those people putting their lips on the same few inches of space might not sit well. It will be interesting to see if this trend will live on in perpetuity, like Monroe’s memory, or if the cemetery will one day put a stop to it. 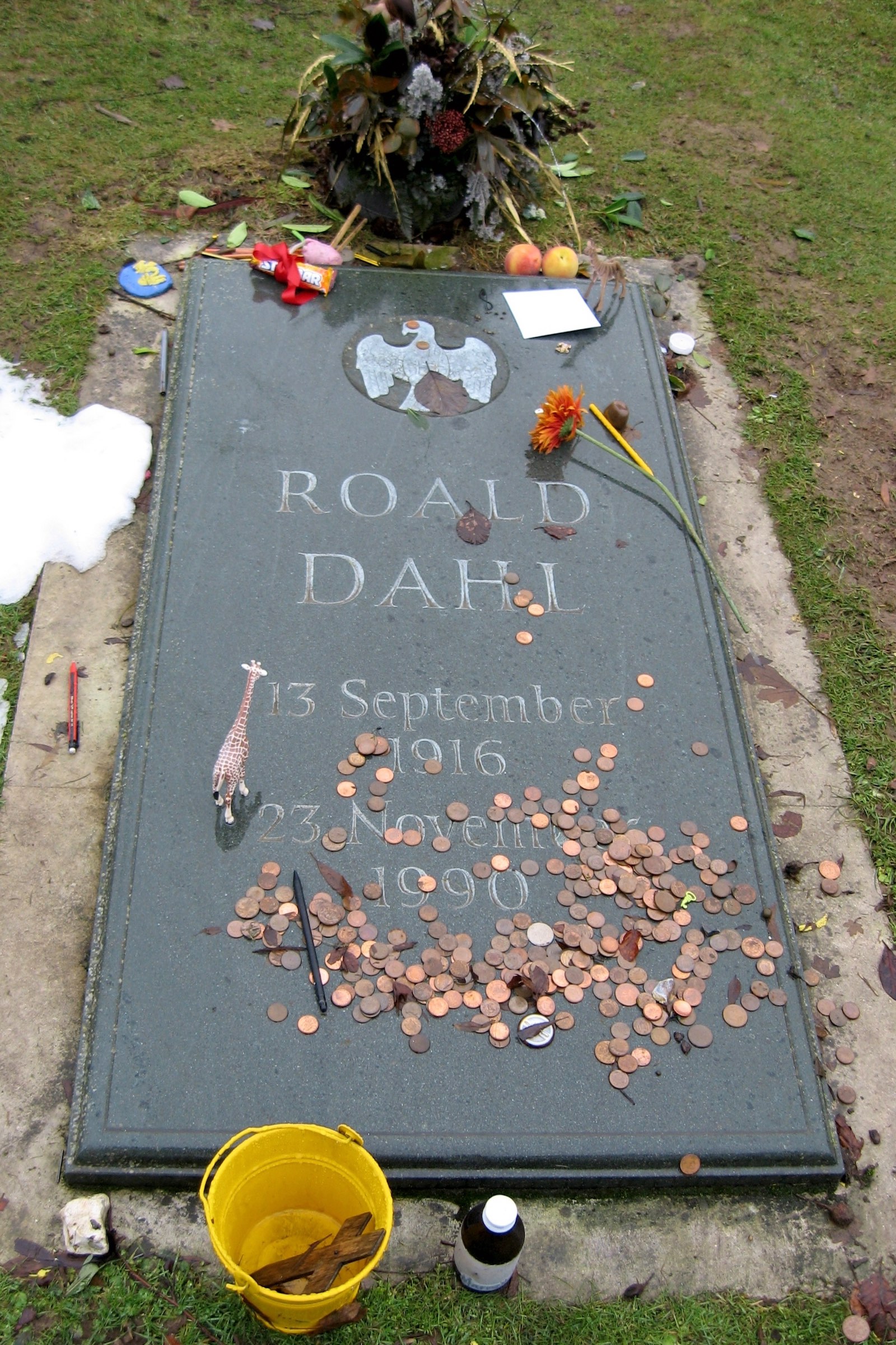 To a certain generation, Roald Dahl is perhaps the most influential writer of all time. Depending on the day you visit the beloved author’s grave at Saints Peter and Paul Cemetery in England, you might find any number of items sitting atop the modest black slab. A chocolate bar left by someone who loved Willy Wonka and the Chocolate Factory or perhaps a row of peaches left by visitors who were fans of James and the Giant Peach. In addition to his love of writing, Dahl was also an avid gardener with a special penchant for enormous onions. This is why, among the toys, peaches and chocolate bars you might also spy a random onion placed beside his grave. Amazing how one man’s life (and incredible imagination!) can lead to so many symbolic associations. 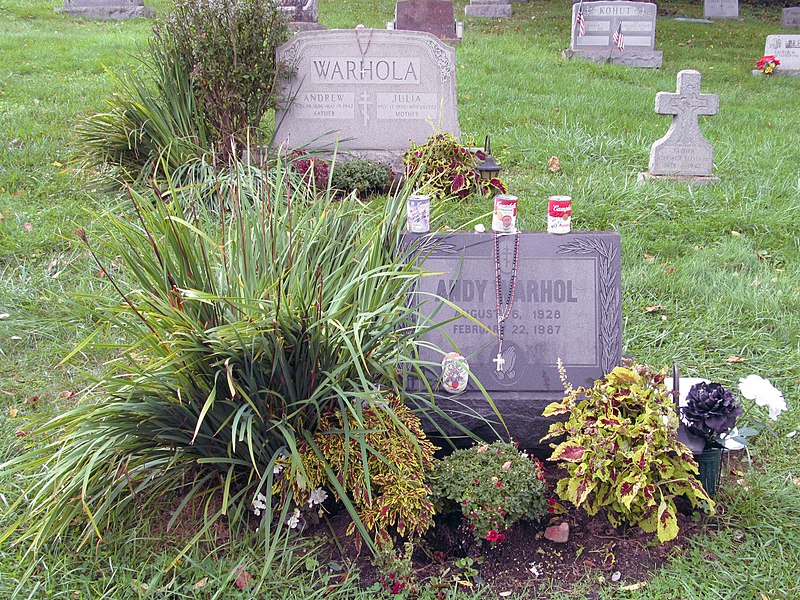 About 20 minutes outside of downtown Pittsburgh, the unassuming St. John the Baptist Byzantine Catholic Cemetery houses the remains of visual artist, Andy Warhol, father of the pop art movement. For a man with such a larger-than-life, eccentric personality, it is surprising just how ordinary looking his gravesite appears to be at first glance. Then again, Warhol was renowned for taking everyday objects like the Campbell’s Soup Can and making them the focus of his artwork so perhaps this is exactly as he would have wanted it. Of course, there is one thing that makes the grave stand out and that is the many soup cans that are often left on top of it by visitors. It is a very fitting symbol for a man who transformed ordinary objects into works of art. 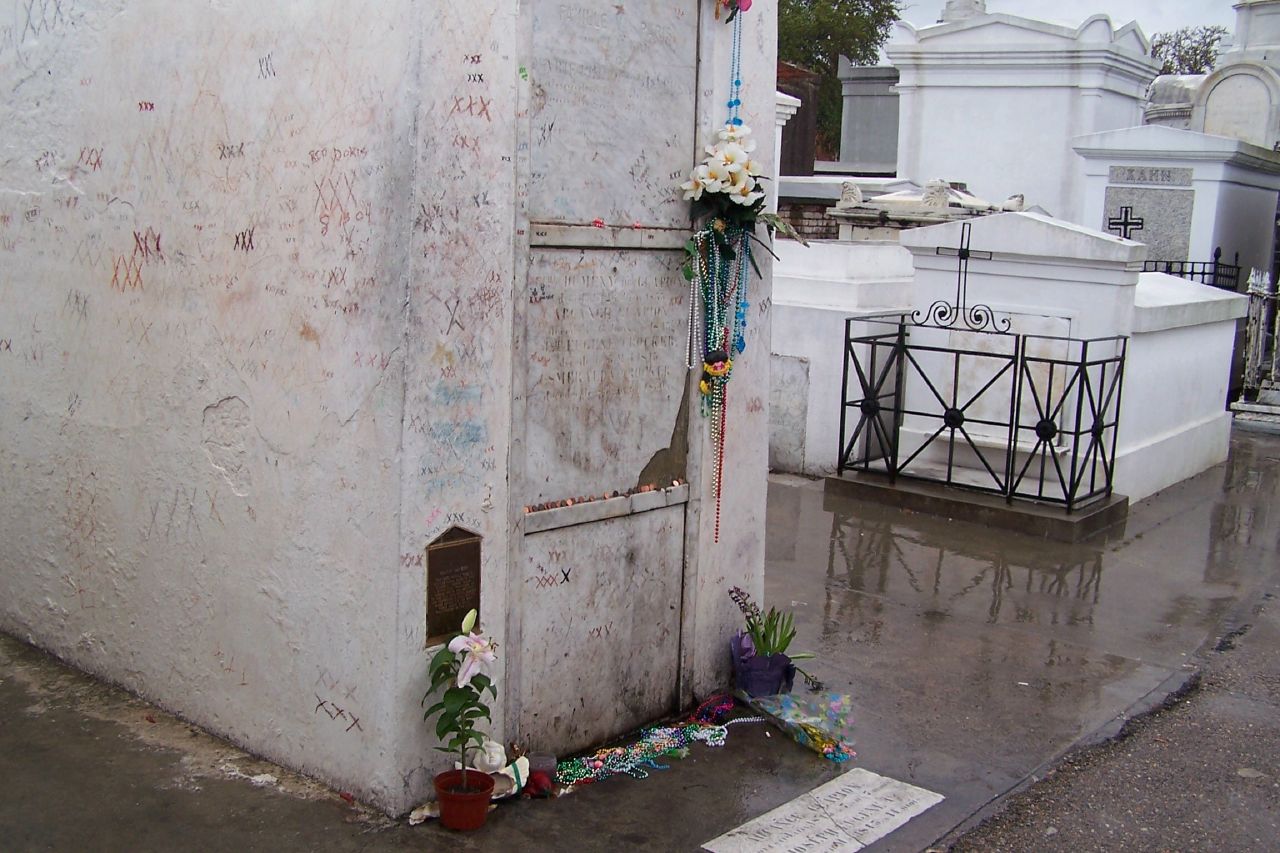 Notorious New Orleans Voodoo Queen, Marie Laveau, may or may not be buried in St. Louis Cemetery No. 1. Laveau died in 18881 and there is some debate among where her remains were interred. However, that doesn’t stop the flood of tourists and occultists who visit the site where she is believed to be entombed every year, often in hopes of having their wishes granted. You see, years ago a rumor began to circulate that if you drew an X on the tomb, turned around three times, knocked on the tomb and yelled out your wish, your desire would be granted. If that sounds absolutely insane to you, you’re not alone. For years, cemetery conservationists have tried to discourage this, arguing that the absurd ritual has absolutely no basis in voodoo practice and damages the fragile 200-year-old tomb.

Today, in order to visit the tomb, you must tour the cemetery with an authorized guide due to the prevalence of people coming to leave their mark. Interestingly enough, there are two other tombs in the cemetery that others claim are Laveau’s true resting place. Both are marked with many Xs as well. In addition to (illegally) leaving the Xs behind, tourists have also left hair pins and accessories as gifts for Laveau who was rumored to have been a hairdresser. Of course, even this is not known for certain much like most of Laveau’s life. Interesting that the person who has the second most visited grave in the United States (second only to Elvis!) remains shrouded in mystery.

Which one of the items on our list surprised you the most? Did we miss any noteworthy gravesite gifts? Please share in the comments below.

8 Ways Cemeteries Can Enliven Their Communities