They Finally Got it Right: Why Every Funeral Professional Should See the Film ‘Getting Grace’ 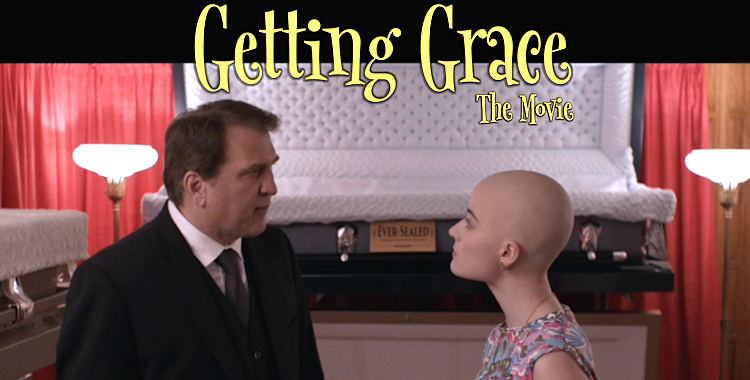 Imagine you were to take all of the funeral director characters from movies and television shows and lined them up in a row. With a few exceptions, each one would spout off the same clichéd lines uncreative writers have given them for decades. Just like an assemblage of politicians, each one’s awfulness becomes almost indistinguishable from the next. For actual funeral directors watching the endless parade of misrepresentations, it can be easy to lose heart in the Entertainment industry’s ability to ever accurately portray our profession.

Well, we’ve got good news. They finally got it right!

Just in time for the holiday season, Getting Grace will be released in Wal-Mart stores across the country on November 6 and can be preordered anytime through Walmart.com.

While you may still be having trouble deciding which Election Day candidates are the lesser evils, there is one decision you won’t have to struggle with this Tuesday: the choice to order Getting Grace on DVD. Directors have been waiting a long time for a movie that delivers sharp writing, compelling acting, and an authentic representation of the funeral profession

From the moment you see the credits appear on different casket lids, Getting Grace hooks you. Within the first five minutes, you become immediately invested in the movie’s characters, setting and important themes. Never before have so many funeral directors and funeral associations rallied behind a film. There is a reason why the National Funeral Directors Association asked actor, writer and producer, Daniel Roebuck, to attend the past two NFDA Conventions. They recognize Getting Grace as a rare gem every funeral director should see. Furthermore, Daniel's talent on-screen is complemented by his warm and easy-going personality off-screen. His reverence for the work of funeral directors is apparent every time he speaks at an NFDA event.

At the 2018 Convention, the NFDA held a movie screening of Getting Grace that was attended by hundreds of funeral professionals. We had an opportunity to talk to Daniel about the movie’s upcoming DVD release and to speak with Ed Defort, Editor of The Director magazine, about the impact of this movie on our profession. 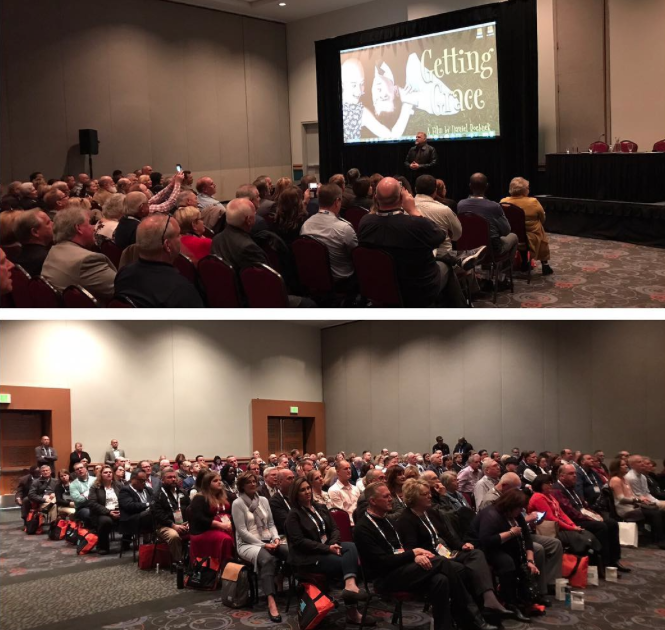 Not an empty seat the Red Carpet Premier of Getting Grace at the 2018 NFDA Convention (Photo by Ed Defort, Editor of The Director magazine)

During their NFDA Campfire Session, Daniel and Ed answered questions from funeral directors in attendance about the making of the Getting Grace and discussed how the film can be used as a centerpiece in funeral home community outreach events.

Watch the video below to learn more about this opportunity and hear from other funeral professionals that have hosted Getting Grace events.

“We’re going to make Getting Grace available to you, the funeral industry, because we never anticipated the kind of feedback we’re getting from the movie, especially from the funeral director community,” Daniel shared. “I don’t think there is a better tool with which you might be able to open up discussions about preneed or unique funeral opportunities. Getting Grace just covers all that. We didn’t set out to do it, we just set out to make a movie that entertains people, but we have found that its also getting people thinking about exactly this process. We would like you to consider licensing Getting Grace and will help you with anything you need.”

Bill Jankowski, Daniel's character in the film, is a funeral director who has difficulty relating to other people. Bill’s perspective is completely transformed by Grace, a 16-year-old girl dying of cancer. Grace is played by Madelyn Dundon, a young actress who is truly a revelation. It is hard to believe this is her first starring movie role because she is so real it almost feels like she could walk right out of the film and into your life.

In the film, you also get to meet Bill’s sister, Mary Jankowski, who is played by Diane Wagner. The film does a wonderful job of showing how differently funeral directors might approach their work. There is a great line Mary gives early in the movie where she explains how in the funeral business, “there are huggers, and ugh!-ers” – meaning that some directors get involved in funeral service because they love to be around people and others prefer to work behind the scenes. The dynamic between Bill and Mary is such a joy to watch because never before in any movie or television show have you seen a relationship like theirs. Sibling banter blends seamlessly with funeral home jargon, producing dialogue that is both hilarious and sincere. The characters are fully formed and seem very much like real people.

As we all know, funeral directors are one of the most poorly represented and easily misconstrued groups in film and television. Their depictions are usually relegated to shifty or untrustworthy characterizations. Getting Grace truly turns that well-worn formula on its head. While Bill is very cynical and disenchanted with his life in the beginning of the film, he is still a character the audience can easily identify with and relate to.

“I am grateful to have been able to shine a very positive light on the funeral home profession and, in turn, on many of those who serve our community at the end stages of life,” Daniel shared.

Although the TV show Six Feet Under did a superb job of showing what goes on behind the scenes in a funeral family, it had many adult themes, some of which were very dark and not appropriate for minors. The same can be said for the spine-tingling new Netflix show, The Haunting of Hill House, which features a very compelling performance by Elizabeth Reaser as a funeral director and embalmer, but may be too frightening for children. Getting Grace, on the other hand, gives funeral families the opportunity to watch a movie together and see their lives represented on screen for the first time.

In addition to its genuine portrayal of funeral directors, Getting Grace has done an exceptional job at authentically depicting the profession as a whole. Every detail was considered heavily to ensure the film was a true reflection of what goes on inside a funeral home. Much of the film is shot within the John F. Herron Funeral Home in Bethlehem, PA as well as the Sell-Herron Funeral Home in Allentown, PA, which are owned and operated by Demetrios and Paula Herron . Daniel and Demetrios attended the same High School in Bethlehem, PA where the movie takes place. Daniel shared that his friend’s advice and wisdom was instrumental in developing both the characters and setting of Getting Grace. 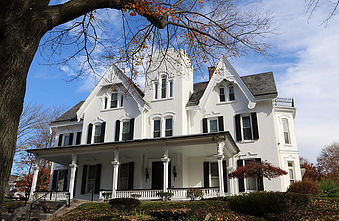 John F. Herron Funeral Home & Crematory in Bethlehem, PA, one of the locations where Getting Grace was filmed

How many times have you seen a funeral scene in a movie or TV show only to find yourself counting inaccuracies rather than watching the action? How many times have you asked, ‘why couldn’t they have just asked a funeral director?’ The producers of Getting Grace were careful not to make this mistake. According to Daniel, Demetrios and Paula helped the film producers with set design and the placement of props in the funeral scenes. They also read over the script to assist with terminology. The entire funeral profession owes a debt of gratitude for these directors who took time out of their busy schedules to help ensure this movie accurately represented the funeral home business. The outcome of the their efforts will no doubt have a positive impact for all.

While funeral directors will find a lot to love in the movie Getting Grace, the storyline of the heartfelt dramedy will resonate with many people. It is a story about finding the right perspective to fully live your life and explores how people can unexpectedly alter your preconceived notions. The film centers arounds Grace, an exuberant teenager with terminal cancer who is determined to explore every aspect of life. This journey along the spectrum of human emotion results in Grace having a profound effect on just about every person she encounters in the movie, inspiring them to ask themselves, am I really living my life?

“Getting Grace and it’s messaging is important, not just for funeral homes, but for everyone to hear and to live it every day.”-Kirstie Smolyk, Park Memorial Funeral Homes in Edmonton, Canada.

For firms that want to help spread the message of Getting Grace and show their community the realities of running a funeral home, Daniel and his team can help. Visit gettinggracethemovie.com and click on ‘Funeral Directors.' Then, enter the password ‘Funeral’ to learn how you can obtain the movie license for your funeral home. With this license, you’ll be provided with the theatrical version of the film along with promotional videos, posters, artwork and other design assistance to help you with branding your Getting Grace screening event. Here’s an example of one of the videos created for the directors at P ark Memorial Funeral Home before their August movie screening event.

“The Getting Grace team is happy to meet your needs and work within the budget and scope of your event. While one organization might choose to offer a free event, another may want to sell tickets. Whatever the case, we will find a way to serve you. As each event is different, and each presenting organization will pick the approach that best suits their community and outreach needs, we have various licensing opportunities available.” (From the Getting Grace website)

Getting Grace is that rare film that challenges its audience with the question, ‘what does it mean to be truly alive?’ It does not shy away from important themes or rely on clichés to tell the story. At the same time, it is a movie that understands how intertwined humor and tragedy are and how sometimes in life you want to cry so hard that you end up laughing instead. The film demonstrates how in life, many things are out of your control, but you can’t allow that to stop you from living fully.

Whether you plan to host a screening for your town or are just looking forward to having a movie in your collection that FINALLY reflects the true realities of being a funeral director, Getting Grace is something to celebrate. It will certainly go a long way in helping people to better understand the rewards and challenges of being a funeral director in a way no other film has done before.

If you would like to learn more about the movie Getting Grace or how your funeral home can get involved in spreading it’s message, visit www.gettinggracethemovie.com. You can also contact Daniel and his team directly at 818-613-2604 or danroe8@yahoo.com.